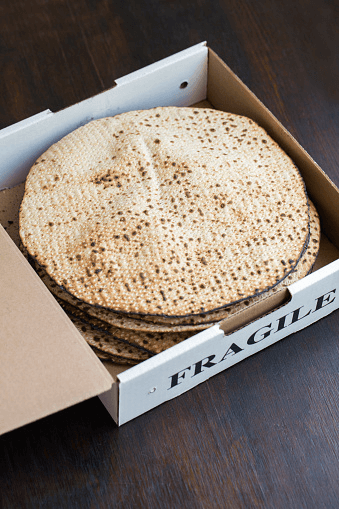 Is There Room To Be More Lenient On Pesach?

My family’s Pesach traditions are so strict and burdensome that I don’t want to observe the holiday anymore. The work is too much and I’m starving the whole time. Is there room for me to be more lenient?

Thanks for your question. As I mentioned last week, the prohibition against chometz (leaven) on Pesach is extremely serious, with the result that people take extraordinary steps to guard against potential violations. There are a number of different practices at a number of different stringency levels – Biblical, rabbinic, community and family.

At the Biblical level, we are not permitted to eat any of the five grains – wheat, barley, rye, oats and spelt – leavened. That may seem pretty straightforward but people take a variety of protective steps to avoid accidental consumption or even the misimpression of chometz.

Ashkenazi Jews – i.e., those of Eastern European descent – also don’t eat kitniyos (typically translated as “legumes,” though not all forms of kitniyos are legumes). This includes things like rice and beans, which were historically processed with chometz or that were prepared in a manner that might be confused with chometz.

In recent years, some have taken to disparaging the practice of avoiding kitniyos as “only a minhag.” They understand minhag as a custom, which they perceive as optional. This is incorrect. Minhag is a form of halacha, and it’s binding on members of a community that has adopted a minhag. And yes, there were great Ashkenazi authorities who opposed adopting the prohibition of kitniyos but that’s immaterial; the US founding fathers were against the idea of an income tax but the law was passed so you have to pay it.

Ashkenazi Jews also don’t eat “matzah ashirah” (such as egg matzah) on Pesach, though this might be eaten by the elderly or infirm.

An example of a community practice is not to eat “matzah shruyah,” AKA “gebrochts.” This refers to matzah that came into contact with water. This prohibition, which is common in Hasidic communities, is based on the concern that there might be small patches of flour in a matzah that are capable of leavening.

The Chabad Hasidim have a number of well-known Pesach customs, such as to refrain from virtually all processed foods, as well as from fruits that can’t be peeled.

Other things that certain communities or families avoid on Pesach include: salted fish; fresh fish; radishes; garlic; cinnamon; ginger; oil; dairy; black pepper; table salt; cloves; tea; poultry; gizzards; carrots; eggs with ink stamps on them; water from the sink; and machine matzah. Some refrain from tobacco, which, Pesach notwithstanding, is a good idea in general.

Other practices that some observe include not to eat any food that fell on the ground (again, just a good idea in general); not to eat with forks, because of the difficulty in cleaning between the tines; not to eat hot foods; not to eat in others’ homes; to boil sugar in advance and to use the resulting sugar water on Pesach.

While Judaism doesn’t normally advocate stringencies for stringency’s sake, Pesach is different in that stringencies are considered praiseworthy. Nevertheless, there are limits. For example, while space does not permit explaining the reasoning behind all of the aforementioned stringencies, they all have one; we are not permitted to adopt stringencies that are completely baseless. Similarly, one is supposed to keep his stringencies to himself; if asked a question of permissible vs. prohibited, one may only answer based on the actual the law and not based on his personal stringencies. (Remember: avoiding kitniyos and matzah ashirah are halacha for Ashkenazim!)

While a person is generally obligated in the stringencies observed by his community and family, one is not obligated to accept other stringencies, though one has that option. A person should, however, consider how others, like family members, would be affected by such a course of action. To absolve oneself of a stringency he previously observed might require hataras nedarim (nullification of a vow); consult your rabbi.

If you’re an adult living in your own home, you have the option to be matir neder (annul a vow) and relieve yourself of family stringencies or even most community stringencies. If you’re Ashkenazi, you’ll still be obligated when it comes to kitniyos and if you’re Hasidic, you might still be obligated when it comes to gebrochts, but if your family avoids stringencies like processed foods, unboiled sugar or eating out, you can probably get those things permitted.

If you’re an adult living in your own home most of the time but visiting your family for Pesach, you can discuss the matter with your family and see if they’ll reach some form of compromise with you. If they do, great. If not, you just have to stay home or go elsewhere. (Warning: this course of action is not likely to be met with enthusiasm.) Perhaps you could “split the difference,” such as by going to your family for the sedarim and then returning home for the rest of the holiday.

If you’re still living in your parents’ house… you may just have to wait until you grow up (if you haven’t already) and move out. You just can’t “do your own thing” in this regard anymore than you could make cheeseburgers in your parents’ kosher kitchen during the rest of the year. But what you can do is talk to your family and let them know you’re having trouble in this area. Again, your parents don’t have the authority to permit kitniyos but they might be willing to cut back on some of the stringencies that are not true prohibitions.

Hallel On Seder Night Is Different From All Other Hallels