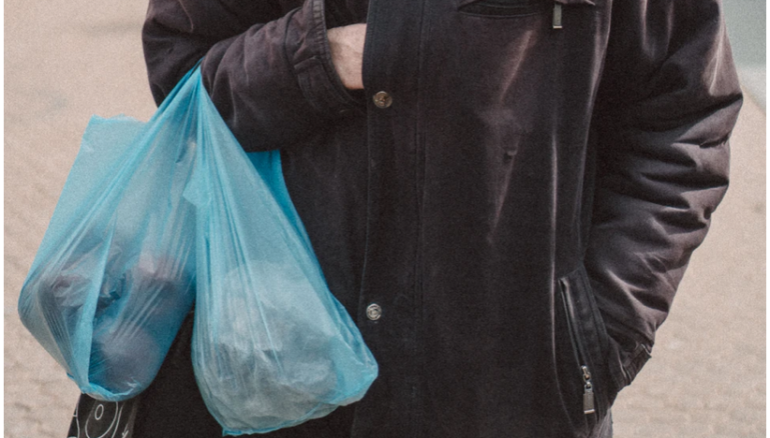 “Why Do Orthodox Jews Carry Plastic Bags” is one of the top questions trending on Google now if you search for Orthodox Jews, which is pretty weird, since that’s not the sort of thing I think we, Orthodox Jews, do a lot of. At the same time, this is not the first time this question has been presented to me. I thought it was weird then too!

The first time this question came up was when I was doing a corporate diversity training seminar for a medical organization in Manhattan. The clinic was getting a lot of Orthodox Jewish patients, and the medical staff wanted to know why their Hasidic patients were all carrying shopping bags instead of a purse.

I have to say, out of all the questions I was expecting to hear, this was not one of them. And frankly, I had no idea what they were talking about. There’s no reason a Hasidic woman wouldn’t be allowed to carry a purse. After speaking to some Hasidic friends, what I discovered is that when many Hasidic women come from Brooklyn or Rockland County, to go to a medical appointment in Manhattan, they will not miss the opportunity to also go shopping! So, yes, they are carrying a purse, but it is mixed it somewhere with all those shopping bags!

The second reason people may be Googling “Why Do Orthodox Jews Carry Plastic Bags” is because of the Jewish Sabbath. On Shabbos, there is a prohibition of touching objects we would use to do creative work – something we are not allowed to do on that day. That would include car keys and a wallet – things normally found in a purse. So women don’t carry purses on that day and if we need to transport something on Shabbos, like a book or a cake, many people just use a plastic bag, though some do use reusable tote bags.

I don’t think I use a plastic bag any more since I became Orthodox than in my pre-Orthodox days, but the idea of seeing people walking (on Shabbos) is an unusual thing, since most people drive to their destinations these days. So perhaps walking on the street, on Shabbos, carrying something (which more often than not will be in a plastic bag) is why this is trending on Google. But to be honest – I still don’t really get it!

UPDATE: Many of our readers believe that the characters on Shtisel, like Shulem and Chanina, carried plastic bags more often than they would have expected them too. Some noted that carrying one’s belongings in a plastic bag, as opposed to a backpack is the norm in charedi circles, so as not to waste money on an unnecessary luxury. I did not notice this in the show, but now must re-watch it! The weird thing about this topic is that as we hear from more fans and Haredi members of Makom, there is not a clear cut answer. Some Hasidic Jews are telling me they have so many pockets, they don’t need bags. Non-Haredi Israelis are telling me they also carry plastic bags.

One more idea that came up in several comments to this article – the need to pack kosher food. We just went to an amusement park during Pesach (Passover) and as a kid, growing up not religious, if we went to an outing, we’d just buy food there. Unless you’re at an amusement park that has kosher food you have to pack your lunch and snacks. So my family used an insulated backpack to carry our food, but inside our bag, we had…plastic bags.