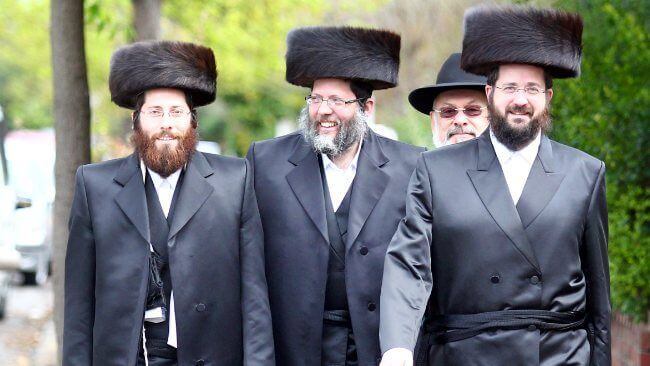 Thanks for your question. I’m sure you are familiar with the children’s riddle, “Why do firemen wear red suspenders?” The answer, “To keep their pants up,” only addresses why firemen wear suspenders. The question one should have asked is “Why are the suspenders worn by firefighters red?”

Similarly, I could just answer why Orthodox Jews wear hats. This, in fact, is something we have addressed in the past. I will infer, however, that the intention of your question is “Why are the hats worn by Orthodox Jews made of fur?”

As with most queries of “Why do Orthodox Jews do such-and-such?” the question generalizes something that is not truly universal. Sure, some Orthodox Jews wear big fur hats, but most don’t. The practice is limited to most Hasidic sects, plus to the Yerushalmis (a non-Hasidic Ashkenazi community in Jerusalem).

The fur hat in question is known by its Yiddish name, “shtreimel.” The shtreimel was adopted by Eastern European Jewish communities in the 18th century, coinciding with the rise of Hasidic Judaism. (Technically, a shtreimel is one particular style of hat; there are others. One that might be familiar on sight is the spodik, which is taller and more cylindrical than a shtreimel; a spodik is the style generally favored by Hasidic sects of Polish descent. To the casual observer, however, they are all “shtreimels.”)

A shtreimel is made from a large piece of velvet surrounded by fur. The fur usually comes from the tips of the tails of sable, martens or fox. (Synthetic shtreimels do exist; they are more common in Israel than elsewhere.) A shtreimel can cost thousands of dollars, so it’s not uncommon for a Hasidic man to own a second, cheaper shtreimel so that his main shtreimel will not be battered by the elements. While Yerushalmis start wearing a shtreimel at bar mitzvah, Chasidim start doing so at marriage; a shtreimel is often gifted to the groom by his new father-in-law. Shtreimels are only worn on special days with one’s finest clothes; they are never worn with weekday outfits.

The exact origin of the shtreimel is unknown but there is an interesting legend. According to the legend, a certain anti-Semitic noble issued a decree that Jewish men had to identify themselves by wearing an animal tail on their heads – kind of a precursor to the infamous yellow star. While the intention of the decree was to denigrate the Jews, the rabbis came up with a plan that would comply with the law but in a manner bestowing honor: they wove multiple tails into a crown-like shape, in the manner of royalty. (Prior to Napoleon’s 1812 incursion on Russia, Eastern European nobility wore such fur hats. They subsequently embraced more Western styles, leaving the shtreimel a uniquely Jewish garment.)

The shtreimel has no inherent religious significance but those who wore it decided to imbue it with relevant symbolism in order to make it more meaningful. One of these was to make the number of tails involved in its manufacture important. For example, most shtreimels are made of 13 tails to symbolize the 13 “Divine attributes” and/or God’s unity. (The Hebrew word echad – “One” – has a numerical value of 13.) Shtreimels made of different numbers of pelt have similar connotations. Another religious significance after the fact is Rabbi Pinchas of Koretz’s statement that the word “Shabbos” (spelled ShBT in Hebrew) is an acronym for Shtreimel Bimkom Tefillin, i.e., “shtreimel in place of tefillin.” (The shtreimel is typically worn on Shabbos and holidays – days on which tefillin are not worn.)

An interesting postscript: because of their shape, Stella D’oro Swiss Fudge Cookies are often referred to by Orthodox Jews as “shtreimel cookies.” Between the delicious dollop of fudge in the center and the fact that they’re parve (i.e., non-dairy), Swiss Fudge Cookies are a popular Shabbos treat, since they can be enjoyed after meat meals. In 2003, the company announced plans to replace the parve fudge with a cheaper dairy alternative. The plan so outraged the Orthodox community that Stella D’oro was inundated with requests not to change the formula. Ultimately, the company reconsidered the move, given that going dairy would preclude a significant portion of the product’s use. So even those of us who don’t wear shtreimels have strong positive associations with the identifiably Jewish shape.

How You Can Tap Into the Spiritual Energy of Elul