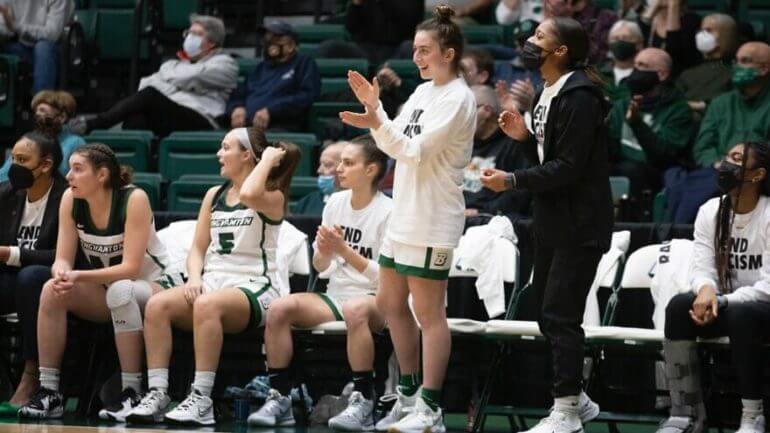 It’s not often you can point to the sports world as a place to find shomer Shabbat Jews. Lately, that’s changing with Ryan Turrell proudly showing his Jewish pride on the court and Jacob Steinmetz and Elie Kligman being drafted to the MLB.

Now, Mia Raskin is joining the list. While she’s not in the pros yet, she was recently recruited to be on Binghamton University’s women’s basketball team, a D1 school. It was a dream she had for most of her life, but unfortunately didn’t think it was possible due to her religious observance.

Growing up, she observed Shabbat and kashrut and those tenets remained non-negotiable. She grew up in Dallas, TX initially and then moved to Potomac, Md. with her family in 2002 when her father, Adam Raskin became the rabbi of Congregation Har Shalom there. As a kid and teen, Mia was obsessed with basketball. “I prioritized [it] almost over everything else,” she shared with the Jewish News Syndicate. “My parents bent over backwards. If my [games] were over Shabbat, even four miles away, we stayed in a hotel and walked.”

While she often had to make compromises or sacrifices for her faith, she never felt resentful. On the contrary, she only felt proud. “My [parents] raised us so that we never felt forced or coerced to be observant; it made me strong.”

When Mia got to college, she thought her commitment to Judaism would prevent her from playing, so she took on a role as manager of the women’s basketball team instead where she kept track of player statistics, worked on logistical issues for the gym and facilities and assisted the coaching staff in practices and games.

Then, this past fall, several players had to drop out due to injuries or coronavirus precautions so Mia offered her help, explaining her basketball background to the coach. While initially she didn’t take her up on it, she ended up getting a call while home on winter break with an opportunity to join the team.

“I finally felt like I would be able to live out my basketball dreams,” Mia said. She explained Shabbat and kashrut to her coach and teammates as simply as she could and was so pleased when she was received so warmly.

After she got that call, she had to drive back to school before the end of winter break to practice with the team, so didn’t have any friends or family around to do Shabbat with. Her teammates became her support and came over to be with her. “I made all of the food — dinner for 15 — cholent, deli rolls, schnitzel, challah. It was really special how interested they were so early on.” Mia even prepared a Shabbat dinner “cheat sheet” explaining how Kiddush works, hand-washing and hamotzi. “Everyone asked questions daily to try to understand. It was cool.”

Mia’s concern about not being able to travel with the team to games over Shabbat also didn’t come to fruition as much as she thought. She ended up being able to go to 16 of the 20 road games and had help from different Chabads on her way for kosher food.

While Mia isn’t sure what next year will bring, she’s so grateful for this opportunity and became a true kiddush Hashem to her teammates, the Binghamton community and any other hopefuls who have similar dreams. “At the end of the day, it was worth it.”

Why Do Orthodox Jews Cover Their Kitchens In Foil?

Is There Room To Be More Lenient On Pesach?