Do you want to train your staff to be sensitive to antisemitism? Do your employees interact with Orthodox Jewish or Hasidic customers? If so, there are likely misunderstandings, cultural differences, or stereotypes that arise. Let Jew in the City train your staff to be aware of antisemitic tropes and understand and appreciate Jewish beliefs, laws, and customs so that they can be culturally appropriate with colleagues or Jewish clientele and provide better customer service. Our clients include Con-Edison and NYU Langone Fertility Center among others.

"Allison the founder of Jew in the City conducted an excellent class. Her passion for diversity and thorough knowledge of Jewish history and faith was extremely useful in increasing the audience’s understanding, so that we can be more sensitive when interacting with members of the Jewish Community. Allison was personable, and always took care to answer our questions and clear any doubts before proceeding. Great job!"

"I just wanted to sincerely thank you for setting up today’s conference. I had the opportunity to understand and clarify all the misconceptions I had, and most importantly can now appreciate all the little things and reasoning behind it all."

"Allison’s talk was phenomenal! Great call bringing her here to speak. She was articulate, dynamic, and very clear in her explanations. I think it probably opened a lot of eyes and answered many questions."

Jews are one of the most persecuted minorities of all time, having been murdered or expelled in nearly every time and place. Despite making up only 2% of the population of the US, almost 60% of religious attacks were on Jews in 2020, according to the FBI. 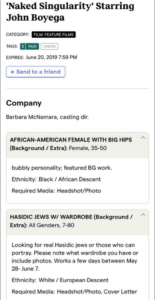 Representation for other minorities has vastly improved in recent years (due to the wonderful work of NAACP Hollywood Bureau, MPac Hollywood Bureau, etc.), while TV shows and movies continue to depict Jews stereotypically at best and vilified at worst. While directors generally cast other minorities authentically, Jews are often not cast to play their own parts, and anyone who slaps on a beard can play a “hasid” (see actual casting call).

While ex-Orthodox stories could be worthy of exploration, the over-representation of this genre in the last 20 years (see chart) implies that a religious Jewish life is one worthy of escape. While other minorities are in the writer’s room when their stories are being told, there has never been such a framework for the Orthodox community until now, nor have there ever been universal standards to prevent antisemitic tropes from entering characters and storylines. Negative portrayals have real world consequences, and the Jewish community needs nuanced representation on the screen in order to be safe on the street. JITC Hollywood Bureau will ensure just that by: 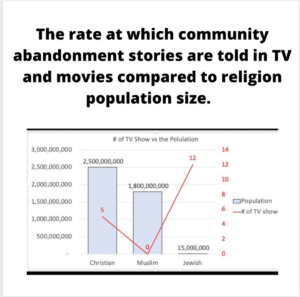 "There is nothing else like Jew in the City out there!"

"We could have used you at our table reading."

For more information about any of these opportunities, or to request one of these services for your company, article, or production, please fill out this contact form.

Want to bring Jew in the City to your city?

To inquire about or schedule a speaking engagement with JITC, please fill the form here. See below for a list of talks and topics and for a list of upcoming and previous events.

"You spoke with such charisma and magnetism! You had the audience
mesmerized by your presence! Thank you."

"I really liked how Jew in the City shares her experience in such an honest and relatable way."

"You are an amazing speaker. I loved you and so did my friend. You can really hold a crowd in tune to your talking the whole time!!! Wow!"

"Allison’s message was deep and meaningful. The girls and all the adults, myself included, who came to hear Mrs. Josephs speak are all FFB’s, we were and still are totally blown away by her story and have all been able to see a sunnier side of Jewish life."
"I wanted to write to you to tell you what a pleasure it was to hear you speak last Sunday at our synagogue… I became an instant fan. You explained things in an amusing and memorable way, and I was able to get my questions answered. I was excited to attend the event, okay I was a bit star struck, and to actually meet you in person was wonderful. I loved that you were able to tell stories about your personal journey that not only I, a 40 something mom/Hebrew School teacher, could relate to, but also made the older woman at the table find a connection.
I didn’t feel like I was listening to ” a speaker who came to talk about Judaism”, but rather, I felt as if you were a friend who could guide me to look at my spirituality and connection with HaShem in a new way.
By encouraging women to explore their Judaism and spirituality in “baby steps”, you made the challenges that becoming more observant require something all of us should be able to strive to meet. You explained things in a non judgmental way, so that we all felt embraced by our Judaism. Thank you for coming to visit our synagogue. I hope if you are in the Boston area again, I can hear some of your other topics."

"Allison Josephs came to speak at our school, RJJ in Staten Island, for the girls grades 7 and 8. Not only were the girls focused and entertained by the way Allison gave over her story, they found the talk inspiring and spiritually uplifting. The eighth grade could not get enough of her, they kept her for almost an extra hour asking deeper questions to get a full understanding of how Allison found Hashem and the beautiful love she has towards Torah and mitzvoth. I have received calls and messages from parents thanking me for organizing the talk by Allison Josephs."

Allison speaks on a variety of topics and uses humor and personal anecdotes to entertain as she inspires. She can also tailor a talk to fit your community’s needs. Some of her topics include:

The Women’s Circle of Chabad of North Fulton

NCSY and Friends of the Hebrew Academy

Sweet Up: A Shmoozefest for Bloggers and Brands, panelist

Spa for the Body and Soul, guest speaker