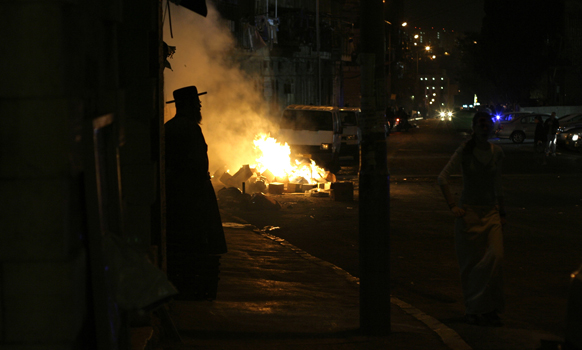 A recent headline showing some Chareidim burning an effigy of an Israeli soldier requires some response. As someone who is associated with the Chareidi community, I condemn such an act in the strongest terms. There are no “two sides” here, two different legitimate opinions within the Chareidi camp. Those who acted in this way, acted in a way that is entirely un-Jewish in many respects. Since they acted deliberately, they are no different from any sinner who must repent on what he has done. But to the degree that they caused a desecration of God’s name by creating anger at those who keep the Torah, their atonement can only come from repeatedly sanctifying God’s name with acts that create exactly the opposite, i.e. that sanctify God’s name by becoming visibly exemplary in their behavior in all respects.

In Judaism, it is actions, far more than views that count. We therefore need not make an attempt to understand the underlying views of such a group. Their actions have disqualified them from the honor of anyone trying to explain where they are coming from.

Fortunately, this handful of people represents only themselves. They take their mandate from no-one. The purported affiliation, to the Eidah HaChareidit, is false, for the Eidah Chareidit, reflecting the far-right of Chareidi Jewry, condemns such acts. I base this on conversations I’ve had with several dayanim in the Eidah.

The soldiers are holy, even in the eyes of the anti-Zionist Eidah Chareidit. Even if we take an anti-Zionist viewpoint, there is still a large population who need to be protected, and we never JUST relied on Torah learning. Jacob, our father, prepared for war against Esau, and we have a long and proud history of standing up, fighting and sacrificing our lives for that which we believe in.

What the Eidah, and much broader segments of the Chareidi world are debating is whether Torah-learners should be called up to the army in the prime of their yeshiva life. The majority of Chareidim have always supported a deferral (not an exemption) from the army only for those in full-time Torah study, in the belief that, if the State of Israel is not purpose driven by Torah values, then we will no longer know for what we are fighting. Moreover, they claim that a Jewish people who has defied normal historical rules since its inception will not do so if we ourselves fail to be committed to the very values on which God made a covenant with His people. But those Chareidim who are not studying full-time should and do, in increasing numbers, go to the army.

I am not writing here to present this issue, only to prevent confusion of two completely different issues. None of these groups have ever said that the soldiers who go to the army are tainted in any way. On the contrary, they have stated that we should be forever grateful to them. We should regard them as doing that Mitzva of Mitzvot, protecting their people.

I am in awe of the commitment, sacrifice and dedication of Israel’s soldiers. They put their lives in danger for all of us. They give two or three years of their life (without counting subsequent call-ups) for all of us. Some get injured and many have been killed in the act of defending the Jewish nation. These are considered Kedoshei Elyon – the highest of the holy people. No bunch of hooligans wearing Chareidi garb is going to push me off message. I denounce their desecration and I stand with our soldiers.