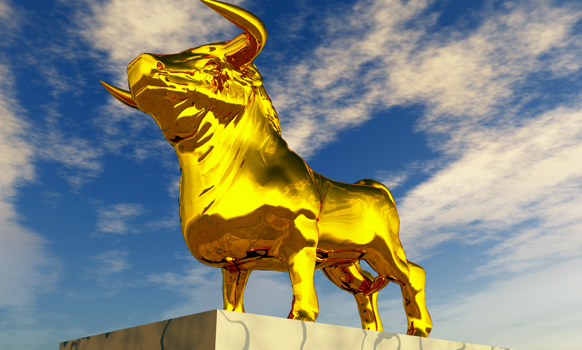 In reading the Exodus-related Torah portions, I just don’t understand the story of the golden calf. How could a people who had just seen open miracles so quickly turn to idolatry?

Thanks for your question. Actually, it makes perfect sense. I’ll explain.

We draw a lot of conclusions about people based on the words they use. For example, if someone commonly refers to God as “Hashem,” we might make certain assumptions about his background. If someone calls God “the Lord” or “HaKadosh Baruch Hu,” we might make different assumptions. While all these terms refer to the same Being, the choice of Name employed suggests – rightly or wrongly – that a person has a particular mindset.

Similarly, if we hear a person say, “I have to pray,” most people, even Jews, might picture congregants on their knees with their eyes closed and hands clasped. If he were to say “I have to meditate,” we might envision someone seated in the lotus position, trying to clear his mind. And if he says “I have to daven,” we might think of Jews with curly sidelocks and black coats swaying back and forth. All of these terms could be used to describe the same experience of communing with God but because of the cultural assumptions we make, we pigeonhole worship into segments. We associate the way people talk to God rightly or wrongly with the nomenclature used.

When we hear about the golden calf, we automatically make certain assumptions. This is because we culturally associate such things with idolatry. But this is not necessarily what was going on with the Jews in the wilderness! We assume they thought a statue of a cow was somehow divine but that may just be a logical leap on our part.

If you were raised in India, China or Saudi Arabia, you would no doubt have a different “default” idea of how one talks to God than you do if you’re from North America or Europe. If you had no instruction and were left to your own devices, you would probably just emulate what you had seen all around you. Similarly, someone raised in ancient Egypt had a very different idea from us about how to pray. Left without guidance, the Jews did the only thing they knew how to do, based upon the culture in which they were raised. We assume it was idolatry but that wasn’t necessarily the case.

The Kuzari explains that everyone at the time of the Exodus worshiped tangible objects. There were surely people who believed in a non-corporeal God (or “gods”), but even they required some physical object upon which to focus their attention. In this, the Jews were no different from the society in which they were raised. For example, after their departure from Egypt, the Jews focused their attention on the pillars of cloud and fire that led them by day and by night. They knew these things weren’t God, they were just concrete phenomena towards which they could direct their thoughts.

So Moshe ascended Mount Sinai and the Jews were waiting for him to return with the luchos, which would serve as another physical manifestation of God’s greatness upon which they could focus. But Moshe was gone for forty days and there was some confusion as to the count so the people got anxious. Out of frustration, they demanded some other physical object upon which they could focus. This may have been misguided but it was intended to serve as part of their service to God. Their error was in fashioning an idol (which God had prohibited) and ascribing holiness to it. The Jews did not intend to reject God through their actions, but they did reject some of his mitzvos by trying to take the law into their own hands.

The Kuzari compares the actions of the Jews who served the calf to those of a patient who injures or even kills himself by self-medicating when a doctor could have saved him by administering proper dosages. The calf didn’t feel like a grievous sin to them – and it was certainly not their intention to worship idols! They were merely grasping on to a mode of worship that was as familiar to them as a shul is to us. (The Kuzari also contextualizes that only 3,000 of the 600,000 men who left Egypt worshiped the calf. That’s 1 in every 200. The other 199 out of 200 did not stumble in this area.)

It should be noted that even the Temple, holy as it was, was a concession to the way people were used to praying. The Rambam in his Guide for the Perplexed discusses how the Temple is really a kind of religious “half-way house.” People were used to temples with priests and sacrifices so God gave them that, albeit in a very limited fashion.

There was only one Temple, in Jerusalem. Sacrifices could not be offered elsewhere. One couldn’t train to be a priest, he had to be born into it. And there were a dozen different types of ritual impurity, ranging from bodily emissions to unclean carcasses, any of which would keep a person from being able to visit the Temple for a period of time. God gave us a Temple but He seriously limited the extent to which we could interact with it.

Contrast this with synagogues. Synagogues are everywhere. If they don’t happen to be found in a particular locale, that’s not by design; synagogues could potentially be built in any city, state or country. One can attend the synagogue at any time, ritual purity or impurity notwithstanding. As much as God limited our use of the Temple, that’s how unlimited our ability to attend shul is. (And make no mistake: while we tend to think of synagogues as replacements for an absent Temple, that’s not entirely true; there were synagogues in Temple times as well. There was even a synagogue as part of the Temple complex, so the two modes of service were always in operation at the same time.)

As we have seen, the way we worship and the way we understand different forms of worship is very much a factor of the times and places in which we are raised. Make no mistake, the Jews who worshiped the golden calf were definitely in the wrong but as much as we look at the incident and scream “Idolatry!” such was not their intention. They were victims of an extremely misguided attempt to get closer to God by emulating the only kind of service they had ever seen. Was it bad? Yes. But upon reflection, it was perhaps not so inconceivable after all.