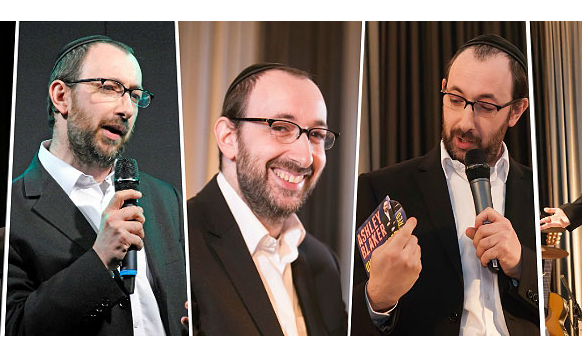 What’s the key ingredient to help a secular Jewish BBC producer achieve his life-long dream of becoming a stand-up comic? For Ashley Blaker all it took was becoming ultra-Orthodox. Blaker grew up in a traditional home in the UK and attended private  school – the same one that Sacha Baron Cohen went to. He had dreams of being a comedian as a teenager and used to participate in open mic nights. “I’m a quiet person and people who meet me can’t believe I perform as well. I would do 40-minute sets in the lunchroom at school.” He even appeared on TV a few times, having tried out as a contestant on game shows. Even so, his hopes of being a comedian failed to materialize for many years.

His big break in his TV career came when he reconnected with an old mate from high school, who happened to be rising star, Matt Lucas. Blaker became a producer and a writer, working on many hit comedy shows in the UK, with stars such as James Corden, Russell Brand and John Oliver. He went on to produce Little Britain, which became a smashing success.

After he and his wife were married, they were given a year of free membership to the synagogue closest to their house which all newly weds in England are offered. It happened to be Orthodox, and Blaker was slowly roped in to help with minyanim and grew in his Judaism from there.

Blaker’s growing observance was a shock to many he knew from the entertainment industry. “One day, I turned up wearing my kippah. They said ‘is it some special holiday today? What’s going on? Why are you wearing that?’ It was a gradual thing. Then a few months later, tzitzits hanging out, then the clothes white and black, and then the hat and the payos are growing longer. Something new every day.” Matt Lucas used to go to meetings with Blaker and introduce the two of them saying “I’m Jewish, but this guy is a real Jew. He’s not gonna shake your hand. Go on, stick it out, See what he’ll do.” That would make light of it and ease the tension of the situation.

Despite his continued TV success, deep down Blaker still had a desire to keep performing. “A rabbi rang me one day and said ‘Would you come to my shul and speak at a Melaveh Malka?’ I thought, I’m not a rabbi, why would you want me? But he said ‘No, you’ll come along and talk about [how] you worked at the BBC, you worked with big stars at the time and you’ve got peyos and you’ve got tzitzits out, you wear a black hat and you don’t shake hands with women…’ I said, ‘You know I work in TV but I don’t own a TV.’ [He thought] people would be interested to hear about it.” Blaker agreed to speak and from there his internationally-acclaimed comedy career began! His first tour, “Ungefiltered” sold out along with his second tour “Meshuga Frum.”

“In a way, it was actually becoming frum that gave me a way back into performing. As a 16-year-old, I didn’t really have a defined…proper subject that I really wanted to talk about [onstage].” When Blaker became frum that all changed. “It gave me something I actually wanted to talk about: the experience of being frum and what its like.” Breaking down stereotypes about Orthodox Jews in comedy is key to Blaker’s routine because as he says, “my audience is really broad…it’s a complete mix of [different kids of Jews], from shaitels and hats, to completely unaffiliated, progressive, reform, conservative: the entire range. Blaker finds that after a show, frum people don’t understand what the secular Jews are doing there, just as the secular Jews wonder how the frum Jews will get his references. “It’s for us, it’s not for them.” And they all sit together.” Last year, Blaker did a show in Newcastle. He had a row of 10 guys from Gateshead Yeshiva, and next to them was a female reform rabbi. “I genuinely couldn’t think of another occasion in Jewish life where these people would be coming together. I’m kinda proud of that.”

Editor’s note: The article originally noted that Blaker grew up “Conservative” and attended a Jewish private school but has since been corrected. We regret the error.