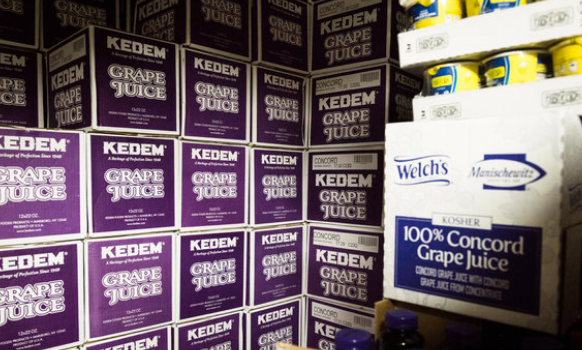 The Grape Juice Wars of Passover

Orthodox Jews bless and drink a cup of wine three times on the Sabbath and four times at each of the two Seders for Passover. The almost 150-year-old American titan of grape juice: Welch’s, whose name is practically a synonym for grape juice, and the 129-year-old Manischewitz, the world’s largest matzo manufacturer and a kosher wine and food producer, have set off a fight with the long-reigning emperor of kosher grape juice, Kedem.

Kicking off Soul Searching TODAY, a new series focusing on people seeking deeper meaning in their lives, Jenna Bush Hager spotlights Abigail Pogrebin, who at the age of 50 decided to make a deep commitment to the rituals of her Jewish faith. This in-depth look at a baalas teshuva journey is the first of its kind on television.

The annual event started in 2009 and was held every year of the Obama administration. This year, the tradition shifted to a new White House team and guest list.

How Complicated is it to Make the 2-ingredient Passover Matzo? Very

The country’s largest producer of Passover matzo is the Manischewitz Co.in Newark, N.J. Rabbi Aron Hayum, the plant manager, notes that while matzo contains only two ingredients: “It’s just flour and water. How complicated can it get?” In fact, it’s very complicated.

Founded and run by a Hasidic Jew, Masbia is a restaurant without registers open to all people who need a meal. The Boro Park Kosher Soup Kitchen serves “all who are hungry” on the holiday.