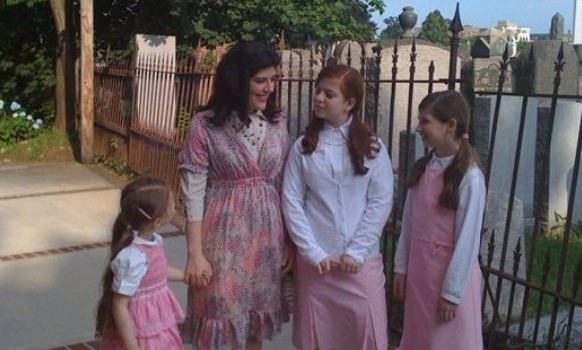 Read The Groundbreaking Orthodox Film Story That’s Now An Award Finalist
The Haredi world is generally viewed as an insular patriarchal community that shuns movies, but a fledgling, shadow film industry has been growing quietly for a decade within the confines of this improbable universe. These flicks — dozens of them — are produced, scripted, directed and performed by women.

Taoist Man Snaps Viral NYC Subway Photo of Hasidic Couple, Muslim Mother on Easter Sunday
Jackie Summers snapped a heartwarming photo onboard an F train — and the image quickly went viral as social media users touted it as a symbol of New York City diversity. “A Taoist (me) gives up his seat so a Hasidic couple could sit together, [then] they scoot over so a Muslim mother could sit and nurse her baby,” said Summers of the photo, which had been shared over 31,000 times as of early Tuesday. “This is my America: people letting people be people.”

Harry Styles’ New Direction
In this in-depth article by Cameron Crowe, Harry Styles’ success is credited to a number of factors, including his friendship with Ben Winston, an Orthodox Jew and producer of The Late Show with James Corden. “The Winstons’ Orthodox Jewish lifestyle, with a strong family emphasis, helped keep him sane.”

I Traveled the World Getting Advice on How to Be Married in 20 Different Countries
How to Be Married author Jo Piazza collected marriage advice from around the world: “My favorite sex advice came from Orthodox Jewish women in Jerusalem. Many Orthodox couples only have sex during specific times of the month. Husbands and wives don’t even touch one another for about two weeks out of the month. The rest of the month is fair game. An Orthodox woman around my age told me, ‘Quality over quantity. The two of us move apart for part of the month in order to get to know ourselves better and then come back to each other more complete. It keeps the passion stoked.’”

Israeli Film Director Takes a Leap With Gere and ‘Norman’
Academy Award-Nominated writer-director Joseph Cedar makes his American movie debut with Norman: The Moderate Rise and Tragic Fall of a New York Fixer, starring Richard Gere. As an observant Modern Orthodox Jew, Cedar is an anomaly among the more hedonistic film colonies in Tel Aviv and Hollywood. When his film was Oscar-nominated, Cedar wrestled with participating in a panel without violating Shabbat laws; he didn’t mind walking a few miles from his hotel, but didn’t know whether he could use a microphone. Cedar phoned his rabbi in Israel and together they found a solution.