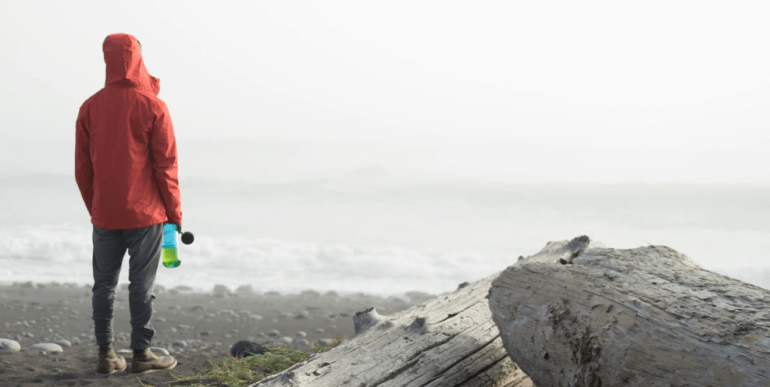 It is near impossible for me to describe the influence that you’ve had on my life. I will try, for better for worse, to detail where I was when I found you, and where I am now. To show how you revealed the path for me to heal from the depths of emotional angst and anger, and to finally obtain that inner peace that I had so longed for. To tell the story of how you guided a lost, broken teenager to becoming a happy, self-actualized young man.

When I first discovered Jew in the City’s Makom branch, I was in a dark place. I could best be described as despondent, angry, dejected, lonely, and to put it simply, in pain. At 19, I had just recently finally thrown in the towel and left the yeshivah life that I had so aspired to succeed in. The fallout of that decision was immediate, in the form of constant emotional turmoil and even harder intellectual confusion.

Where was I going? Is there any happiness to be found in a life outside of yeshivah? Would I ever find inner peace, or were my rabbeim right when they’d told me “there’s no life out there?”

When I left, the door closed behind me with a resounding slam. The resounding rejection reverberated loudly in my heart for the next few months.

Is this really what the Torah teaches? Is this what true Judaism actually looks like? Is the love of a proper Jewish parent really meant to be so conditional? If it is, the behavior of my family and my community could only mean one thing. To me, it showed that Judaism is truly the evil religion that I was beginning to suspect it was. I had no interest in serving a God that dictates his followers so.

And it wasn’t only emotional angst; my intellectual side was thoroughly confused as well. I had loved learning Torah, but the ideals with which it was presented to me simply did not line up. I was taught that all people are created b’tselem Elokim, but at the same time, non-Jews were denigrated. We love our children and are commanded to protect them, yet we would not report an abuser to the proper authorities. Nor would we step in and save a child from an abusive home. God commands a man to provide for his wife and children, yet somehow, we had collectively decided that it is better for a man to sit and learn Torah all day.

In the Judaism in which I was raised, the amount of money that you paid for your esrog said more about your religiosity than the amount of time that you spent with your children.

Learning Torah had become the be-all and end-all of a person’s value. The message I absorbed was not one of unconditional acceptance, but one of proving my worth as a human being through studying Torah. This way of life did not add up to me.

Back in those days, I spent a lot of time thinking about the well-known story of Hillel and the convert. A potential convert came to Hillel and demanded of him to teach the entire Torah while he was standing on one foot. The sage’s famous response? “What is hateful to you, do not do to another: that is the entire Torah, the rest is just commentary.” This was not the Judaism I was raised with. The Judaism I had been taught to believe in commanded no such thing.

Before I met the wonderful people at Makom, my idea of God consisted of a monster in the sky who spent his time counting up the transgressions of His supposed children. Growing up, I had absorbed the idea that He is constantly watching not to protect us, but to ensure that we are following His commandments. To gleefully count up our slip-ups and to compile a list that He can punish us for.

This is when I discovered Makom. Almost by chance, I had seen it somewhere on social media through Jew in the City. The tagline – the sheer audacity of the declaration – that Judaism is not indeed evil, had challenged me to sign up and become a member.

To me, joining Makom was a last-ditch attempt to find meaning in the religion that my ancestors had lived and died for. It was the hope that somehow, I may indeed find Judaism to be a religion of kindness and love, instead of one of rejection and fear. To find that the practice of Judaism doesn’t have to be inherently contradictory. That the fallacies of my upbringing were actually human fallacies and not proof that God is evil and vicious.

Would I find beauty in the way I was raised? Was there a baby somewhere in all that bathwater? Or were the problems of my community in fact reflective of the intent of the Torah? This is what you challenged me to discover, and oh boy, discover I did. Today, almost a year later, I reflect back on all that I have learned. That Judaism is indeed benevolent. That Judaism – nay, God – allows for mistakes. That it really does welcome questions, and that it is – surprisingly – strong enough to withstand scrutiny. That faith is ultimately a choice to make and not one to be made under the fear of the fires of Gehenom.

Most importantly, I’ve learned that Judaism is not a religion of reclusiveness close-mindedness, but a path to navigate modern times. That it is a timeless guidebook for the streets of life, be they in the first century or the twentieth. Makom gave me the confidence to revise my idea of the religion with which I was raised. It showed me that Judaism gives the gift of a God who is rooting for His children. Of a God who is kind loving. A giving God, who teaches us to follow His beautiful path for our own benefit. The gift of a God who understands our pain and struggles. Who encourages our journey of self-discovery and healing.

Makom showed me the way to rejecting the twistedness with which I was raised. It allowed me to realize that we’d somehow taken a religion of love and kindness, and twisted it to become a cold, hard book of rules. That we’ve taken our beautiful, God-given book of life, and turned it into a frightful manifesto of threats and punishments. It has been a long journey for me, and it is far from being over. At every step of the way, Makom has been there for me. Through Makom, I’ve been exposed to wonderful people, who have in turn shown me a most beautiful way of life. People who are genuinely living our religion of kindness and loving, of acceptance and virtue. People who are ever so happy to bestow that gift onto others, to light another’s candle, to spread the light.

Makom has held my hand through questioning and exploring my very identity. Through Makom, I was able to turn away from the despair, confusion, and anger to which my upbringing had brought me. I’ve instead been shown the path to internalizing the hope, happiness, and acceptance that true Judaism teaches.

Makom, a “thank you” would truly be inadequate here. A simple expression of gratitude falls far short of a full appreciation of the good in my life that you are responsible for. Instead, the greatest appreciation I can possibly show is to continue on the path that I’ve been shown. To work on fully realizing the beauty and fruitfulness that I’ve seen. To actualize all that you’ve shown me to be true; that indeed, “She is a tree of life to those who grasp her, and whoever holds on to her is happy.”

Written with gratitude and appreciation from the depths of my heart,

This Traditional Elul Prayer Gives Me Strength in Tough Times