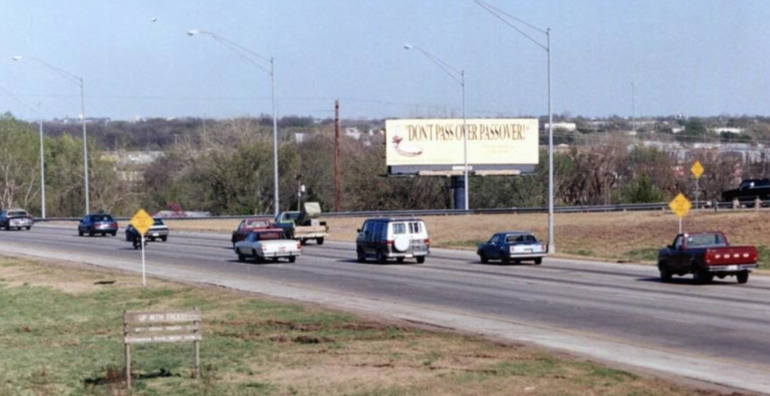 How a Billboard in Oklahoma Ignited My Path to Observance

For the past few months, I’ve been writing a weekly article for Jew in the City, celebrating amazing people who shine a positive light on Orthodox Judaism. But this week, I’m going to celebrate myself. I’m reflecting on a memory that surfaced strongly for me earlier this year, when I turned the big 5-0.

Don’t fret if you missed it, but the special milestone of turning 50 made me reflect on something that led me to that day, nearly thirty (!!!) years before.

On my birthday, I began to reminisce about the beginning of my Orthodox Jewish journey, the one that ultimately led me to Jew in the City.

It begins in Oklahoma – of all places.

Flashback to 1990-something: I was student at Northwestern University and not religious by any means.  I was, however, on the rowing team. During Spring Break, we trained in warmer climates. One year, we trained down in Austin, Texas. Great city. Great rowing. Not great timing. I completely forgot that it was Passover that week.

Fortunately, that first night of Passover, I found a seder at The University of Texas. The second night, however, we were on a bus, headed back to Chicago. I was feeling sad and angry with myself.

Then all of a sudden, at that exact moment, I looked out the window and I saw something that would change my life.

It was a billboard that read: Don’t Pass Over Passover.

I couldn’t believe it! What were the chances? The billboard whizzed by. But I got the message. It was Passover and I had a job to do. I asked my teammates if I could tell them the story of Passover. It’s wasn’t a seder but by telling the Passover story, I felt a little better.

But deep down, I felt something powerful stirring inside: Not only would I never miss a seder again but I was going to step up my Jewish game.

I was in Chicago for a Northwestern football game with my son Oren. We had Shabbos dinner with the Chabad Rabbi on campus. Like I often do, I shared how I became more Torah observant later in life. But as a campus rabbi, he was most interested in Jewish memories from my college years.

For the first time in decades, I remembered that billboard in Oklahoma. As I told that story, his eyes lit up. He knew the billboard better than anyone. His father is the Rabbi in Tulsa and put that up billboard way back in 1992, the billboard that changed my life.

A few weeks after my trip to Chicago, I received an email from the Northwestern Rabbi with a picture of the billboard. I remember that billboard like it was yesterday.

The lesson is clear. Keep your eyes open, all the time; Divine providence is all around us – usually when you least expect it. As I reflect on my 50 years, I thank God for my journey, the one that led me down the highway and right past that billboard in Oklahoma.