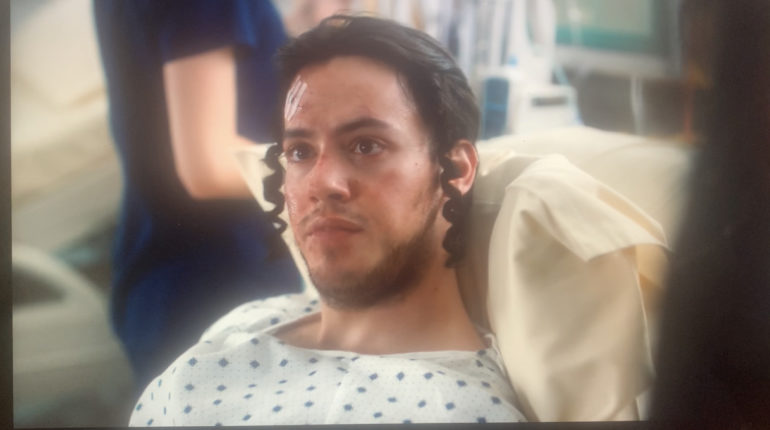 UPDATE: We’re thrilled to announce that NBC has pulled this episode after we broke this story and it went viral!

If you’re up in arms about the SNL joke that aired this past weekend, claiming that Israel only vaccinates Jews against Covid, be prepared for more outrage. NBC has another apology (and hopefully further education of its writers) to make.

In its new show “Nurses,” (episode 8, which aired a couple weeks ago) we are visited by the token Hasidic Jews who must appear once in every TV drama (can someone teach Hollywood how to curl peyos?!)

We meet Israel, a teenage boy who has been in an accident, and his father who he calls “Abba,” (but would actually be “Tatty,” if anyone in Hollywood cared about accuracy). “Abba” is the one-note Hasid who must always be serious. He invokes the “Creator” as the savior of the day which allows the nurse to pushback and offer “medicine” as the true helper. This interaction begins a major theme of the show – that our choices are binary: believing in God or medicine – never both together.

Then we find out that naughty Israel has skipped shul to play basketball –  a sin which will “pull him away from yeshiva,” according to his father. Now there are certainly extremist families where basketball is forbidden at a certain age, but as is the practice in traditional media – the behaviors of the worst, most extremist elements of Orthodox society are publicized, while all the reasonable and balanced Orthodox Jews are never featured. This one-sided depiction reinforces to the audience that within Orthodoxy, there is only one choice – fanaticism.

But if you weren’t offended yet, buckle up, because then the show really gets nasty. Israel is told by the doctor that he’ll need a bone graft to fully heal. Israel doesn’t understand what this means, so the doctor explains that he’ll have to have part of a dead person’s bone surgically inserted into his leg.

Cue the horror! Israel and his father are distraught at the notion that he’ll have a dead person’s body part in his body and that it will be a “goyim”[Sic] part to boot! But even worse than that – it could be an “Arab” body part or an “lady” body part. Or as the nurse reminds them, “an Arab lady” body part. (See this disturbing clip in my video explanation below.)

Despite my invitation to Hollywood producers to consult us when they do their “token Hasidic Jew” episode, Hollywood insists on remaining ignorant and promoting lies about the Orthodox community. Let’s unpack how badly they did with this aforementioned scene:

Now, are there Orthodox Jews who look down on non-Jews and Arabs? You betcha. And are there Orthodox Jews who are misogynists? Unfortunately, yes for that one too. But the idea that such a surgery would be problematic in general or problematic because of where the bone came from not only is categorically false according to Jewish law, it is a vicious lie that endangers men who walk around with curled side locks and black hats.

But wait – there’s more. We learn that Israel’s father would prefer for Israel to not get the surgery and not be able to walk properly again, so he won’t commit the “sin” of ever playing basketball. Israel resigns himself to refusing medical help. Why? “Because it’s God who heals what He creates.” No – that is how Christian Science works! Religious Jews believe that God heals with the help of the best medicine of our times.

The nurse continues to attempt to persuade Israel to save himself, but he responds, “How can I live with myself knowing that I went against God?”

Then we find out that the atheist nurse is in fact a Biblical scholar! Super convenient! She quotes some verses from the Book of Samuel about how sometimes human needs need to come before devotion. She’d be making a great point if she only educated herself on the part of Jewish law that tells us that following the best medicine of our times IS part of our devotion.

The nurse’s Biblical knowledge piques the father’s attention, but of course, in order to highlight the most extremist Hasidic behavior that could possibly exist, the father is not able to speak to the nurse directly (even though the teenage son can – we are not given a reason for this). Getting to see the father only speak about, but not to the nurse, is just one more reminder how much Hasidic men hate women and their bones!

Again the nurse tries to help Israel, by saying that she is a messenger of God here to heal the boy. That’s exactly what Orthodox Jews believe! But not these Orthodox Jews. They believe in refusing medical help and that “loyalty to our community is loyalty to God.” The father tries to explain his decision – he wants what’s best for his son – which means protecting his son’s “eternal soul.” How neat would it be if Jewish law allowed the father to protect his son’s body AND soul by using modern medicine – oh wait – it does!

And because this show really, really wants to beat the viewer over the head with those diametrically opposed choices: medicine or prayer, this dichotomy is mentioned one last time and prayer is chosen. Israel gets wheeled out of the hospital, flanked by men in black, the viewer knowing this “poor” Hasid will never properly heal because his crazy religion prevented him from being treated by doctors. The nurse then narrates Israel off to his pathetic future, as her head voice wonders, “What do we do when we can’t save someone? Faced with a battle that can’t be won?”

I was asking myself this same question about the writers and producers of Hollywood. Can we save you from your smug ignorance? Can you learn from your mistakes or will you insist on doing this again and again?

As an aside, another theme of the episode, involving other characters, was kidney donations. If the writers ever bothered to learn about Orthodox Jews, they might discover that they, and specifically Hasidic Jews, are OFF the charts when it comes to donating kidneys to strangers– 15% of all altruistic donors in the U.S. are Orthodox Jews, even though we are only 0.3% of the population. This includes to people outside of the community. Can you imagine if NBC did an episode about that? Why Hasidic Jews might even be likable or seen as human!!

Hasidic Jews are being attacked in the streets with greater frequency every single day. Do better, Hollywood, at not constructing pernicious lies that endanger our community.