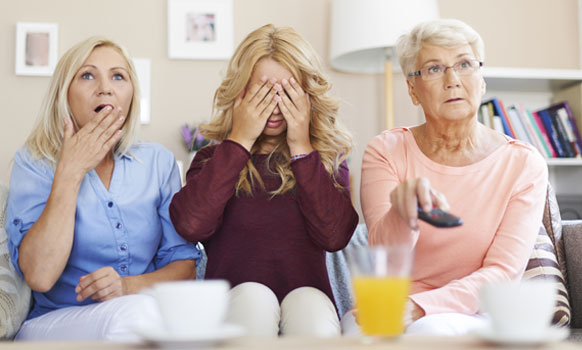 TVLand Network’s Younger, now in its third season, is a comedy series set in New York, starring Broadway sensation Sutton Foster as Liza, a forty-year-old divorced mother who realizes that in order to get a job in publishing, she has to pretend that she’s in her mid-twenties. Few people know the truth, other than her lesbian roommate Maggie (played by Debi Mazar).

In a recent episode, Maggie, who is not Jewish, becomes interested in Malkie, an observant Jewish gay woman. Maggie accepts an invitation from Malkie to a gathering at a woman’s boutique, but realizes the boutique caters to Orthodox Jewish women and wonders if she misread Malkie’s signals.

Maggie then meets Malkie at a bar where Malkie’s ex-girlfriend is also hanging out, and Malkie and her ex discuss how there’s going to be a big get-together at the mikvah they will both attend. Full stop. This storyline makes no sense. A mikvah is not a place for a social gathering. In fact, there are specific laws within Judaism which prevent a woman from mentioning to others who she saw while she was there so that privacy is maintained. Furthermore, a mikvah’s main purpose (other than for conversion) is to reunite a husband and wife after a period of separation.

Of course, once mikvah is introduced into the storyline in such a ridiculous way, it only goes downhill from there. Maggie decides to join the gathering and from the moment she enters the building, it is nothing but an over-the-top, inaccurate, and downright offensive portrayal of the Jewish ritual bath. Upon “checking in” to the mikvah, the receptionist offers to take Maggie’s wig (she’s obviously not wearing one and looks at attendant like she’s crazy), like a person’s coat would be checked at a restaurant.

Next we see Maggie in locker room with other people which is nothing like the private preparation rooms that actual mikvaot have in order to keep the experience discreet and comfortable for each attendee. But the scene that really takes the cake, is the “mivkah” itself, which looks like a giant pool with a group of nude women swimming in it all together. That is until Maggie attempts to join the “group swim” and her cross tattoo is visible to one of the women, who screams “There’s a shiksa in the mikvah!” The site of a “shiksa” is obviously terrifying to the women in the “mikvah” (because don’t you know, religious Jews hate non-Jews) that they all frantically dash to the edges of it to get away from said “shiksa.” And if the entire scene weren’t offensive and inappropriate enough, the entire mikvah is then drained. Because “shiksas” have cooties. Or something.

TV comedies are obviously supposed to be funny. And yes, I do have a sense of humor. But I don’t think that mikvah or Orthodox Jews are fair places to go for jokes and here’s why: How can you make fun of something that almost no one watching knows about? Homework – most people have had it – so that’s fair game. Barbecues – most people have been to one – so that’s fair game. Sunshine – everyone has seen it, so since they know what the real things is, showing it in an extreme or silly way will not cause viewers to not know all the wonderful things about the sun. But mikvah, even most Jews have never been to one or know to many actual things about it, so shows like these simply spread misinformation.

Mothers? The quintessential TV joke. Same with kids. Why are those fair people to poke fun at? Because viewers have a wealth of other mothers and children to base their knowledge on. Not so with Orthodox Jews. When you show Orthodox women frantically running away from a gentile, unfortunately, for some people watching, that scene will inform how they view other Orthodox Jews. TVLand did an awful job on mikvah, which is why we’re so proud that at Jew in the City, we can present to you a video filmed at an ACTUAL mikvah with real live *facts*. And guess what? It’s even a little bit funny!

How Do You Stay Warm (And Stylish) In A Skirt During Winter?