In just a short time, Jews all over the world and from all walks of life will once again read the beautiful Purim story. It’s one for the ages: how the Jewish People were saved through the hands of Esther and Mordechai from a bitter enemy that threatened our annihilation. There are so many layers to the tale and so many facets, with lessons to be gleaned from all of them. But there is one lesson in the Megillah that is often overlooked.

It is from the words which our enemy Haman said to Achashverosh, the Persian king at the time. There is always something we can glean from how our enemies perceive us as it often contains a kernel of truth. When first mentioning the Jews to Achashverosh, Haman said to him, “There is one nation scattered and dispersed among the nations throughout the provinces of your kingdom.” These words hint to the fact that the Jewish People at the time were not only scattered in the physical sense, but in the spiritual sense as well. They were deeply divided, spiritually, politically, and psychologically. Many had partaken of Achashverosh’s feast, despite it involving transgressing some commandments in the Torah. Others chose not to. Some held allegiance to the King, others chose not to. When the Jewish People are most divided, that is always when we are most vulnerable. That was the moment when Haman enticed Achashverosh to issue his decree against the Jewish People, and he almost succeeded. In fact, it is the unity that the Jewish People experienced later in the story, when days of prayer and fasting were enacted by Mordechai, that led to our salvation.

So how do we today, rectify our current problems of disunity when we celebrate Purim? The commentators find an allusion to this in one of the beautiful commandments of the day that are mentioned in the Megillah; namely Mishloach Manos, that is, giving gifts of food to our friends and neighbors. But according to Jewish Law, the ideal way to give these is not to our friends, but actually to those with whom we don’t normally get along. A gesture of kindness through a gift to all of those in our circle, even those that are different than us (and even our enemies) is an extraordinary way to rectify our divisiveness.

This does not mean the Jewish People should not have diversity. In fact, the artistic definition of true beauty contains a balance of diversity and unity. Painters typically juxtapose complementary colors to help bring out the lush vividness of each color. In music, it is often multiple instruments playing different notes, and sometimes even opposite notes, that help bring out the beauty of the orchestral whole that makes music so rich and cohesive.

I never appreciated the diversity of the Jewish People until my first experience at the Western Wall on Friday night for Shabbos services. For the first time in my life, I prayed, sang, and danced with just about every Jew imaginable: the secular, the religious, the Hasidic, the Zionist, and the Soldier. It was there that I truly experienced the colorful palette that comprised our People. Yet, we still felt as One.

Sadly, we live in a world with so much divisiveness and hostility among ourselves, especially politically and religiously. The flames are often further ignited on social media, when once-close friends and family have their relationships severely strained due to disagreements. I have struggled on a personal level with feeling a sense of unity with those whom I have differed with either politically, religiously, or both. I have also been guilty of defriending on social media, or experiencing strained relationships in the past year.

In trying to rectify this, I have discovered what has worked for me. Before making a post on social media, I take a deep breath and ask myself, “Will this post help to make the world a better place? Or will it contribute to the ugliness in the world?” I have come to think that what I post on my Facebook Wall, is like hanging a giant sign on my living room wall, with all of the curtains wide open for all to see. Will the message I share be one that embodies unity or division? Will it help people to have a better appreciation and love for the Jewish People, or just the opposite?

Now, when I become agitated about a post I see, I stop and take a moment to reflect. Is this really worth ending a friendship for? Don’t we usually have more in common than not? Aren’t there things about this person that I still love and appreciate, that it is not worth letting a post come to divide us? Over time, I have seen how these simple strategies have helped me grow as a person. In fact, they have inspired me to feel the strong sense of unity that is so fundamental to our faith.

Purim is a joyous holiday filled with warmth, love and laughter. It is a wonderful time to renew our bonds with our friends and family. Every year, I try to tap into the wonder, magic and lessons of the Megillah and carry its messages with me throughout the year.

Painting by the author, inspired by a photograph of Schlock Rock’s Lenny Solomon.

Yisroel Juskowitz is a critically acclaimed artist, musician, author, and speaker. He has performed to Jews across the country of all walks of life and ages, and is best known for his warm engaging style, and inspirational messages. He has produced two CDs of his own soulful music, has drawn commissioned artwork, and has two bestselling books on Jewish topics, which drew widespread critical praise and has been featured in countless articles and websites. Yisroel is also a licensed Physical Therapist and a Certified Life Coach, and focuses on people overcoming their obstacles and reaching their potential. 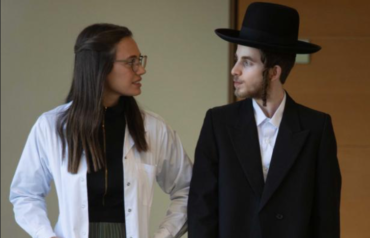 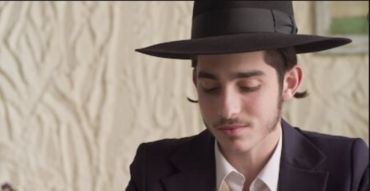