‘An American Pickle’ Has Heartwarming Moments, But Also Throws Religious Jews Under The Bus

I don’t think Seth Rogen is a self-hating Jew. That term gets thrown around far too often, so I don’t use it without good cause. I think Rogen, like many Jews today, has a complicated relationship to his Judaism. He’s said as much in recent interviews. He is a proud cultural Jew, thinks there are nice traditions around mourning, but ultimately finds the religion to be stupid.

These complex feelings are conveyed in his new movie “An American Pickle,” which he both stars in and co-produces. While Rogen gives us some feel-good Jewish moments and does have the protagonist somewhat come to terms with his Judaism by the end, the movie also presents religious Jews as relics from the past with despicable beliefs. 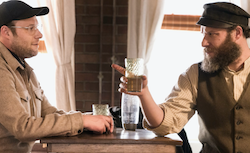 The premise of the film is that 100 years ago, a religious Jewish man named Herschel Greenbaum comes to the U.S. with his wife, Sarah, from the Old Country, and in the midst of attempting to achieve the American Dream, he accidentally falls into a vat of pickle brine. This preserves him until present day, allowing him to wake up in 2020 alive and well. He then reconnects with his only living relative – his great grandson, Ben, a secular Jewish hipster living in Brooklyn.

When I first heard about the premise of the movie and saw the depiction of Herschel, I groaned. As it is, many non-Orthodox Jews see religious Jews as artifacts from another era. An example of this mindset can be found in a 2015 article in The Forward where the author describes his experience getting a Jewish divorce. Although the author is living in modern times and working with a modern Orthodox Jewish court, as he walks toward the Beit Din of America office in midtown Manhattan, he expresses, “the ghosts of schleppers with handcarts laden with pelts and communist-leaning strikers marching down Seventh Avenue in the early 1930s whirled in my brain.” Why would the author suddenly be thinking about these random moments from the past? Because he’s about to “step back in time” and meet with some Torah observant Jews. (Not coincidentally, Herschel crafts his own pushcart for his pickle business.)

“An American Pickle” doesn’t just imply that Orthodox Jews belong in another time, it literally plucks one from the shtetl and throws him into our modern world, where he clearly doesn’t fit in. By the end of the movie, we learn just how much the world thinks he doesn’t fit in. More on that soon.

Growing up as a Conservative Jew, I remember seeing Orthodox Jews as monolithic Fiddler-On-The-Roof-people. I have distinct childhood memories of being embarrassed when religious Jews walked by on the street, thinking “I’m proud to be Jewish, but they’re too Jewish, they take our religion too far.”

Not only does Herschel look just like Tevye a la Fiddler, I have good reason to believe that many people see today’s Orthodox Jews as Fiddler-On-The-Roof-people like I did. In fact, a few years ago, we made a video called, “Hasidic Jews Watch ‘Fiddler on the Roof’ For the First Time,” which has over 200k views and is our fourth most popular video of all time. The video is in the genre of authentic people interacting with the caricature of their culture. Buzzfeed did many of these videos where actual Mexicans try and critique Taco Bell, actual Italians try and critique Olive Garden. I believe our video’s popularity is due to the public getting the concept we were going for: “You think Hasidic Jews and Fiddler on the Roof Jews are basically the same thing, and now the real versions get to comment on the fake versions.”

Our organization is dedicated to showing how Orthodox Jews and Judaism can elegantly fit into modern life; the reinforcement of the idea that our existence in today’s world is anachronistic is damaging. In Ben’s and Herschel’s early interactions, we see Ben’s dislike for the Jewish religion. He tells Herschel, “I understand why someone from your time would be religious, but I’m not.” Ben continues, “organized religion is very regressive.”

But even before Ben explicitly dismisses religious Judaism, there is the scene where Herschel leaves the hospital and takes a cab ride home with Ben, who has graciously offered to house him. On one hand, the viewer understands that any person who came from 100 years ago would be marveled by and overwhelmed with our complex, fast-paced world. On the other hand, this cab scene reminded me of a cab scene from another movie about Orthodox Jews, “Unorthodox,” where the protagonist’s Hasidic husband sees a smart phone for the first time. Like Herschel, he is baffled by technology.

While there are certainly Hasidim who are completely removed from all things technological, there are many who are extremely savvy with it (not to mention all the other groups of Orthodox Jews who interact with technology all the time). Indeed, there is a subtle implication that Herschel’s provincial interactions with the modern world are not only because he comes from the past. Even if he were from today, his “regressive” religion would keep him clueless to such things.

While the messaging that religious Jews don’t have a place in the modern world is troubling enough, the movie really takes a bad turn when it frames its Orthodox character as “abominable” based on his “despicable” religious views. Both of these words are used to describe Herschel and his religious views before the U.S. government is forced to deport him for being so offensive.

Herschel’s religious beliefs coming out are a major turning point in the movie. He and Ben get into a fight, and in order to sabotage his great-grandfather, Ben suggests that Herschel post all of his religious beliefs on Twitter. At that point, Herschel’s good fortune begins to end, as the world turns against him.

So what are Herschel’s religious beliefs as described in the movie?

These are clearly presented as religious beliefs. Besides the references to “Hashem,” one person in the movie discussing Herschel’s  comments says, “He’s saying some controversial things, but he’s religious, so I believe him.” A bit later in the movie, Herschel is scheduled to take part in a debate on “race, gender, and religion.”

I saw a review which claims that these are his “political” beliefs, but I don’t buy that for a second. I read about this scene before I saw the movie. Hollywood Reporter acknowledges that these are “religious beliefs” and calls them “retrograde.” When I expressed my dismay about this part of the movie on social media (prior to writing this review), one of our readers commented that if an Orthodox Jew from today said his beliefs, they would be the same because Orthodox beliefs are timeless.

Before we go on, I must address how we at Jew in the City approach these “timeless” Torah ideas.

While “An American Pickle” knocks the Jewish religion in several ways, it also shows that secular Ben is not fully happy in his life, and because I believe that Rogen has positive feelings about Judaism, he inserts some feel-good Jewish moments into the film. Ben is welcomed into a synagogue, which we see is a place that takes care of him and then he agrees to join a minyan where he says kaddish. We see him finally processing his grief around his parents’ deaths because of this. By the conclusion of the movie, Ben and Herschel make up, decide to go into business together, and Ben is OK with Herschel praying in front of him. So although the movie shows the world wanting to deport Herschel for his abhorrent beliefs, Ben is willing to keep him around if Herschel apologizes for them.

I believe Ben not throwing away his ancestor and instead asking him to apologize for the religious beliefs he can’t come to terms with is a pretty good parable for how Rogen feels about his Judaism. I just wish that instead of presenting the “retrograde” views as the Jewish religion, Rogen spent some time actually speaking to people who hold ancient Jewish views, values and traditions yet comfortably and unapologetically live in modern times. Maybe he would have discovered that there’s a way to remain authentic to the past while being fully integrated into our world.

When Did The Jewish Community Stop Owning Slaves?