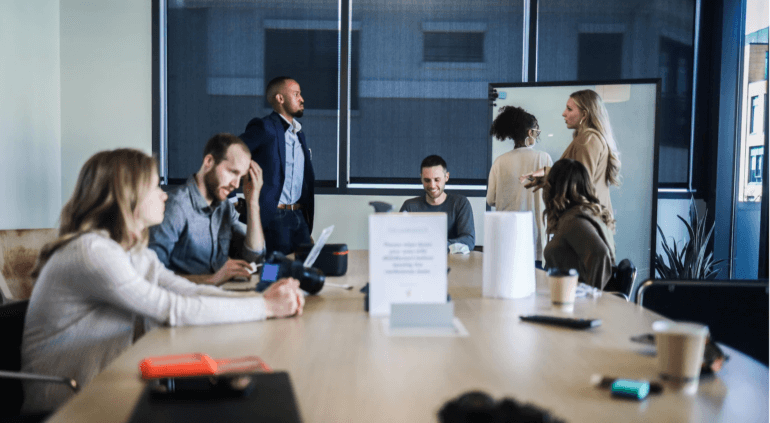 I recently attended an inclusion seminar that excluded Jews. I called it out in the middle of the program, in front of everyone. (Actually, I attended two recent seminars that excluded Jews and called it out both times.) At the second one, during a breakout session on how to be a responsible bystander when you hear someone harassing a person who is a minority, I was literally mocked by a person in the group for caring about problematic Jewish representation.

Which is why when a colleague sent me this Bloomberg article on, Growing Antisemitism In the US Is Sweeping Into The Workplace I was not surprised. But I was upset. Besides numerous troubling anecdotes, the studies were especially compelling:

A 2022 study published in the academic journal Socius surveying 11,356 workers of all faiths found that more than half of the Jewish respondents experienced discrimination at work – a higher percentage than any other religious group, besides Muslims. A smaller survey from November of 1,131 hiring managers and recruiters commissioned by ResumeBuilder.com had even starker findings: Nearly a quarter said they wanted fewer Jewish people in their industry and a similar share admitted they’re less likely to advance Jewish applicants. Among the top reasons cited for those discriminatory behaviors: Perceptions that Jewish people have too much power and wealth.

Additionally, the ADL just published a troubling new report – 85% of Americans hold at least one antisemitic trope, up from 61 percent in 2019.

After so much bitter division in our country, the right and the left have finally come together! To unite against the Jews. When have 85% of Americans agreed on anything? White Supremacists with tiki torches, famously shouted “Jews will not replace us,” a few years ago in Charlottesville. While they are the most extreme on the right, don’t believe that a more quiet version of this doesn’t exist beyond such marches.

On the left, having too much power and wealth means a person has taken too big of a slice. It is then a mitzvah to even things out. And the prevailing perception on the left is that Jews are not marginalized, because we have too much power and wealth. And we need to be cut down to size. Universities and places of work are beginning to do that work. Which harkens back to a time not that long ago in a place not too far away…

Which leads me to a play my husband and I recently saw on Broadway: Leopoldstadt. It’s based on the story of Tom Stoppard, a Jewish British playwright who grew up Christian, without any grandparents. Stoppard didn’t learn that he was a Jew or that all four of his grandparents perished in the Holocaust until he was in his 50’s and a cousin contacted him to reveal his family history.

As the audience, we got to know what the characters, set in 1899 Vienna, didn’t. They thought they had made it academically and professionally. They were intermarried, converted, assimilated. Many were powerful and wealthy.

But we, the audience, knew better. It was like watching a horror film, where you want to scream at the actress, “Don’t open the door!” You know what lurks behind it, but she doesn’t.

And here’s my question. What will future generations say about us, as we watch things grow worse, as we watch antisemitism sweep into every facet of life?

Israel was a big theme of Leopoldstadt. But, it was just an idea at that point. By now, seventy-five years later, it is home to half the world’s Jews.

And I think the other half is being called home, from the four corners of the earth. Like the prophets of old said would come to pass.

Will we hear the call or hope that thing get better and just wait it out?

Spoiler alert: we know how the story always ends.