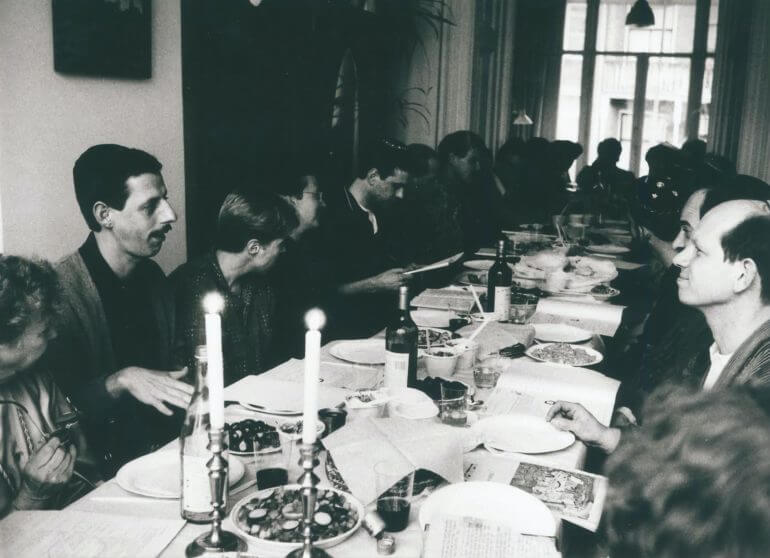 Jews are a refugee people, and as an ethnic minority we have never had a solid home base since our exile from our homeland in 70CE, due to Roman colonizers. As such, our ethnic food has become the food of the places that have housed us. While classic Ashkanazi foods like brisket, matzah ball soup and latkes are often associated with “Jewish ethnic foods,” there is a lot of divergence between the cultures based on where people have lived for extended periods of time that are just as Jewish.

So, in honor of Ethnic Food Month, here are some reader-submitted cuisines broken down by country, a brief overview of the history of its resident Jewish diaspora, and the ethnic foods they make for their families for Shabbos!

Is your culture on the list? What do you make for Shabbat? Let us know in the comments!

Persia: Otherwise known as modern day Iran, this area was host to one of the oldest diasporic Jewish communities, dating to biblical times (most recognizably in Megilas Esther). Jews who were exiled in ancient times formed their own communities — although some of these communities were isolated from each other, leading to the term “Persian Jews” being a matter of geography rather than having extended intercommunal relationships. The Jewish communities initially welcomed new leadership in the Muslims in the mid-600s because they had been heavily persecuted by the Sassanid dynasty. They did so because while Jews and other minority groups and religions were still considered dhimmis, or inferior subjects under the Islamic regime, Jewish leaders were no longer publicly executed. Legal disabilities, the order to wear clothes distinct from the Islamic population, being unable to bear arms and ride horses, and other stringencies felt like a good deal in comparison.

The food: Ghormef sabzi is known as the national dish of Iran. It’s an herb stew with kidney beans, onions, dried lime, and turmeric-seasoned meat. Ghormef sabzi is often served next to rice — in fact, Persian dishes feature a lot of rice! The two traditional ways of preparing long-grain rice are polo (parboiled and steamed) and tahdig (caramelized, and with some add-ins).

Iraq: The history of Jews in Iraq has been documented since the Babylonian exile, and the community is strongly associated with the building of the Second Temple and the development of the Talmud. Until the rise of the Islamic Caliphate, Babylonian Jews thrived and their community was home to educators and innovators. The community entered a state of decline in the wake of the Mongol invasion and Islamic religious discrimination laws in the Middle Ages. Persecution in the 19th century led members of the Baghdadi Jewish population to flee to India, beginning a secondary diaspora in southeast Asia. While the remaining Iraqi Jews played a significant role in the early days of Iraq’s fight for independence, nearly 75% of the Iraqi Jewish population emigrated to Israel in the span of two years via Operation Ezra and Nechemia from 1950-1952. Smaller Iraqi Jewish communities currently live in the US, Canada, UK, Ireland, Australia, and Singapore.

The food: Every Jewish community has its version of slow-cooked food for Shabbos day: t’beet is the Iraqi version, a rice-stuffed chicken dish that’s been cooked overnight until the chicken is falling off the bone. Other families will make hamin with lamb or beef, okra, and roasted eggs. Kubbah is ground meat with grain, and the Iraqi version often includes beets or pumpkin. A popular condiment for kubbah and other dishes is amba, a tangy mango sauce made with pickled green mangoes, vinegar, salt, turmeric, chili and fenugreek. Other popular dishes include ful medames (stewed fava beans), red rice and raisins, and crunchy rice. Non-dairy kataifi and baklawa make for a delicious Shabbos treat.

Morocco: It’s highly suspected that there has been a Jewish diaspora in Morocco since the destruction of the First Temple, with another wave after the destruction of the Second. After Christianity was adopted by the Roman state, the Church Councils of Carthage set into motion many persecutions against the local Jews. Many Jews moved to Fez after its establishment in the 800s and integrated well into city life, setting up a stable community and contributed greatly to the local economy. This golden period lasted about three hundred years, marred by a single pogrom, before the Muslim conquest. Even so, dhimmi status, while discriminatory, offered some semblance of safety in that they weren’t executed and although seen as second-class, could practice their religion. That protection ended with the advent of the Almohad dynasty (during which Maimonides lived), who enacted forced conversions. Dhimmi status was returned in the following Marinid dynasty, and the Jewish study of medicine and Kabbalah was well-received. Around this time, many Spanish Jews fled the Inquisition to Morocco. In modern times, Moroccan Jews suffered from antisemitic laws implemented by the French occupiers of Morocco, although Sultan Muhammed V did his best to protect them and keep Jews in positions of public status. Jews and Muslims mourned together when he eventually died, and many Jews also fled to other countries at this time — predominantly Israel up to the Six-Day War — then favoring Europe and North America.

The food: Salatim, which are basically a variety of salads, dips, spreads, and slaws that are served before the main course of a big meal, are a tradition of several SWANA cultures. Popular Moroccan salatim include marinated carrots, marinated beets, matbucha (slow-cooked tomatoes and roasted bell peppers seasoned with garlic and chili pepper), roasted eggplant, and tahini and hummus. Salatim are usually served alongside breads like pita. Moroccan cuisine is famous for its fish — slow-cooked salmon in rich red paprika and tomato sauce with cilantro and garlic. The main course then consists of chicken and potatoes, stuffed vegetables, and steamed rice. Cap it off with fruit, nuts, cookies and tea.

Hungary: Jews have resided in Hungary since the middle ages, potentially predating the Hungarian conquest of the Carpathian Basin in the mid 890s. While Jews were tolerated up to the 13th century — even working as officials to King Andrew II — religious tolerance steeply declined, ultimately mirroring the attitudes of the rest of Europe. More recently, antisemitic and anti-Jew policies spiked in the period between the World Wars, and Hungary ultimately sided with Nazi Germany and Fascist Italy. After the Holocaust, the Jewish population was severely depleted. Then, after the Hungarian Revolution of 1956 thousands more Jews fled — almost half of which emigrated to Israel, although diplomatic relations between Israel and Hungary were severed after the Six-Day War in 1967. Other refugees entered Canada, the US, Australia, Western Europe, and Latin America.

The food: Gulyas — Americanized as “goulash” — is stewed beef and is one of the symbols of Hungary. Csirkepaprikas is chicken with paprika, with countless variations that are tied together by the copious use of Hungary’s favorite spice. Csirkepaprikas is often served alongside nokedli (dumpling-like egg noodles), rice or millet. Side dishes include kaposztazs teszto (cabbage and noodles) and lecsó (a thick stewed vegetable dish similar to ratatouille). Megglyeves — soup of sour cherries, served cold — is popular in certain regions, and can be served as an appetizer, soup course, or even dessert. For those who prefer pastries, dobos torta is a decadent choice made with many layers of sponge cake filled with chocolate cream and topped with caramel.

Cuba: The Jewish Cuban population has existed for centuries — greatly hypothesized to have begun in 1492 with Columbus’s expedition to the Americas. His translator, Luis de Torres, is believed to have been a converso, or convert. Cuba was a haven for Jews in Latin countries fleeing persecution, including more Europeans leaving Spain and Portugal, as well as Portuguese-Brazil in the 17th century. American Jews also settled there in the late 19th century to set up businesses. The “Juban” population continued to grow with European Jews fleeing Nazi persecution, and grew large enough to support three distinct communities: Americans, European-Ashkenazim, and Sephardim. However, after the Cuban Revolution of 1958 and the installation of Fidel Castro, over 95% of Jubans emigrated to the US, particularly Miami, Florida.
The flow of Jews out of Cuba has been continuous since, predominantly to the US but also to Israel.

The food: Vaca frita, which translates to “fried cow,” is stewed, fried, and shredded beef. It’s a staple, and often topped with onions and served alongside beans and rice. A similar dish, ropa vieja, is only stewed. Arroz con pollo might be more familiar to English-speakers, as a chicken and rice dish. Congri is a uniquely Cuban take on black beans and rice. “Congri” means “with gray,” a color that is achieved by cooking the beans and rice together rather than separately. Other side dishes include yuca (cassava) and boniato (a sweet potato with flaky white skin and a pink-purple skin).

Mexico: Much like the Juban community, the Mexican Jewish community began to grow in 1519 with the arrival of conversos fleeing the Spanish Inquisition. A particularly large influx of Jews occurred during the Iberian Union (1580-1640) in which Spain and Portugal were jointly ruled. An inquisition in New Spain was more slowly established, but came to strength in 1571 and officially lasted until 1820 with an unknown number of victims. When Mexico gained independence, the inquisition officially stopped but Catholicism was established as the national religion. Remaining Jews continued practicing Judaism predominantly in private. The first recorded instance of Jewish worship was in 1861, in which resident Mexican Jews and visiting European Jews rented a hall for Rosh Hashana and Yom Kippur. While the open and self-identifying Jewish population in Mexico remained small, there are an estimated 20,000 Mexicans with crypto-Jewish ancestry.

The food: Barbacoa is a type of roast cooked in banana leaves for around eight hours, originally in a barbacoa oven but modernly in a slow cooker. The meat is seasoned and shredded for filling tacos, burritos, and other Mexican dishes. Plus, the slow-cooking makes it perfect for Shabbos! It’s often eaten with fresh tortillas. Mexican condiments include salsa roja (traditional red table sauce), and mole negro (made with dried black chilis, warm spices, and bittersweet chocolate).