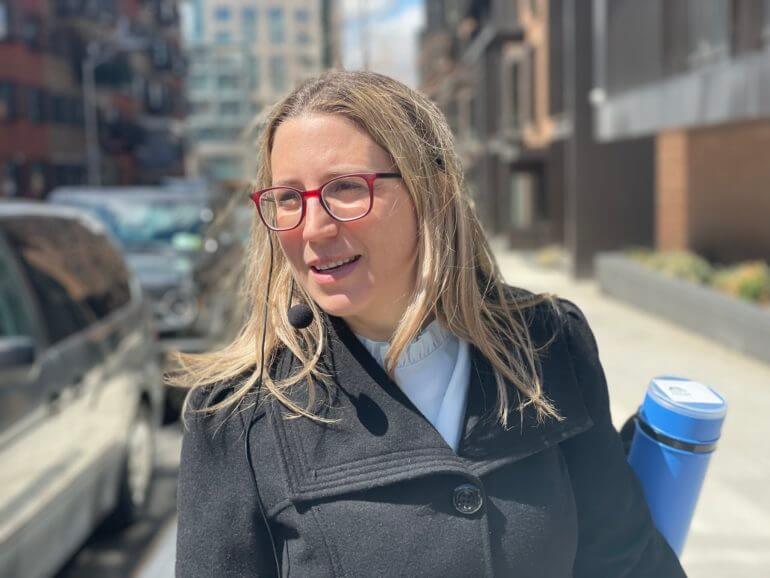 Many think they know about Orthodox Judaism thanks to TV shows like “Unorthodox” and “My Unorthodox Life,” a.k.a. media that shows off the community in a negative light without any sort of context that these are dysfunctional families. But where are the stories of inspiration? Where are honest, nuanced alternative narratives to balance that out? Enter Frieda Vizel.

Frieda grew up in a Satmar community in Kiryas Joel and initially left at the age of 25 as a single mother to her son, Seth. After spending a number of years trying to acclimate to a new non-Hasidic frum community, she left that community as well due to the lack of being welcomed by her new environment and the stigma of being ex-Hasidic. After reading her story, and feeling distraught from it, Jew in the City founder and executive director, Allison Josephs, wrote a post explaining that she feared that Jews were leaving observance completely after they left the ultra-Orthodox world because no one in other communities was welcoming them in. From this post, Makom, the JITC branch that helps disenfranchised charedi Jews find a positive place in Orthodoxy was born.

While Frieda didn’t wind up back in an orthodox lifestyle, she didn’t disown it either. Frieda may no longer be observant, but she has remained close to her community. She offers walking tours of Hasidic Williamsburg and Boro Park as a means of educating people on Hasidus. She also has a YouTube channel where she has videos on Hasidic food, holidays, kosher technology, and more.

“I thought I would live my whole life in the community, frankly,” she says. “I’m still surprised by my journey.” Seeking closure after her departure, she began studying parts of the Hasidic culture that fascinated her or otherwise felt like loose ends in her understanding. This included the history of women shaving their heads, which had bothered her significantly and was a custom that she herself had practiced for five years. By doing so, she was able to distance herself a bit from the emotional side of the practice. In addition to personal research, while in grad school, Frieda was asked to give a tour in Williamsburg: from there, she ended up becoming a regular in the neighborhood and continues to give tours professionally since 2013.

That and more have been part of her personal journey and have allowed her to be connected to her roots despite not being a part of the community directly. She documents various elements of the Hasidic community’s lifestyle (such as music, toys, street signs and art) on her blog. She feels like the positives and joys of these communities have been ignored by academia, sociology, and journalism — she strives to make sure that the nuances are seen and heard.

At the same time, she speaks candidly about her own journey away from the Hasidic — and ultimately, Orthodox Jewish — lifestyle, which was painful and difficult. “While in the community, I felt very voiceless,” she confesses. The only people who I felt were really speaking for [the community] were either people who left and were very angry, or people who were the designated authorities — almost exclusively male — who got to tell what felt like a very PR spin. It was very important to me to share this very unique world from an everyday woman’s perspective.”

Early on, that wasn’t a voice that was immediately accepted. Non-hasidic Orthodox Jews simultaneously viewed the community that Frieda had left behind with condescension for its extremism, but  were distrustful of her for having left the community in the first place. Upon trying to transfer to a yeshivish community (which she had considered more modern based on the standards of her youth), she was shocked that she was not accepted — and that people were very uncomfortable with her criticism of the Hasidic community, which they themselves judged frequently. This not only occurred among neighbors, but at the institutional level. Frieda could not find a school for her son due to being judged as the child of a divorced woman. They told her that as a single-mother-family who had left a Hasidic background that “they didn’t know where [she’d] go next” in her path of self-discovery and therefore would not accept her son.

Years have passed since then, and Frieda and Seth have continued their journey — which includes Seth being enrolled in a completely different school system outside of the Jewish world. Frieda admits to carrying the hurt and devastation of Seth’s rejection to this day — and hurts for others who tell her that schools have turned their noses up at other children. However, she also hears the perspectives of these educational institutions: they seek to self-preserve and maintain a certain culture, in similar ways that secular private schools do.

While those priorities do not excuse sinas chinam, she doesn’t believe that the Orthodox Jewish community is an oppressive monolith. “These are faults,” she says, “and all societies have faults.” Her nuanced criticism goes further: “I am mystified when I see outsiders treat the frum community’s flaws as if they’re some anomaly, as if their world is perfect.”

Frieda has heard many people severely criticize the Hasidic education system, to the point of stating that children need to be rescued from it. Frieda points out that faults exist in every school system, and points out the flaws in public schools’ use of the Zoom system during the pandemic. “People are willing to look at other societies and criticize them without wanting to see it within balance — that there are things that work, and there are things that don’t work. These aren’t inhuman demons, but are part of a society that has its benefits and its shortcomings. It should be acceptable to speak to the shortcomings, but also see them in context.”

She therefore has criticisms of people who have left the Orthodox Jewish community and now publicize a horrifying view for the sake of sensationalism. Despite identifying with the experience of leaving, Frieda approaches such stories from the perspective of media criticism: she asks if the story challenges perceptions, presents something fresh and new, or is something that is simply taking advantage of people’s hunger for a certain kind of story.  Frieda has not watched My Unorthodox Life, and made that decision upon seeing the trailer. In that trailer, Julia Haart said something to the effect of “miniskirts were the ultimate freedom.” Frieda thought to herself, as a feminist, that Julia was essentially objectifying herself with that statement. Furthermore, Julia was taking the concept of freedom — which is not only valuable to Frieda, but a very broad and powerful concept — and making it all about the male gaze and commodifying herself.

Frieda emphasizes that she is not criticizing My Unorthodox Life as a defense of Orthodoxy, rather she is criticizing it as a piece of media that was being opportunistic and making no attempt to challenge the viewer. The effect of that was ultimately an increase in the dehumanization of Judaism.

From a professional angle, most of the clients that Frieda shows around Williamsburg on her tours know Satmar Hasidus best from what they were exposed to on My Unorthodox Life. People truly see Haart’s story as fact, and view Orthodox Judaism as an oppressive, cold, and harsh institution.

“I have this extreme urge to put something out there that is neither the black nor the white, but allows for a nuanced understanding of people who are different from what most [of my customers] expect but are still very human.”