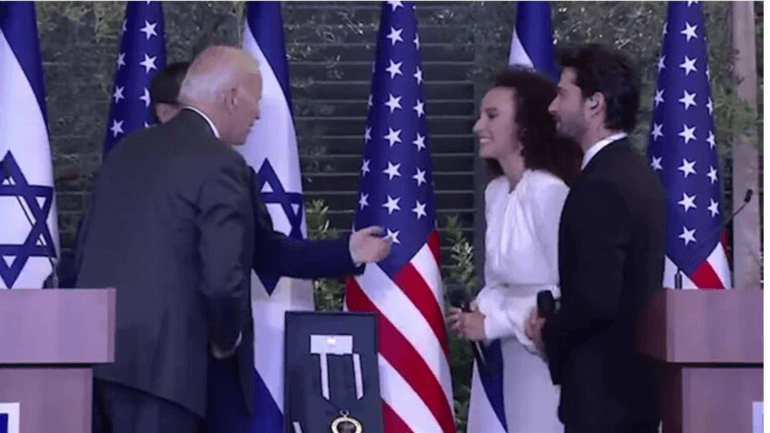 Why Did Israeli Singer Yuval Dayan Not Shake President Biden’s Hand But Sing In Front of Him?

For days, President Biden shaking hands or not shaking hands for his Middle East trip was in the news, because apparently he didn’t want to shake the hand of the crown prince of Saudi Arabia, but also didn’t want to snub him too much. So his team announced that due to rising Covid cases there’d be no handshakes. But then he got to Israel and was shaking everyone’s hand. Or almost everyone. The handshake that didn’t happen was an unexpected one.

Israeli singer and recent baalas teshuva (returnee to observance), Yuval Dayan, sang a beautiful duet to welcome the president to Israel, but when the song was finished and Biden came over to say “hi,” Yuval held her hands together and did a small bow, explaining she doesn’t touch men for religious reasons. Now, the mitzvah of shomer negiah (not touching those of the opposite sex who are not in your nuclear family) is not cut and dry. Some people say in a business setting or in order to not to embarrass a person, you can shake a hand. Other authorities say you can’t.

Since Yuval didn’t shake Biden’s hand, the Twitterverse – and many of these people, mind you, are ones who believe that touch should always be consensual –  are accusing Yuval of “ghosting” Biden’s handshake. Others are saying she’s a hypocrite. They reason that the prohibition of singing in front of a man – kol isha – is more important than taking a strict approach on shomer negiah.

To all those people, I say “mind your own darn business.” These are probably the same people who pontificated when Ivanka Trump rode in a car on Shabbos (they excused her of being too lenient), or wagged their fingers when Beatie Deutsch said she wouldn’t race on Shabbos (they accused her of being too stringent). None of us know what is going on in anyone’s head or what conversations they are having with their rabbi. Our sages tell us, “Don’t judge a man until you have stood in his place.”

Also – Yuval is a baalas teshuva. What that means is that she is on a journey of growth. (Even people born observant can be on similar journeys.) Do you know what I did when I was becoming religious? I did the easiest things first because they were easy! So what did I give up first on Shabbos? Homework!

It would be Friday night, and I be watching TV as a teenager. My mother would tell me to do my homework, and I replied, “Homework, Mother, on the holy Sabbath? I don’t do that any more!” To which she’d ask me why I was still watching television, to which I replied that television was still too hard for me to part with on Shabbos, but I had disavowed homework from that point on.

Then on Saturday afternoons, my mom would find me yapping on the phone. “Vacuum the rugs,” she’d tell me. And with horror, I’d ask,”On the Lord’s day of rest you want me to vacuum? I don’t do that any more on Shabbos!” But then she’d ask why I was still talking on the phone, and I’d explain that quitting the phone on Shabbos was still too hard for me.

And while I was being cute then and cute now, this is actually what I did, and I did it because of Jewish wisdom: mitzvah goreres mitzvah. Our sages teach that one mitzvah leads to the next. And that means that if you start with the easiest mitzvos first, it will be more doable to get to the more difficult ones later. Because you’re already on your way. Yuval Dayan is a professional singer. Giving up singing to mixed crowds is probably exceedingly difficult for her. Maybe she’s starting with the stuff that she can manage for now. Maybe she is being stringent where she can be stringent because she is conflicted that she has not been able to broach her biggest challenges yet.

During the years that Mayim Bialik and I learned regularly, taking on the easiest mitzvos first is exactly what I advised her to do. She was not ready or able to take on every observance at once. It was a lot to do in an industry that makes no space for this sort of thing. And so I advised her to start with what she was able to do, because every mitzvah counts, and when you get started on the journey, it’s a lot easier to continue on it.

So let’s applaud Yuval for not only being on this journey but being willing to stick to her convictions, even in a very public and pressured moment.

We see a lot of judgment in the world today and not enough conviction. Let’s take the time to call that out.

No, Anne Frank Did Not Have White Privilege: Here's How To Combat Lies Like These