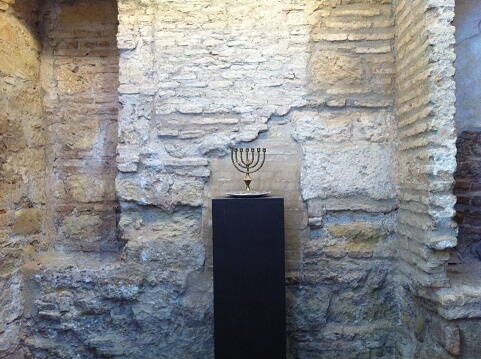 Do Sephardic Jews have their own language like Yiddish?

They sure do. It’s commonly called Ladino. (It’s also known by a few other names, but we’ll come to that.)

Ladino started among Jews who lived in the Iberian Peninsula in the 15th century. Originally a dialect of Old Spanish, it was influenced by Portuguese, Hebrew, Aramaic and other local languages. Just as speakers of Yiddish and German could once understand one another, the same was originally true for speakers of Ladino and Spanish. The two languages really diverged following the expulsion of the Jews from Spain in 1492, scattering them across Europe and North Africa, and into the Ottoman Empire. (This is actually where the term Sefardi comes from – the Jews who were expelled from Sefarad, i.e., Spain.) The Jews in the Ottoman Empire spoke a number of different local dialects they brought with them, and these got mixed together. From there, Ladino evolved into a language distinct from its Spanish roots. Other linguistic influences on Ladino include Turkish, Arabic, French and, to a smaller degree, Italian.

An example of the ways in which Ladino and Spanish evolved separately would be that Ladino retained an initial F on some words that morphed into an H in Spanish. Accordingly, the verb “to speak” is “hablar” in Spanish and “fablar” in Ladino. Additionally, Ladino reflected the religious sensibilities of its speakers. For example, Sunday in Spanish is Domingo – “the Lord’s (day).” Of course, to Jews, Saturday is the Sabbath, with the result that the Ladino word for Sunday is “Ahad” (first), corresponding to the Hebrew “Yom Rishon.”

Ladino thrived even into the 20th century but the language was threatened by the end of the Ottoman Empire in 1922, which dismantled many of the communities that spoke it. While the Holocaust didn’t affect Sefardic communities the same way it did Ashkenazic communities, the global antisemitism of the 1930s and 40s certainly didn’t help Ladino any, with its speakers killed, dispersed or assimilated by other cultures. Persecution of Moroccan communities in the late 1950s drove Ladino speakers towards Israel, Europe and the Americas, where they adopted the languages of their new homes. By the end of the 20th century, Ladino was no longer being taught. While estimates for current speakers vary, it would seem that Ladino has no more than 50,000-100,000 speakers globally. Most of these live in Israel; about 8,000 of them live in Turkey, with a handful in Greece and in Bosnia and Herzegovina.

As to the name of the language, most speakers call it Spanyol and its “official” name in Modern Hebrew is Spanyolit, though most people there now call it Ladino. It is also known as Judezmo, Judió, Jidió, Hakitia, Spaniolish and a few other things. Academics generally refer to Ladino as “Judeo-Spanish” or “Judaeo-Spanish,” JS for short. Residents of Turkey, Greece, Israel, Egypt, Yugoslavia, Bulgaria, Romania and Rhodes spoke what is now called eastern Judeo-Spanish; those in North Africa and Morocco spoke western Judeo-Spanish. The name Ladino comes from “Latin,” because it is a Romance language (meaning descended from Latin, the language of Rome).

Native speakers actually differentiate between Spanyol and Ladino, using the latter to refer specifically to religious texts written in a word-for-word translation, which is different from the conversational version of the language. In this technical sense, Ladino is basically Spanish words using Hebrew syntax.

It should be noted that there is another, unrelated language, spoken in Northern Italy, also commonly referred to as Ladino.

The most well-known work written in Ladino is the midrashic collection Meam Loez, whose many volumes were published from 1730-1777. Started by Rabbi Yaakov Culi, the work was continued by others after his death. The title comes from Psalms 114:1, “When Israel went forth out of Egypt, the house of Jacob from a people of strange language…,” referring to the fact that it was written for Ladino speakers unable to access traditional sources in the original Hebrew. (Meam Loez is widely available in English as The Torah Anthology by Rabbi Aryeh Kaplan.)

While spoken Ladino resembled Spanish, it was originally written in what we call “Rashi” script, a cursive form of Hebrew, with diacritics added to allow for phonemes not native to Hebrew. Nowadays, Ladino is usually written using the Latin alphabet, though the spoken version remains unaffected by this change.

In the 21st century, Ladino has enjoyed something of a revival, with descendants of its original speakers becoming interested in learning it and a handful of American universities even offering courses in Ladino. Ladino has been recognized as a minority language in Bosnia and Herzegovina, Israel, France and Turkey. In 2017, the Spanish Royal Academy announced the creation of the National Ladino Academy for the preservation of the language.

So Ladino isn’t exactly what one would consider a “healthy” language but it’s on antibiotics and its prognosis is good. Hebrew was brought back from the brink and I suspect that Ladino might likewise be saved from extinction.