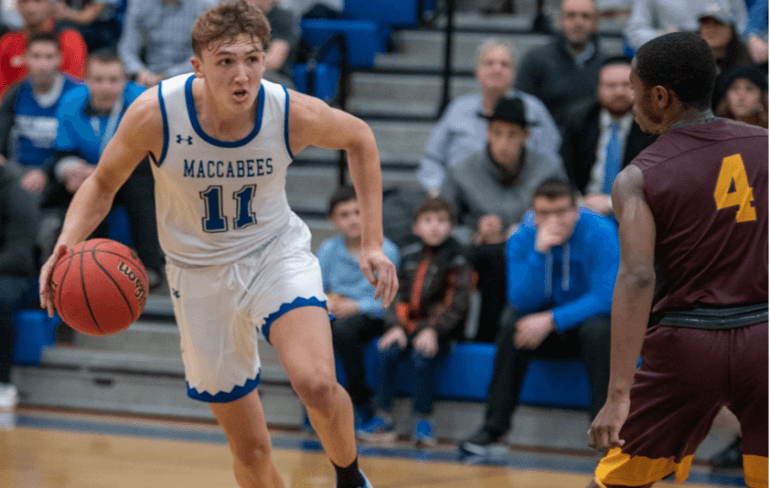 The Orthodox college basketball superstar, Ryan Turell, is the top scorer in the country and makes a Kiddush Hashem every time he steps onto the court. Yeshiva University’s basketball team, the Maccabees, is ranked sixth in the country due to Ryan Turell’s superb skills. In a recent interview with The New York Times he explained that turned down division I schools because being a “Jewish hero” is most important to him.

Turell averages 28.1 points per game, which is the highest average across all three divisions of the National Collegiate Athletic Association. This season alone, Turell has scored over 30 points in six games, and he scored 51 points in another. Additionally, Turell broke YU’s previous basketball point record with 1,906 points scored while playing for the Maccabees.  Turrell does not mind being the top scorer, as long as it helps the Maccabees succeed and win the championship.

Turell grew up in Los Angeles and he played basketball at Valley Torah and for Earl Watson Elite, a top AAU team. He had offers to play in Division I but ultimately decided it would be best to play for Yeshiva University.

Turell says to The New York Times, “I went to Jewish schools my whole life, I grew up religious, I keep kosher. “I was like, ‘What are we doing here? I want to go to Yeshiva.’ My parents were kind of shocked because my dream was to play Division I. But I told them, ‘I want to be a Jewish hero.’”

Turell has become a celebrity on campus and is often approached by other students who greet and congratulate him. Elliot Steinmetz, the head coach, says he receives emails from people around the world who express their support for Turell and the Maccabee team. Steinmetz received an email from a fan in Australia who wanted to buy a YU jersey

Turell recently started playing with a kippah on his head. He didn’t wear one in AAU games and when he played in LA pickup games with college and NBA players. Turell regrets not wearing one in the past, but now he is more conformable with the attention it brings and how it signifies his Jewish pride.

Along with the positive attention, he has received some anti-Semitic remarks on the court such as “Jew boy.” Instead of letting the comments bring him down, they fuel his desire to win.  In a recent game filled with anti-Semitic slurs, the Maccabee’s won with dignity, choosing not to respond to the hateful remarks.  Everyone was proud of them including YU President Ari Berman who says, “They aren’t just playing for a university. They are playing for a people.”

Why is No One Talking About the Human Rights Issues at the Olympics?