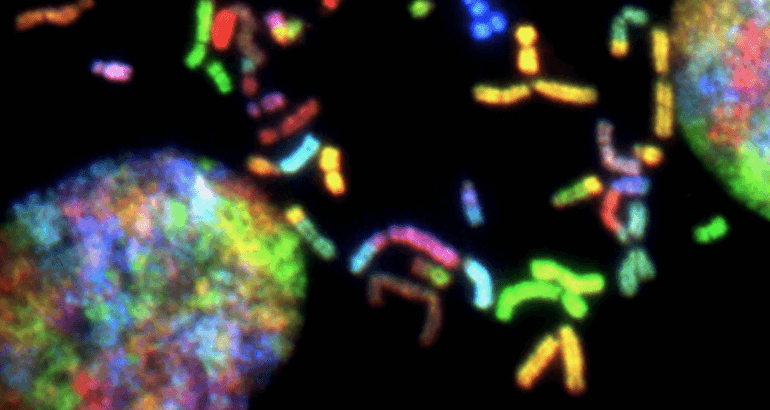 This Woman Was Searching For Lost Relatives, Instead She Found Cancer

About a decade ago, when chromosomal testing first came out, Lara Diamond, a Baltimore-based genealogist decided to do some DNA tests. She was in search of long lost relatives, but her query eventually produced something even more valuable than reconnecting with family – her own life being saved.

Diamond explains, “There were earlier tests that weren’t as useful for Jewish genealogy.” She did her first test and found relatives that had survived the Holocaust. Inspired by the marvel of modern day science, she went on to try to find more relatives. While she was only doing the testing for genealogical purposes, one of the companies she used sent some health information along with the background check. She didn’t think much of it. Then the results came in. “That’s how I found out I had a BRCA2 mutation, which was a complete and total shock.” There were know known breast cancer cases in her family.

Diamond was happy to find more relatives, but was “trying to internalize what this medical result meant for myself and my family.” Her response was to call her doctor and rabbi. Then she went to a genetic counselor who confirmed the mutation. The test she took only tested for three mutations which are prevalent in the Ashkenazic Jewish community. “These genealogic tests look at a few specific mutations. If you’re doing this [testing] for medical information, you need to do it through JScreen or a medical based screening.” Otherwise false negatives can occur, and there’s no one there to walk you through the meaning of the results.

The process of finding out for sure took several weeks. Diamond then had to get a mammogram and an MRI, which came up with areas of suspicion. The MRIs aren’t recommend for the general public because “They pick up lots of things that are really nothing in the end.” But Diamond had a biopsy due to her BRCA status. One of the suspicious spots actually turned out to be cancer. She was 37 years old at the time.

She met with a secular Jewish surgeon who asked her if she was religious. Diamond is an Orthodox Jew. The surgeon told her, “well I’m not, but your story almost makes me want to be religious.” Based on the type and location of the cancer, it would have been 3-5 years until she had symptoms. “He told me that if I hadn’t taken the test, my story would be a lot different.”

“Yes, it’s difficult information to deal with, but it’s important information to know.” Diamond believes that it was a miracle that the test happened for her at the exact right moment. If she had taken it sooner, the tumor would have been too small to detect. If she had taken it later, it would have already been more aggressive than the stage 1A hers was discovered in. “It really was just the exact right time to take this test and get those results.”

Diamond spoke with rabbis throughout the process, sometimes they advised her to make her own decision, but other times they helped her make the best decision in favor of saving her life. She had a double mastectomy to prevent the possibility of the cancer recurring. Because she doesn’t have children yet, Diamond decided to hold off on a hysterectomy for the time being. While her doctors wanted her to take the most aggressive medical approach, Diamond was comforted that the rabbis she consults with, who are medical experts in their own right, look at her case holistically. It meant that she didn’t have to make such weighty decisions all on her own. Yes, saving a life is of utmost importance in Judaism, but quality of life matters too. Diamond continues to keep up with testing in order to screen herself for other issues that the BRCA mutation can cause.

Upon further genetic research, Diamond found that it would have been hard to trace the cancer gene matrilineally. “It comes through a mostly male line in my family. When people think of BRCA, they think of breast and ovarian cancer. They don’t think there’s other things associated with it as well.” Pancreatic cancer is a less known sign of the BRCA gene.

As an Orthodox Jew, Diamond knows that “the community is really there to support you when you’re going through hard times.” From the people who asked to bring food to other help, she was touched by the outreach. On the other hand, there is a stigma about cancer that people seem not to be able to talk about. “I think it is dangerous, because 1 in 40 Ashkenazi Jews have a BRCA mutation.” Therefore, she says, people don’t talk about it. That’s why she is so supportive of organizations like JScreen. “It is literally life-saving.”

Diamond now counsels other Jews on a regular basis about cancer but is concerned at the level of secrecy that remains, including several people who haven’t told close family members. “It’s the way that it is, but I don’t think it’s the way that it should be.” Her wish is to be a part of this change and now works with Sharsheret as a mentor. “They will actually match people up with somebody who has a situation relatively close to what they are going through, so I tend to get people who have a similar story to mine.” Diamond is paying it forward directly. “I had somebody that I called when I first got diagnosed, so now I’m doing the same [for others].”

This interview was done in partnership with JScreen. To get $50 off CancerGEN, ReproGEN, or combo package, use coupon code JEWINTHECITY50.