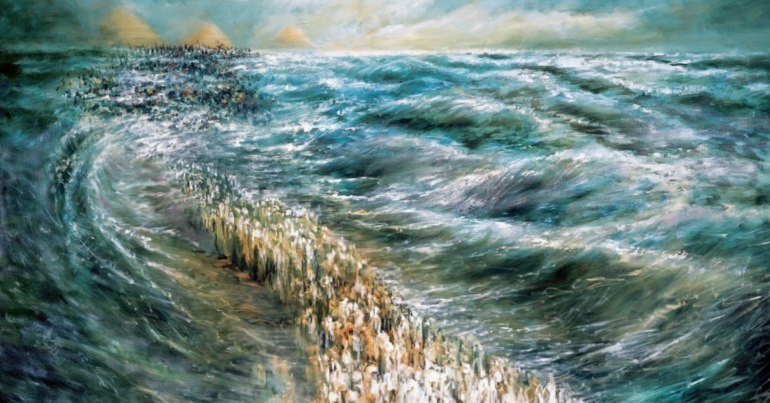 Several times each day, we describe God in our prayers as a shome’a tefila, One who hears prayers. “Hear our voice, Hashem, our God…accept our prayers with compassion…don’t turn us away empty…Blessed are You, Hashem, Who hears prayer.”

This blessing of the Amidah prayer paints a nice, neat picture of the relationship between our prayers and God’s response: we pray for things, and (we hope) He responds. The story we retold at the seder just a few nights ago offers a prime example: “We cried out to God… and God heard our voice… and God took us out of Egypt…” (Devarim 26:7-8). In this account of the redemption, that straightforward sequence of events – people pray; God hears; God does – played a pivotal role in turning the tide from slavery to freedom.

Of course, we know things aren’t always quite that neat – at least, we can’t always perceive it. Sometimes we cry out to God and He doesn’t respond, or doesn’t seem to respond, or perhaps His response is “no.” And on the flip side, the side we perhaps think about less often, there is the possibility that we don’t cry out – or that there is something incomplete on our side – yet God responds to what we didn’t say, or didn’t say well or fully.

Those verses we recited at the seder might even, if we look more closely, tell a more complex story of the relationship between what we might ask of God and what He might give us.

The Haggadah relates that account in Devarim to the parallel passage from Shemot, where the story first unfolds. At the end of Shemot chapter 2, Moshe has settled in Midian and the camera jumps briefly back to Egypt to share that the king died “and the children of Israel groaned from the work and they cried out and their cries rose up to God from the work. And God heard their cries, and God remembered His covenant… And God saw the children of Israel, and God knew.” On the face of it, these verses do seem to present a straightforward (though oddly wordy) picture of the turning point towards redemption: the people were suffering, so they cried out, so God listened – and in fact, the camera immediately jumps back to Moshe and his vision at the burning bush, where God tells him the time has come to redeem His people.

Rabbi Avraham Ibn Ezra is one commentator who reads the verses in Shemot that way. He notes that the prophet Yechezkel (chapter 20) tells us the children of Israel had sinned in Egypt, falling into worship of the Egyptian gods; according to Ibn Ezra, their cries at the end of Shemot 2 indicate repentance from those sins. In his view, then, the people made themselves worthy of redemption – so God responded in kind. Nice and neat.

Ramban, however, throws a slight wrench into that picture by noting that Yechezkel tells us the people sinned – not that they repented. In fact, Ramban argues, they were not worthy of redemption. Why, then, did God take them out? “Because of the cries, He accepted their prayer, in His mercy.” They may not have deserved it, but they were suffering and in the depths of despair after their oppressor’s death – when, Ramban suggests, they might have hoped for relief but instead saw a ruler even worse than the previous one take his place. Their pain and hopelessness aroused God’s compassion, and He stepped in.

Between Ibn Ezra and Ramban, then, we have two models for human prayer and divine response: The easiest to understand is that He would respond when it’s deserved – but Ramban’s reading of the text reminds us of a less straightforward ingredient in the relationship between humans and God: compassion, or mercy. Even if we don’t deserve it, hope is never lost.

A third commentator’s reading of Shemot Chapter 2 takes things even a step further. While Ibn Ezra and Ramban at least agree that the Israelites prayed, the Ohr Hachaim calls our attention to a seemingly superfluous phrase in the text that may indicate the opposite. “The children of Israel cried out from the work” – not to God, says the Ohr Hachaim, but from the work. They were in pain, and so they instinctively made sounds expressing their pain, like the primal cry of one who’s been hurt – sounds that weren’t consciously directed towards God, but that “rose up to God from the work” nonetheless. (We might then suggest that the claim in Devarim 26:7, “we cried out to God,” offers a hindsight view: God responded to those visceral cries of pain, so it is as if they had been directed to Him from the start.)

It is not hard to imagine things as Ohr Hachaim suggests. This was a people who had been enslaved for centuries, whose collective memory only just barely held on to the knowledge that God had promised their ancestors something better, who (according to midrashic traditions) maintained just a few remnants of their cultural heritage. Is it reasonable to think they had an active relationship with the God of their ancestors, that they would even think to cry out to Him over their suffering? Is it reasonable to think, after so long, that they would even know how? Perhaps – and that is the picture offered by Ibn Ezra and Ramban. But perhaps not. Perhaps they were simply too immersed in their physical suffering – yet God, in His mercy, heard them anyway.

It is also not hard to imagine, I think, times in our own lives when the immediacy of our pain, on a large or small scale, makes it impossible to form words or even clear thoughts, when directing coherent prayers to God is simply beyond our capabilities. Ohr Hachaim’s read of the text offers a deeply comforting model of the relationship between human and divine, reminding us that God can hear us even when we’re unable to talk to Him.

In a fourth poignant reading, the Netziv argues that the people did pray – but not fully. In his view, the phrase “from the work” tells us God listened even to the rough, unpolished prayers of a people who knew almost nothing but hard physical labor. He does, however, see indications of gaps in what they prayed for. Both passages cited in the Haggadah (Shemot 2 and Devarim 26) note that God didn’t only hear but also “saw” (and, in the case of Shemot, “knew”); apparently, there was more to their suffering, more for Him to attend to, than they actually prayed about. “And God heard our voice, and He saw our affliction and our toil and our oppression” (Devarim 26:7). What are these three things that He saw, rather than heard? The things that, if He didn’t hear them, must not have been said?

“And He saw our affliction” – this is the separation of derech eretz (“the way of the land,” a reference to marital intimacy)…

“And our oppression” – This is the pressure, like that which is said, “And I have also seen the pressure which the Egyptians pressure them” (Shemot 3:9).

According to the Netziv, each of the above three elements of Israelite suffering in Egypt represents something the people didn’t pray about – but that God attended to anyway. In his comment on Shemot 2:25, he writes:

“And G-d saw Bnei Yisrael” – He also saw that which He didn’t hear:

Sometimes, we’re embarrassed; we might think something is too personal, or too unimportant, to bring up. We might question whether we should really be upset about something. Logically, why cry out over a decree that, while horrifying at the time, had been obsolete for 80 years already? In the Netziv’s reading, God responds that in fact, it’s all important – and even if we don’t see it, He does. If we don’t think our pain is justified, worth praying over – He responds to what we didn’t say. Yes, it is important. All of it.

And if we’re too immersed in our own pain to see it for what it is, to realize anything could have been different – He sees that too. He doesn’t hear it, because we don’t know to say it. But He sees it; “and God knew” (Shemot 2:25) – He knows our potential, even if we don’t, and can step in to help us get there, even if we are like the child who doesn’t know to ask.

As we celebrate our people’s redemption from slavery this week, we might also celebrate the multiple paths towards redemption on every level, including the personal redemption that comes from building a two-way relationship with Him – even if we’re not perfect.

And just as we might sometimes be justifiably frustrated when it seems He doesn’t hear or answer even though we’ve prayed, we might also think about whether it’s possible that we haven’t prayed, even though He’s answered.