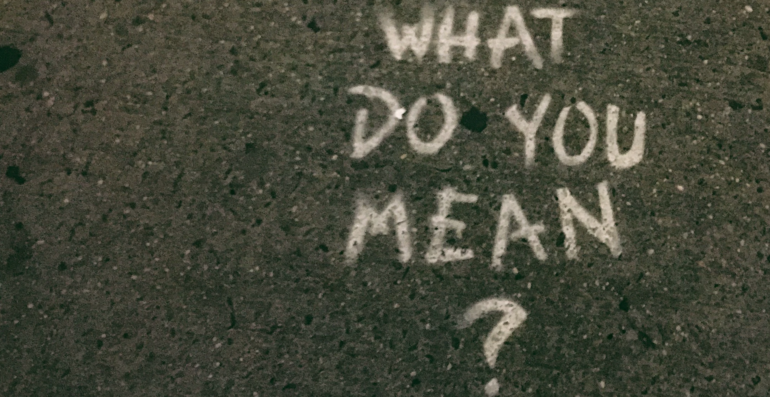 As a child, my questions were silenced. I was told to just believe and not question. As I have gotten older, I have met Orthodox Jews who encourage questioning. But I’m still not sure it’s ok. What sources give us permission to question?

My family has a very dear friend, a convert to Judaism, who used to be a Christian missionary. I’m talking the legit, go-down-to-Mexico-and-build-churches kind of missionary. When she was in Bible college, a course discussed converting Jews, largely through verses in Isaiah. My friend, being a sincere student, didn’t just take those verses at face value. Rather, she studied their entire chapters, the better to understand them. The problem was that she discovered, in context, those verses didn’t say anything at all like she was being told to represent them. She asked her professor about this, who responded, “You need more faith!”

She didn’t find this response satisfactory and ultimately found her way to Judaism, where asking questions was not only tolerated, but actively encouraged.

In his book Everyone’s Entitled to My Opinion, my old friend and mentor Rabbi Dovid Orlofsky tells two incredibly similar tales, one of which involves former Methodist minister Rabbi Dr. Asher Wade. According to Rabbi Dr. Wade, “No Rabbi ever cried ‘Shir Lamaalos!’ (an exclamation) when I came to him with a question. They always say, Sit down! Ask questions!”

I don’t relate these stories in order to make any broad-strokes observations about other religions. There are 41,000 Christian denominations in the world* and I’m sure they’re very different from one another. Anecdotally, however, people in religious traditions where they feel they can’t ask questions have found Judaism to be a place where they can.

So where do we get permission to ask questions? From the Torah.

Consider Deuteronomy 6:4 – the Shema. The Torah tells us, “Listen, Israel: Hashem is our God; Hashem is One.” But “Shema” (listen) doesn’t mean to be a passive recipient. While most commentators focus on the unity of God, the Sforno explains the meaning of “Shema”: it means “investigate in order to understand this.”

We see the same lesson from Exodus 24:7, in which the Jews responded to receiving the Torah by exclaiming “naaseh v’nishmah.” Typically rendered in English as “we will do and we will hear,” a better translation would be “we will do and we will understand.” In other words, the Jews agreed to perform the mitzvos because God told them to but they also expressed their intention to ask questions that will lead to a better understanding of the Torah. Aside from the fact that God recorded this response in the Torah, we see that He approved of it from the story in Talmud Shabbos 88a: when the Jews exclaimed “naaseh v’nishmah,” 600,000 angels down came and tied two crowns to every member of the Jewish people, one corresponding to “we will do” and one corresponding to “we will understand.” So we see that God doesn’t just want our blind obedience, He wants us to understand what we’re doing and why.

The prototypical model of our permission – or perhaps our obligation – to ask questions comes from the questions of the four sons on Pesach, which are found in the Torah:

“It shall be when your son asks you in the future saying, ‘What is this?’ that you shall say to him, ‘With a mighty hand Hashem brought us out of Egypt, from the land of slavery’” (Exodus13:14);

“In the future, when your son asks you, ‘What is the meaning of the testimonies, statutes and laws that Hashem our God has commanded you?’” (Deuteronomy 6:20).

You’ll note that that’s only three questions. Remember that the fourth son is the one who doesn’t know how to ask. Regarding him, the Torah tells us, “You shall speak to your son on that day saying, ‘It is because of that which Hashem did for me when I came out of Egypt’” (Exodus 13:8). If a child doesn’t know how to ask, we have an obligation to teach him to ask!

And these aren’t the only questions found in the Torah. We ask how we’ll eat during the Sabbatical year, when we don’t harvest our crops (Leviticus 25:20). We ask about the times gone by to see if an event is unprecedented (Deuteronomy 4:32). We ask our fathers and our elders to explain the ways of the world to us (Deuteronomy 32:7; Rashi quotes Sifre that father here means the prophets, who we see are called fathers in II Kings 2:12, while elders means the Sages, which is pretty self-evident). God wants us to ask!

But if you really want to talk about asking questions, let’s talk about the Talmud.

The Talmud isn’t a code of law per se. It’s not a linear list of rules to observe. It’s a multi-generational discussion, with questions flying fast and furious. And it’s not just the Sages of the Talmud asking one another; everyone is asking! Potential converts ask some pretty outrageous questions of Hillel and Shammai. A Roman noblewoman asks of Rabbi Yehuda son of Rabbi Ilai. An early Christian sectarian asked Rabbi Chanina about Balaam’s lifespan. The scholars of Athens asked trick questions of Rabbi Yehoshua ben Chananya. There are many more such examples, all of which are recorded for posterity.

Or consider this contrast between Noach and Avraham: When God told Noach to build an ark because He was going to flood the world, we are told that “Noach did all that God had commanded him” (Genesis 6:22). When God told Avraham His plan to wipe out Sodom and Amora, Avraham asked, “’Will You actually destroy the innocent with the guilty?” (Genesis 18:23) One might think that blind obedience is preferable to questioning God but the Zohar praises Avraham for his initiative in asking the tough question even as it criticizes Noach for his apparent complacency.

And let us not forget the Book of Job, pretty much the entirety of which is Job questioning God! (And at 42 chapters, Job is one of the longer books in Tanach!)

But keep in mind that not all questions are created equal! Of the four sons at the Seder, the “wicked” son is chastised because of the insincerity of his question. This is also the criticism of the questions asked by Korach when he opposed Moshe. These questions were not predicated on a sincere desire to understand; they were posed simply to oppose the status quo. All sincere questions are graciously accepted. Those intended to mock or to be dismissive, however, are shown the door.

In Pirkei Avos (2:5), Hillel says “an ignorant person can’t be pious, nor can a timid person learn.” The Bartinuro on this mishna explains, “If one is embarrassed to ask out of fear that others will mock his ignorance, then his questions will never be answered.”

Asking is a necessary component of growth in Torah. It’s not only permitted, it’s not only encouraged, ultimately, it’s obligatory.

Meet the Rabbi Behind Jew in the City's "Ask the Rabbi"