Super Bowl Sunday won’t be the same this year with the pandemic turning our annual football fiesta into quaint family affairs. But perhaps no one is more bummed out than Orthodox Jewish influencer and social media star, Meir Kay. 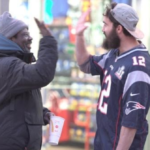 “It’s a real, real connection, a really strong night,” he says of Super Soul Party, an idea he hatched four years ago on a whim that has since turned into a nationwide movement.

He likens the Super Bowl to a national holiday like Thanksgiving and Christmas. Except on those days, people make a point to help those less fortunate. On Super Bowl Sunday, not so much.

He thought to himself, “the Super Bowl was coming, and it would be a good opportunity to bring people together,” which he was already doing on his social media, creating, what he calls, “spaces and places where people could come together and connect.” 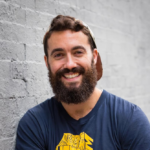 So he hit the streets of Manhattan, asking homeless people if they wanted to join him for a rooftop party, complete with food, drinks and even free NFL jerseys.

“I didn’t know what would happen, how it would go,” he recalls. “I approached a bunch of guys and they were down to go. We jumped in an Uber went to the rooftop and had the best service, open buffet and drinks.”

They also got something much more important: friendship and respect.

“They were so thankful and humble,” Meir says. “The real beauty was that they talked and connected as they watched the game. It was really powerful.”

“The future is to have a Super Soul Party in every state in America,” Meir says. “We’re breaking down barriers, helping people seeing each other as human, being less alone.”

On top of all food and fun, Super Soul Party also provides clothing, essentials like toiletries, and mental health counseling. 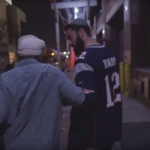 “Even if it’s one night, you never know what one night will do,” he says. “Even for the volunteers who go on to do more chesed and outreach.”

It’s a massive accomplishment for Meir, who was raised in New Haven before attending rabbinical school overseas. He now lives in LA. Like so many others who grew up in Chabad circles, Meir sees the world as his oyster when it comes to spreading kindness.

“We try to bring people together no matter their background with compassion and love,” he says. “We’re all G-d’s children. Everyone deserves respect.”

“Even without a Super Soul Party, you can volunteer at a soup kitchen or a homeless shelter,” he says. “Next time you see a homeless person on the street, take a pause and buy them a sandwich.”

The most important thing, he says, is in your words. He recalls the time he saw a homeless person holding a sign that read “I don’t want food. I don’t want a drink. I want to be seen.”

“To be seen and to be part of this world is really important,” Meir says. Which why next year’s Super Soul Party will be better than ever.

“[The current situation] is not great,” he says. “But it’s fuel for the fire to come back stronger next year.”

To learn more about Super Bowl Sunday and to support the cause, visit https://www.supersoulparty.org/