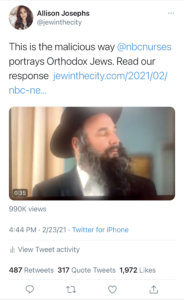 On Tuesday afternoon, we published this response to a shockingly pernicious, anti-Orthodox segment of NBC’s new show “Nurses.” We then posted a clip we filmed onto our Instagram and Twitter. The tweet went viral – the clip garnering almost 1 million views in a day – and suddenly news organizations started noticing. First FoxNews, then Hollywood reporter, JTA, Sun Suntinel. All of
our platforms started blowing up, people disgusted at how so many people OK’ed these horrible characters. By Wednesday, NBC Nurses began trending on Google.

As the social media, traditional media and Jewish organizations applied more and more pressure, at about 5:30PM – only just over a day since we first called out the episode, we saw that The Hollywood Reporter had confirmation from N
BC that this awful episode would be pulled from their platform! What an exciting and historic win – hours before Purim, no less! (After the story broke, the news spread to numerous major outlets like NYPost, Variety,Daily Mail, Daily News, People Magazine and many more, noting Jew in the City had called this out first!) 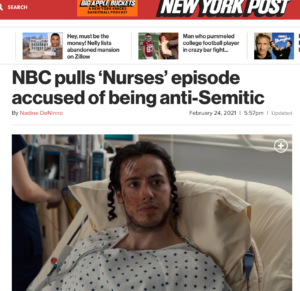 In 2005, I had a dream to change the world’s perception of Orthodox Jews. I had been raised to hate them, but upon meeting some personally as a teenager, my life changed. I saw how many wonderful, kind people there were in the community living enjoyable and meaningful lives. If no one corrected the public portrayal of Orthodox Jews in the world, countless other Jews would never have the opportunity to explore our deep and meaningful heritage and texts.

Jew in the City began with no funding or even a plan in 2007  – just a lot of passion to stand up for truth and nuance. Thirteen and a half years since our launch, with our talented and dedicated team and incredible community of fans and donors, we have launched a movement. But we are not done yet! Now that NBC is listening, we are planning part 2! Make sure to follow us and subscribe to our newsletter for our upcoming announcement and please consider making Jew in the City an organization you support once a year or with a small, monthly gift. We have made some exciting headway, and with your help, there is so much more we will do!