She Survived the Holocaust and Became a Bubbe to Thousands 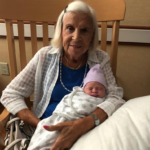 When Jew in The City asked me to write a story for Holocaust Remembrance Day, one person instantly came to mind: my dear, beloved, Bubbe Tina Weisz, OBM.

Bubbe Tina survived the horrors of the Holocaust, raised an incredible family and became a beacon of faith and a pillar in her community.

One very important sidenote: If you want to be technical, Bubbe Tina wasn’t my actual Bubbe. We weren’t related, not in the legal sense. But to thousands of people, just like me, Bubbe Tina was our Bubbe; no “ifs, ands or buts” about it.

“The most amazing thing about Bubbe Tina was how she made me feel that I was her grandchild,” said Rabbi Oratz.

For 27 years, Bubbe volunteered at a Jewish day school in Marlboro, New Jersey. Every single child, every single year, referred to her and loved her as their own Bubbe.

“She is a link between some of darkest times of our history and some of the brightest times of our future,” said Gary Teaman, whose daughter was one of Bubbe Tina’s students.

Bubbe was a fixture at shul almost every Shabbos morning. “Imagine sitting in a room and one woman walks in, and everyone is drawn to her, everyone is mesmerized by her, by her charm, by her grace by her good words for everybody,” recalls Rabbi Moshe Gewirtz.

“That’s my claim to fame, when every single person I meet says ‘you’re Bubbe Tina’s son,’” said Ed Weisz, one of Bubbe’s Tina five children. When she passed away in 2018, Bubbe left behind 15 Grandchildren and 17 Great Grandchildren. Since then, three more children have joined her legacy.

Bubbe Tina was five-years-old when her family was forced to flee the Nazis in Poland. They were on the run for almost three years before being sent to a DP camp in Germany and eventually making it to the States.

Bubbe didn’t just survive the war; She won the war, raising generations of proud, practicing Jews, including her Orthodox son Danny, whose dedication to Torah and mitzvot speaks volumes about Bubbe Tina.

“She never lost her faith,” Danny says. “From lighting candles to Shabbos dinner to making sure we had a traditional Torah education.”

How did she keep the faith after losing so much of her childhood during the Holocaust?

“I think she got it from her mother,” Danny says. “They witnessed miracle after miracle just being able to survive. They had a faith that G-d created the world, he’s there, he exists, and he runs everything.”

“To me, Bubbe Tina is everything that is about the spirit and perseverance of the Jewish people,” said Rabbi Mordechai Eisenberg. “She is a Bubbe for all of us.”

When Bubbe passed at age 83, the pain and sadness was felt by every single person who was graced by her presence. That emptiness has since been replaced by hope and appreciation.

“I am very thankful for her kindness and compassion,” says son Danny. “Her Yiddishkeit spoke to her empathy, sensitivity, caring and nurturing. It’s all tied to her Jewish neshoma. She was a very Godly person.”