The Graphic Novel Haggadah You Need At Your Seder

Unfortunately, for too many kids (and adults), the seder evokes a sluggishly boring experience that lasts forever. Conversely, for many kids (and adults) poring over comic books is an exhilarating, addictive experience that they wish could last forever. But what if you could take the excitement from a comic book and inject it into the haggadah? Holy Batman, you can! With the new Graphic Novel Haggadah!

Former Batman comics editor Jordan B. Gorfinkel (Gorf) is an observant Jew who has published a graphic novel haggadah uniquely designed to resemble a comic book. The goal is to bring new life and excitement to the seder table (and all seven days) by creating a haggadah that brings the family together to fulfill the mitzvah of Pesach while it “engages them in an interactive and energetic way.” There is also an emphasis on making it cool and relevant to everyone, as Gorf states, “This is a medium for all ages. You can enjoy it on whatever level you’re at” which is due to its visual appeal.

Growing up, Gorf moved around a lot which is what prompted him to turn to comic book characters for constant companionship. He especially appreciated the fact that those superheroes were “the ones that kind of matched the morality I believed in,” which is what aided his spiritual growth. The look and feel of the haggadah is one that reflects the themes of ethics and morality incorporated into comic book stories.

Gorf uses those themes to enhance the seder experience since it has “Jewish origins of the creation of sequential storytelling and graphic novels and comic books.” The point is to represent those stories and superheroes by adapting them to a Jewish narrative. Every detail and design is intentional in order to tell the story of the Exodus of Egypt as vividly as possible through this Jewish lens. The idea of this graphic novel is to take the esoteric ideas and stories that we tell at the seder table and present them in a whole new way that both educates and entertains everyone involved.

Early on in his career, Gorf stuck to his love for comics and continued refining his craft. Through his hard work and networking effort, he eventually landed a job at DC Comics who hired him as the assistant editor of Batman. This all happened after graduating from Boston University and attending the School of Visual Arts in NYC. He was also one of the founders of the first professional, Jewish Acapella group (Bitachon) and expressed that, “music and comics were always going to be coordinated in my life,” which were only branches of what he had in mind for future endeavors.

Now he is an expert in graphic novels and multi-media work and that enabled and facilitated his own projects. The Graphic Novel Haggadah is one of those projects and his aim was to create art within it that can serve as another form of commentary, being a visual translation alongside the Hebrew and English.

Pesach is about retelling and experiencing the dynamic story of Yetziat Mitzrayim, so what  better way to fulfill the holiday’s mitzvah of “seeing yourself as if you left Egypt” than a graphic novel! As Gorf puts it, the haggadah is like “a cliff notes or Wikipedia page of Judaism – it’s got everything” and so, the juxtaposition of the words and pictures are how one understands these “cliff notes” or insights and helps one retain much of its content.

The feedback for the haggadah has been overwhelmingly positive across the board especially from parents, as one dad says, “you’ve made my life easier” since it’s struggle nowadays to keep kids entertained and happy without a screen in hand. Gorf states that this is only the beginning of a whole line of graphic novels that will be made for all kinds of Jewish text to enliven its stories, messages, and morals which will make it that much more desirable and enjoyable to learn.

You can purchase the Graphic Novel Haggadah on Amazon or through Koren Publishers. 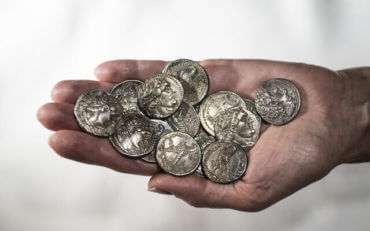 Where Does the Custom of Hiding the Afikomen Come From?