My paternal grandfather’s family assimilated so long ago that my great-great-grandmother used to spoil my grandfather by sneaking him pork chops in place of veal chops! Only one of my four grandparents was raised religious – my mother’s father. But like the rest of my recent ancestors, he too walked away from the ways of our forefathers.

Perhaps it was because his beloved brother died of Leukemia as a young adult, at which point my grandfather disavowed God. I have often wondered, though, if my grandfather’s departure from Torah and mitzvos began from a trauma in his childhood when he was almost killed for the “crime” of being a Jew.

My grandfather was born in Ukraine at a time when it was very bad to be Jewish. For years, my great-grandparents wanted to leave but couldn’t agree on where to go. My great-grandmother dreamt of returning to the land of Israel. My great-grandfather wanted to come to America. Since they could never decide on where to go, they simply stayed put. Then one day, their anti-Semitic neighbors decided to play the game “how many Jews can one bullet go through?”

They lined my grandfather’s family up and were about to shoot, but thank God, just in the knick of time, some Cossacks came riding through the village and accidentally broke up this impromptu pogrom. At that point, my great-grandparents knew that they didn’t have the luxury to argue any longer and fled to the U.S. with their three children.

While my mother had a connection to her frum “bubbe” and “zeide,” she was raised in a home with very little observance or Torah learning. When I found my way back to a religious life at sixteen years old, it was an uphill battle at first – convincing my mother to let me kasher the kitchen, convincing my father to not interfere with my keeping Shabbos, and trying to be devout in a world that was so far from religion.

One day, several months into my newfound Jewish commitment, my family was cleaning out the basement, going through boxes. We came upon some old Torah books that belonged to my mother’s grandfather – the last man in our family who had learned Torah and led a religious life. No one knew what these books were or what they meant, but I recognized them as holy and immediately told my family “these are mine.” I guarded them on the shelf of my teenage room, which was otherwise decorated in a typical secular American fashion. As I began to learn more, I discovered that these books were Mishnayos – the foundation of the Talmud – a sea of knowledge in which we all were illiterate.

As I got older, got married, and started a family, my children began to learn Mishnayos. My oldest two children are girls and they memorized the teachings from school and would recite them in a traditional sing-song rhythm. These words of Torah which had almost been lost were now filling my home. The profoundness of our heritage being saved did not go unnoticed to me.

But this past Shabbos, yet another chapter was added to the story. Although my family members at first opposed my religious changes, eventually each and every one of them were inspired to do the same. In fact, they even out did me – both of my sisters and my parents all made aliyah! The unfulfilled dream of my great-grandmother – to return to the land of our forefathers – four generations later – finally was realized. And my sisters each have built beautiful families which they are raising in our homeland – living as Jews and learning as Jews. 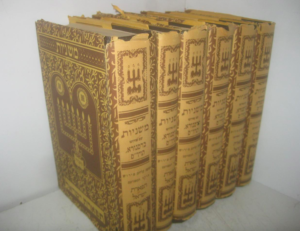 And what became of my great-grandfather’s precious Mishnayos? This past Shabbos, my entire family gathered in the Holy Land to celebrate my sister’s son’s bar mitzvah. My nephew is the first observant bar mitzvah boy in our family, since my great-grandfather. Perhaps the first bar mitzvah in our family in Israel since the Exile! From the youngest age, my nephew has had a love of learning and a precocious ability to sit in shul with his father and pray.

In honor of his bar mitzvah, I found out over Shabbos that my thirteen year old nephew completed shas Mishnayos. That means he learned all 63 tractates of a book that we almost lost in a land that we almost didn’t make it to.

I don’t know if my great-grandfather ever completed shas Mishnayos. But I’m sure he is so proud that his great-great-grandson did!