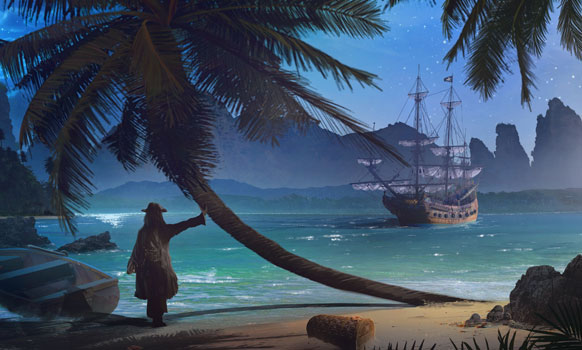 Pirates of the Carribbean…Who Kept Shabbos!

With last week’s release of the 5th installment of Disney’s popular Pirates of the Caribbean franchise, the world once again is fascinated by the corsairs, privateers, and marauders of the golden age of piracy. While there has been talk of Jewish Pirates, few realize that most of these pirates were observant Jews! Professor Steven Plaut of Haifa University contends that “There are reports that their galleys were kosher and that they abstained from raids on the Sabbath.” Many of them were fleeing the Spanish Inquisition, seeking revenge for persecution on the high seas.

The historian Josephus mentions pirates in his digests observing early life in Israel. According to his book The Wars of the Jews, the coastal enclave South of Tel Aviv which is today known as Yafo (Jaffa) was once the most important port in the Mediterranean. During the post-Maccabean wars between the Jews and the Romans, observant Jewish pirates regularly disrupted trade in the area. They won two great battles for control of the port over the Romans, but lost the third in one of the bloodiest battles in Israel’s history. It would be 1400 years before Jewish pirates came back to man the seas in a significant way.

During the “Age of Exploration,” the Iberian countries of Spain and Portugal dominated the Atlantic. This was helped in large part by the cartographic and navigational skills of the Jewish people living there. Simultaneously, the Spanish Inquisition forced many Jews to convert, and those that didn’t became enemies of the state, sent out of their Sephardic home countries. Edward Kritzler states in his book Jewish Pirates of the Caribbean, that the combination of seafaring skills, an outlaw attitude and anger at the torture and persecution set the stage for a flourishing age of Jewish piracy. Here are four of the most notorious Shabbos-keeping pirates during this time:

Rabbi Samuel Palache –  “The Pirate Rabbi” is possibly the most famous of the observant Jews who sailed the high seas during the golden age of pirates. He followed in the footsteps of his father in Morocco and trained to become a rabbi. The family went to strengthen Moroccan ties with the Netherlands, where Palache ingratiated himself to the Dutch government, becoming an envoy and founding the Sephardic community there. As a merchant and rabbi, he traded on the seas and was known for going up against Spain in such situations. Kritzler says that, “Samuel’s allegiance to the strictures of his faith included his diet, and he brought along a Jewish chef to prepare kosher meals.” Although he was caught and tried by the English at one point, the Dutch government petitioned for his release. He died a hero for the Dutch, the Jews and also the Moroccans who were still at war with Spain.

Sinan Reis – Known as ‘The Pirate Jew,” Reis was a commander in the Ottoman Navy. He and his family escaped to Turkey during the Spanish Inquisition. There, he became a follower of Captain Barbarossa, the most infamous pirate of that day. Together, they were so successful in their battle against a Spanish ship that per Kritzler, here Reis earned the nickname and the Ottomans began their dominance of the Mediterranean in earnest, with Reis as one of their top Naval Commanders.

Moses Cohen Henriques – Henriques began his life in Portugal and was publically tortured during the inquisition. He vowed revenge and made his way to Amsterdam, where he became a close associate of Henry Morgan. They were funded as privateers and got their vengeance when they captured a Spanish fleet carrying a fortune worth over $1 billion. According to some reports, he was known for making someone who knew how to cook kosher food was always aboard his ships. He created a community of Jewish pirates on an island off the coast of Brazil and was never captured.

Yaakov Curiel – Curiel was raised as a secret Jew in Spain and because his family’s Christian cover was so believable, Curiel rose to become a captain of a Spanish fleet. When caught, his own sailors freed him out of loyalty. He became a feared pirate, bent on revenge against the Spaniards. After years of piracy in the Caribbean, Curiel travelled to Israel. Much like the story of Reish Lakish, he did teshuva (repented) from his marauding ways. Plaut says that Curiel made his way to Tzfat where he became enthralled with the teachings of the Holy Ari (Isaac Luria). He became a student of kaballah and one of the Ari’s top students, even meriting to be buried near him.

Is It Weird That I'm Worried How My Kids Treat Alexa?