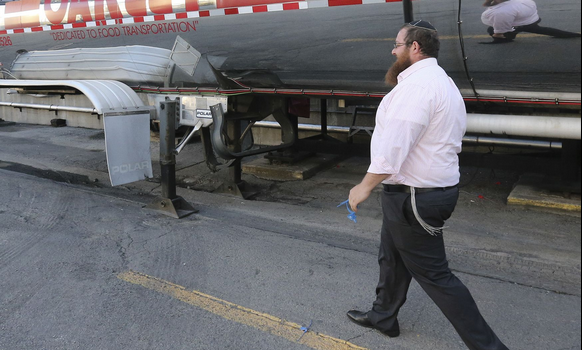 Jared, Ivanka and That Friday Night Flight: Experts Respond
Last week, Politico reported, citing a “White House official,” that Jared Kushner and Ivanka Trump got special permission from a rabbi to fly to Saudi Arabia on Shabbat as part of President Trump’s first foreign trip. “Since their unique status required them to make themselves available to the ruler, they were allowed to violate various rabbinic prohibitions,” Orthodox Rabbi Jeffrey Woolf, a Talmud professor at Israel’s Bar-Ilan University, told the site Jew in the City.

Saudi Arabia, UAE Among 104 Countries Making Kosher Food
According to the Orthodox Union, the United Arab Emirates and Saudi Arabia are now among the 104 countries worldwide where the kashrut authority has supervisors overseeing the production of kosher products. In March, the OU sent two kashrut supervisors to the region, one to a factory in Saudi Arabia and one to a factory in Dubai, one of the seven emirates of the United Arab Emirates.

New York-Presbyterian Axed Orthodox Jewish Paramedic Over Her Religious Refusal to Wear Pants: Lawsuit
Brooklyn paramedic Hadas Goldfarb is suing the city and a Manhattan hospital that fired her for wearing a skirt to work. The Orthodox Jewish woman said her religion’s modesty tenet prohibits her from wearing pants, and that the FDNY dress code for emergency medical technicians discriminates against her religious practices.

L’chaim! Louisville Family Works to Keep Bourbon Kosher
There’s nothing mystic about the kosherizing process; instead, it simply involves a certified rabbi, some pretty detailed cleaning, and some light paperwork. In Kentucky, the rabbis doing the certifying are likely members of the Litvin family, who have been certifying products across the state for decades and recently gained national attention in a Wall Street Journal article.

What The Broken Tablets Can Teach Us About Coping With Loss

Pirates of the Carribbean...Who Kept Shabbos!