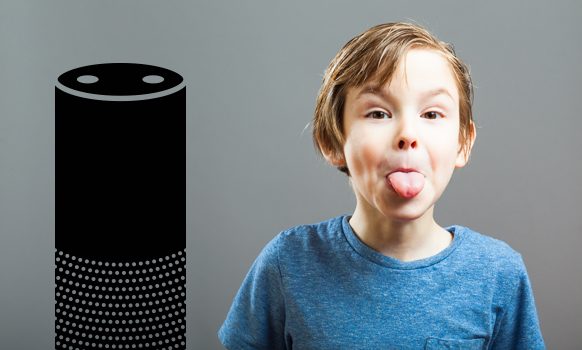 Is It Weird That I’m Worried How My Kids Treat Alexa?

Last Shabbos, we thought we had turned off Alexa (the intelligent personal assistant developed by Amazon), but then, at just past midnight as I told our guest, “I’m an extreme moderate,” she woke up and said, “You want modern music? OK!” She then proceeded to blast black gospel music throughout our kitchen. Which is ridiculous, because gospel is clearly not modern!

Then, today, when I was talking to my kids after school, she thought I said “shopping list.” Even though I told her I was was not interested in shopping, when I checked my email an hour later, there was an order of snacks from Amazon. $74 worth of  snacks, to be exact. At first I thought it was fraud, but then I realized – thieves don’t send 42 assorted bags of Cheez-Its, pretzels, and animal crackers to your house.

While the jury is still out as to whether Alexa actually helps or is just helpful at giving us great stories (even as I type this, my teenage daughter was listing all the things she’s stressed about and Alexa, in perfect timing, interjected, “Sorry, I can’t help with that.” Thanks, Alexa.) her addition to our lives has raised a moral dilemma for me: is it bad if my kids, and by kids I mean “my boys,” (my girls are too old to boss around robots), say crazy things to this non-sentient being?

My sons, 6 and 8, think talking to (and by talking to I mean “annoying”) Alexa is a riot. Does she know Siri? (By reputation only.) Does she poop? (Most of their conversations revolve around poop.) Is she hungry? (See above reference to large snack order.) Their questions and demands feel harassing at times. But is there actually harm at shouting crazy things to a robot or am I crazy thinking this is an issue? And is there any wisdom Judaism might offer on this topic?

As I was racking my brain for an answer, I realized that Jewish tradition gives us the perfect answer to this dilemma! It cautions us to be careful and thoughtful around inanimate objects all. the. time. For instance, the Mishna Brurah tells us to cover our challahs on Shabbos to keep them from “getting embarrassed” as the blessing over bread normally goes before the blessing over wine, but on Shabbos we bless the wine first.

The midrash tells us that Moses was not permitted to strike the Nile during the plague of blood because he had to show this river “gratitude” for saving his life as a baby. And then of course, there are the countless ways we honor Jewish items of sacred significance – we kiss mezuzas, tallisim, tzitzis, tefillin, and prayer books.

The challah, the Nile, and the prayer books have just as many feelings as Alexa and yet we are careful around them. Why? Because Judaism believes that how we act is not just about how the person receiving our actions will feel but how our repeated actions change *us* as people. We want to build up our “good deed muscles” as it were, even when we’re interacting with inanimate objects. Because if we’re careful around a challah’s “feelings,” how much more so will we care for an actual sentient being?

So I plan to stop my boys’ Alexa shenanigans, even if I feel a bit silly telling them to watch how they talk to our robot. To show appreciation, Alexa may even order me some snacks!

Pirates of the Carribbean...Who Kept Shabbos!

The Orthodox Jewish Volunteers Who Help A Child With Cancer