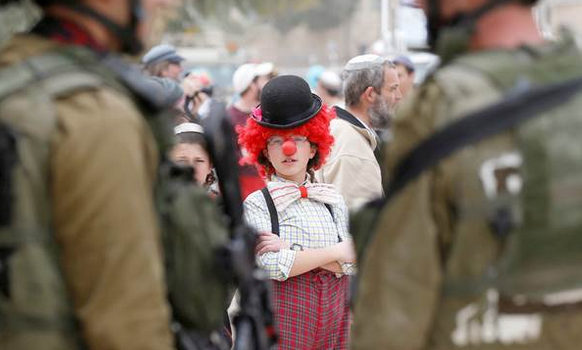 How to Host a Shabbat Dinner and Why You Should—Even if You Aren’t Celebrating
The rituals of this Friday night tradition have become so much more than a religious experience. What’s better than winding down the week at home filled with your favorite people and the scent of a chicken roasting in the oven? Shabbat—the concept of spending quality time with friends and family while taking a break from scrolling on Instagram—is for everyone: an ancient antidote to our modern ailments.

Purim Parades Across Israel, Revelers Rejoice in London and Brooklyn
Jewish communities celebrate the defeat of Haman, adviser to the Persian King, and his plot to massacre the Jewish people 2,500 years ago. In diverse communities around the world, this photo essay captures the joy of the day, even in places you wouldn’t expect.

Ultra-Orthodox Jewish Women Open Their Homes to Visitors
The strict life of ultra-Orthodox Jews is a mystery, even to secular Israelis who live here, because they usually keep their traditions behind closed doors. Now, Naomi Miller has found a way to share her ultra-Orthodox lifestyle and establish a new source of income for her family: inviting tour groups to see what it’s like for a fee.

Kosher Pizza War Erupts In Hasidic Brooklyn – And Jewish Court Slices The Pie
There’s a kosher pizza war brewing in the heart of Hasidic Brooklyn — and a Jewish religious court has laid down a Solomonic decision about how the pie is going to be sliced. Basil Pizza & Wine Bar, an established gourmet spot on Kingston Avenue, the main drag in the Crown Heights neighborhood has sued Calabria, which opened its doors the first week in March — directly across the street, in the local Beis Din.

New York Today: A Bookbinder’s Craft
In the basement of the Congregation Sons of Moses synagogue on the Lower East Side, hulking iron machines rattle and clank amid rolls of colored paper and strips of dark leather. There, a bookbinder practices a fading craft: stitching, slicing and pressing stacks of paper into books.

What’s a Good Jewish Girl To Do? This
Two Orthodox sisters living in Brooklyn want to break the stigma associated with dressing modestly. Australian transplants Simi Polonsky and Chaya Chanin are the creators of fashion label The Frock NYC, which adheres to the strict dress code required in the Orthodox Jewish community — but does so with a fashionable flair.

The Muslim And Orthodox Jewish Women Who Chatted On A Plane