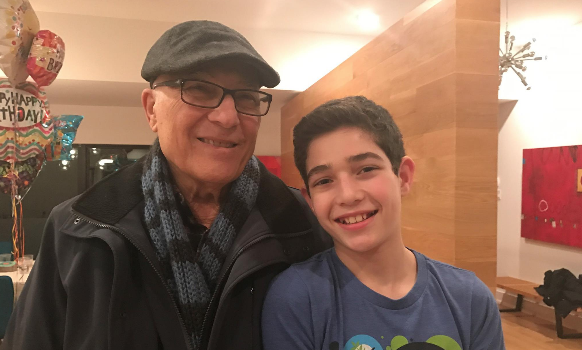 Kim Hunter’s viral Facebook post about receiving a gift bag from a bar mitzvah boy during her cancer treatment is something that may have come across your newsfeed, but did you know that the kindness was done by a yeshiva boy and his friends? With over 5000 likes and hundreds of words of praise, it is a breath of fresh air to see such good will both from and to religious Jews in today’s uncertain climate. 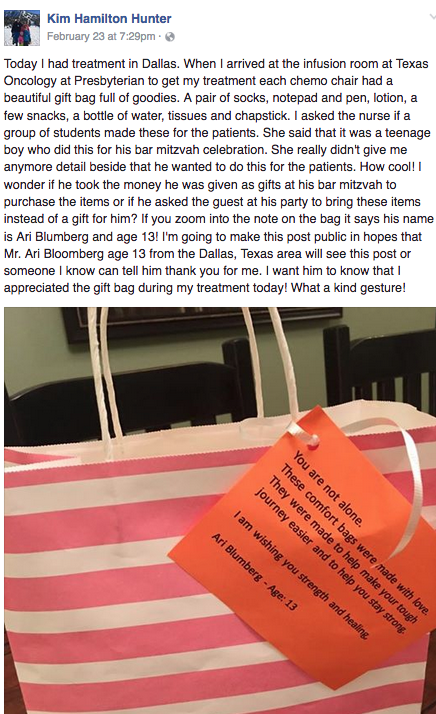 Hunter’s original post reads: “Today I had treatment in Dallas. When I arrived at the infusion room at Texas Oncology at Presbyterian to get my treatment each chemo chair had a beautiful gift bag full of goodies. A pair of socks, notepad and pen, lotion, a few snacks, a bottle of water, tissues and chapstick. I asked the nurse if a group of students made these for the patients. She said that it was a teenage boy who did this for his bar mitzvah celebration. She really didn’t give me anymore detail beside that he wanted to do this for the patients. How cool! I wonder if he took the money he was given as gifts at his bar mitzvah to purchase the items or if he asked the guest at his party to bring these items instead of a gift for him? If you zoom into the note on the bag it says his name is Ari Blumberg and age 13! I’m going to make this post public in hopes that Mr. Ari Bloomberg age 13 from the Dallas, Texas area will see this post or someone I know can tell him thank you for me. I want him to know that I appreciated the gift bag during my treatment today! What a kind gesture!”

Ari’s project was created in honor of his cancer-battling grandfather. 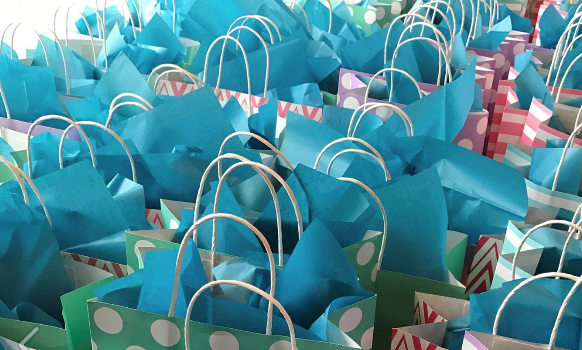 Ari and his friends assembled more than 100 bags for local cancer patients at Texas Health Presbyterian Hospital. Ari’s mother Sharon Blumberg relates, “We were thinking about a good mitzvah project for Ari’s Bar Mitzvah and then my father was diagnosed.” Ari’s Saba has been fighting the stage four Lymphoma he was diagnosed with in December. The prognosis thankfully looks good, as he has been treated at the same hospital where Hunter has chemo. Saba brought over a similar bag that he had received. Ari knew that he wanted to create something that would be truly helpful to patients. He put out the word on Instagram and soon he received both cash donations and the items themselves that they had thought would be useful. Sharon knows why it inspired people to donate: “When its for a personal reason, it makes it that much more meaningful to help.”

Kim Hunter was excited to speak about the experience. “I think it was timely… it was all God’s doing.” Despite living four hours away, Hunter goes to Texas Health to treat the cancer that has challenged her life for the past four years. “The battle of my life started in December 2012. I used to be very public 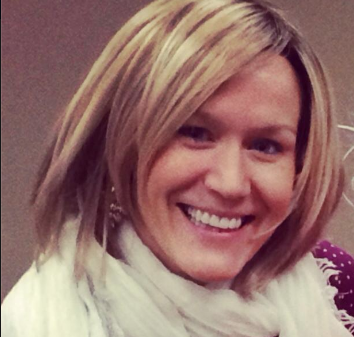 with my friends and family and let them know whats going on, but then I stopped. If people want to know they will ask me. By my faith, I want to speak healing.” Despite that, Hunter had been feeling down about her prognosis lately. “About a month ago I was in fear of ‘oh my gosh its back.’ I had an MRI, I walked into the infusion room and I saw all these gift bags. Then I sat down and read what he wrote…It took a lot of time and effort for this kid to put together these bags. I want to thank him.” The bags were just what the doctor ordered.

Hunter grew up Baptist but is now a non-denominational Christian. Her family raised her not to hate anyone. “My mom always said we always stand with the Jewish people and Israel. We worship the same God.” Before this, Hunter’s closest understanding of Judaism had come from starring in a high school production of I Never Saw Another Butterfly. “A [survivor] came out to talk about his time at the camps. I was 15. It was my first awareness of the Holocaust.” A friend of Hunter’s pointed out to her that there has been so much anti-Semitism in the news lately. It struck her that maybe she could stand up as an advocate for Jewish people, at this time when it is sorely needed. “I have a group of women who sit and pray for me. One said ‘this is God doing something through you to help the Jewish people.’ I think God has prepared me to be an advocate for the Jewish community. If I’m presented with the opportunity I will stand up.”

For Sharon, when she saw the Facebook post (which had been forwarded to her multiple times), she was in tears. “I called Ari in right away…I can’t believe how widely its been shared. When people see something that’s so positive, it pulls on people’s heartstrings.” Sharon’s father was very touched by Ari’s act of kindness. Ari shares,”We emailed a ton of friends and family. We knew what we wanted so we told them, and it happened!” Ari invited his friends to come over and they all packed the bags quickly. Two weeks ago was his Bar Mitzvah party. His act of kindness was mentioned in everyone’s speech. Sharon laughs, “The rabbi said, ‘this is my first celebrity bar mitzvah.'” The kids in their community do mitzvah projects all the time. “He didn’t even think this was such a big deal. This is just what we do. Every week they do a mitzvah core and other projects.”

So many Jewish people ended up commenting on the post, complementing Ari for being a Kiddush Hashem. Sharon elaborates, “the ones I loved seeing were the ‘I’m going to do something like this.’ The other comments that brought us to tears were from cancer patients saying how this caring gesture helps them so much.” It is clear that chesed is a top priority to Sharon, and that this has been inculcated in her children. “I was at the Starbucks drive-thru, and I thought I would pay for the coffee of the person behind me in line. But when I get to the window, they told me that the person ahead of me had already paid for me. They were grateful that I let them cut ahead of me in line. I went ahead and paid for the car behind me. It would be great if [the kindness] could keep on going!” Like Ari, Sharon is humble about the experience. “It doesn’t take that much. You can do little things and make such an impact.”

Hunter is especially touched that Ari did all of this with no idea of the lives he was going to touch. “He [didn’t] know who he’s going [to give to]. He’s just doing what’s on his heart and serving the best he can.” Hunter and Sharon have been in contact and they are due to possibly meet each other next week. More than that, Sharon, who owns a children’s footwear company is sending Hunter’s children free pairs of shoes. Hunter is clear on the deeper meaning of the entire kindness. “After I posted it and made it public, I woke up from my treatment. All these people sent messages from Israel that they were praying for me… There might be one day I don’t have to do these treatments. The plus side [of being sick] is that I never would have known why I support [the Jewish people], now I know why.”