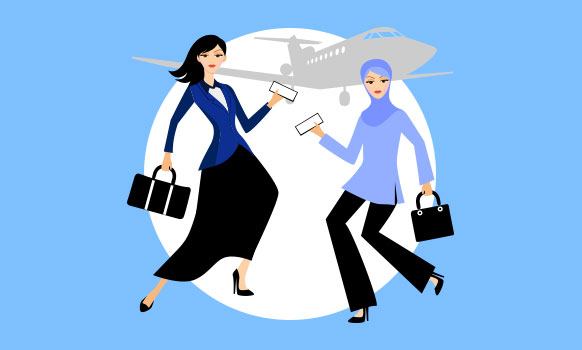 The Muslim And Orthodox Jewish Women Who Chatted On A Plane

It was my third time in just over a month that the TSA had stopped me because I was wearing a hat over my wig (and apparently, this sends them into a tizzy). By the time I got to my seat on the plane, I was still feeling annoyed that I had not yet learned my lesson, when I noticed another hair covering woman in the seat next to me. But this wasn’t an Orthodox Jew. This woman was wearing a hijab.

As the plane took off, I pulled out my siddur, said morning blessings and the wayfarer’s prayer. A moment into my prayer, my Muslim seatmate began uttering her own silent prayers. I was struck by the poignancy of it all: two of God’s children, speaking to Him, at the same time, in their own language.

I was curious as to what she was saying, so I struck up a conversation. After a few minutes of small talk, I asked her, “Did I notice you praying before?”

“Yes,” she said. It’s hard to find a place to pray in the airport.

“Was that a traveler’s prayer you were saying?”

“No,” she replied, “just regular morning prayers. We do have one of those, but there’s just so many prayers.”

“Yes,” she explained, “for before and after the bathroom.”

Fascinating, I thought. Perhaps a pre-bathroom prayer could come in handy sometimes, especially with Passover coming up!

“We only have an after bathroom prayer,” I continued, “ What about food? You say something before and after?”

“Us too,” I replied. “What about thunder, lighting and rainbows? Got any blessings for those?”

“I think thunder,” she said.

Once I was done comparing prayer and blessing notes, the conversation moved onto why I was flying. I explained our mission at Jew in the City: that we are reclaiming the Orthodox Jewish brand from the crooks, creeps and extremists of the community who have hijacked it.

She lamented that the extremists in her community have also taken over the brand. And like me, she was perturbed that the media only depicted the worst of the community. Her son had faced so much hate for being Muslim, he no longer was observing. I wanted to know if she had other fellow moderate Muslims she was connected to.

She explained that whenever they found more open-minded Muslims, the extremists who practiced the religion based on fear and looking down on everyone else always seemed to swoop in. Though, we thankfully don’t have suicide bombers amongst the Jews, the most extreme, extreme factions (called Sikrikim) have resorted to violence over the years. And certainly practicing a fear-based and judgmental Judaism exists in parts of the Orthodox world too.

Next we were onto Halal and kosher. She was concerned that Halal meat wasn’t as ethical to animals as it should be. I said similar concerns have come up in the kosher sphere as well. She had given up Halal for that reason and switched to grass-fed, organic meat. I explained that in my community someone who covers their hair would almost definitely still keep kosher, so the order of priorities was interesting.

We discussed that although extreme and forced modesty in both our religions is bad for women, the way the secular world hypersexualizes women (I told her about the Skin Gap) is also harmful. She was asking where I bought my hat and we exchanged more notes.

But then I couldn’t resist – so I brought up Israel. I was disappointed about what came next.

“If only the settlers stopped building, there’d be peace,” she explained.

“Did you hear about the deal that Ehud Barak offered Arafat who then stormed out of the meeting and started the Intifada?” I asked. “He gave him almost everything he wanted.”

“I heard that the deal wasn’t so good,” she continued. “You can’t practice collective punishment. Someone kills other people and then his relatives are punished? That’s wrong.”

“I hear you,” I said, “but how do you dissuade someone from killing others if he’s already willing to give up his life? And in terms of settlements leading to violence, what about Gaza? Israel gave up all of Gaza to promote peace and the Palestinians have used the land to launch missiles into Israel.”

“That’s wrong,” she agreed, “But the settlers cheer when Arab babies are killed.”

“Wait, what?” I asked. “I have never seen that. That is horrifying. If that has ever happened I strongly denounce it. I know Jews in settlements. They would never cheer at the loss of any life. I have seen Muslims cheering after terror attacks.”

“I think there should just be one state where everyone can live,” she continued, “Not Jewish, not Muslim, just a secular state for all people.”

“The Jews do let safe people live in Israel,” I said, “A hjabi woman recently won a cooking reality TV show. When the Muslims were controlling Jerusalem, the Jews couldn’t enter the Old City. Once it went into Jewish hands, it became open to everyone who doesn’t want to blow it up.”

I had clearly ruined the mood and after the conversation, I wished that I had mentioned that although she believes the Jews have no stake to that little sliver of land, we have spent the last two thousand years, since being exiled from it, turning towards it three times a day as we pray, mentioning returning to it thrice daily in prayer and after every time we break bread. And once a year, we spend a day in mourning, crying over it on Tisha B’Av.

But I didn’t get to say any of it. We parted ways and exchanged pleasantries as we said “Good bye.” We didn’t make peace in the Middle East in our short cross-country trip, but I hope each of us walked away with a little more understanding and will report the information to our own communities. I’ve just done my part.