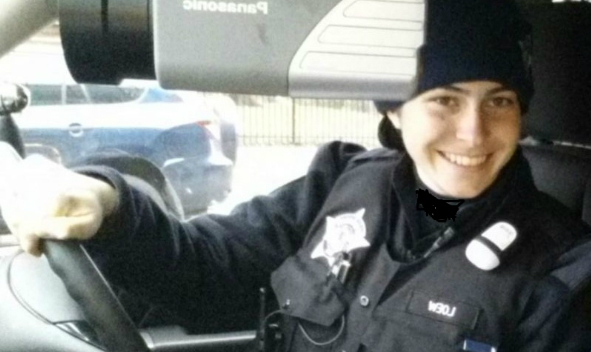 When picturing an Orthodox Jewish woman, most people conjure up an image of a lady carrying a baby, not a gun. But for Ariella Loew, it seemed like there was no reason she couldn’t do both! Loew grew up in Lincolnwood, just outside of Chicago in an Orthodox family and though she had never seen a frum female cop before, there was a female role model who impacted her from a young age. “My mom was already doing something that most frum women don’t do – she was a radio newscaster. When she walked in for her interview she told them she couldn’t work on Shabbos, and they said ‘okay its not a problem.’ Then she said ‘I also need all these other days off’ and she made a career as a news reporter for over forty years. She showed me that Orthodox people can do things that other people think they can’t.”

Loew is not exactly sure where the inspiration to become a police officer came from.”When I was twelve years old I decided I wanted to be a cop. When I was little I always wanted to be a builder, but I just liked playing with Legos…and then one day I realized I needed math to be a builder…and I’m terrible at math, so I decided I’d be a cop instead.” Loew notes that September 11th occurred when she was twelve and it is very conceivable that witnessing the heroic efforts of the police on that day impacted her decision.

Though a BA is not necessary to become a police officer, Loew went to college where she studied Criminal Justice so she’d have a back up plan. Every summer during college, she did an internship. Her first one was with her hometown police department. “That summer sealed the deal for me. I loved every moment that I was working with them. I liked the adrenaline rush. I liked the different calls we went on.” Even though she wasn’t always allowed out of the car by the officer training her, she still remembers how much these early runs impacted her. “I had been driving around on a midnight shift, a ride along…some car had his headlight out going the opposite direction. The officer I was with busted a U-Turn, and went after him. We went to pull the car over, and the car…took off down the road…The officer knew that there was a cul-de-sac about two blocks down, so the car would have nowhere to go. He went after it, and …we found out that it was a stolen car. So then just as we caught him at the cul-de-sac, three guys popped out of the car and went running. I wanted to get out of the car, unfortunately (probably also fortunately) I couldn’t.”

“It is a long process to apply. You have to take a test, a fitness test…a polygraph, a psych evaluation… an interview… a conditional offer. In Chicago you can’t go to a police academy unless you are sponsored by a department. I went to the Chicago Police Academy…which is about sixteen weeks long.”

While the response from her department and immediate family has been supportive, Loew has encountered naysayers. “I know that a lot of people weren’t thrilled with the idea, ‘…it’s dangerous, there are other things you could do.’ My grandmother specifically was very unhappy and spent from when I was age twelve until I graduated from Police Academy trying to convince me to be a kindergarten teacher…until she came to my graduation she was saying ‘maybe you’ll change your mind.’ But then at the graduation she was pretty proud of me and enjoyed showing me off after that.”

In terms of the halachos involved, Loew has done her homework. “I had a ton of people say to me ‘good luck getting Shabbos off, you’re never going to be able to get that’ and I actually spoke to a rabbi before I seriously started applying to jobs, just to find out what I could and couldn’t do. I know that some rabbis say being a doctor is pikuach nefesh (saving a life) and you can work on Shabbos. Rabbi Gedalia Dov Schwartz was the person I spoke with who said it was okay. There are things I couldn’t do and things that I could do in the application process.”

Shabbos remains the main challenge within observance as an officer, but there remain vast differences between Loew and her colleagues. “My ideals and background are completely different from them…the way we speak…we still have the same end goals in mind, but how we [get there] is quite different.” For other would-be Orthodox trailblazers out there Loew advises people to take it slowly and work out the kinks, “You have to have the determination to do it.” When you encounter negativity, she says “Use [it] to prove them wrong.  Use it as more of a challenge then anything else.”