Teshuva: If a Garbage Can Can, So Can You! 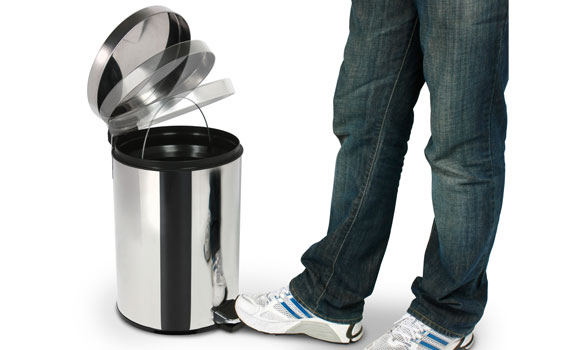 I recently bought a hundred dollar garbage can. Now, now, I know what you’re thinking. Believe me, my husband was thinking it too. But there was a very good reason that I splurged on this purchase. It was one of those pretty brushed-aluminum jobs, but what really made it worthwhile was that it was warrantied for ten years. So as I explained to my husband, it was only costing us a mere ten dollars a year in garbage can expenses – and that was clearly in our budget!

After a year of happy garbage can usage, the first one broke, so I brought it back to the store and exchanged it for a new one. Boy, was it a good year in the world of garbage can technological breakthroughs! This new can was not only pretty, it had a lid that was rigged to lower slowly enough to not make any noise when it shut. I kept opening it just to watch it close, and the work that I subsequently did around the kitchen was suddenly so much more pleasant without the sound of a clanking lid.

And then I thought about how those garbage can engineers were able to construct a lid that fought against the force of gravity (which, if you think about it, is a pretty formidable force), and yet we people often resign ourselves to not fight some of the internal forces that we ought to overcome. Maybe it’s a bad habit, maybe it’s a feeling you get every now and then that you should learn more or observe more Jewishly (but you weren’t raised like that, so how could you possibly change?). We sometimes like to excuse our lack of change by calling on the expression, “You can’t teach an old dog new tricks.” But friends, don’t compare yourselves to a dog – compare yourselves to a garbage can!

Confessions From a BlackBerry Addict