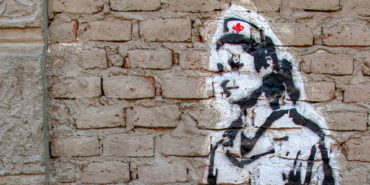 How Faith, Prayer, And Living With Intention Has Carried This Orthodox Jewish Nurse Through Covid

Growing up in a religious home in Far Rockaway, Rachel Travis received “a great education. [Yeshiva] was a great primer for morality, for ethics, for what it means to be a bastion in the universe and always remember my faith.” Travis worked in finance and then ultimately got a degree in Chinese Medicine. “I wanted […]

This Orthodox Jewish Family Has Had Two Generations Serving in the U.S. Marine Corps

To have one generation of an Orthodox Jewish family in the United States Marine Corps (USMC) is pretty amazing, but for the Carlsen family in Chicago, they are honored to have two generations who have served or are currently serving our country. Chaya Leah Carlsen believes that her father’s time in the USMC inspired her […]

The origins of the universe is a contentious debate between scientists and theologians, but theoretical biophysicist, Rabbi Dr. Jeremy England of Brookline, Massachusetts doesn’t believe it has to be. Currently a senior director in artificial intelligence at GlaxoSmithKline, a principal research scientist at Georgia Tech, and an ordained Orthodox rabbi, England developed a hypothesis during his […]

Dr. Jeffrey Kranzler: Orthodox Jew, therapist, and comic book creator puts the “holy” in Batman. Well, not Batman exactly –  his comic book hero is called  The Crimson Protector. But it was holiness, in part, that led Kranzler to the field of mental health. Not only is nearly everyone in his family involved in this […]

Aura Schwartz is not the typical Hollywood make-up artist. Growing up Lubavitch between the bright lights of L.A. and Chabad schools, Schwartz has always bridged both worlds. Since her parents were the active Chabad Rabbi and Rebbetzin in town, she recalls, “We had everybody come through our house,” from professional producers to directors to musicians. […]

Shevi Rosner is like many front-line health care workers around the world, who are risking their lives each day to save others during the Coronavirus pandemic. As an observant Jew, she also has the opportunity to make a Kiddush Hashem through the Orthodox Jewish Nurses Association, where she has fundraised to procure masks and necessary […]