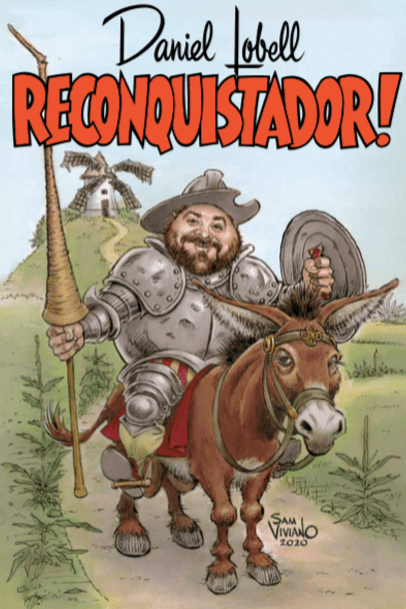 When I was a child, I learned about my family’s roots. We were from Spain, and during the Spanish Inquisition, we were expelled from the country, along with the rest of the Jews who wouldn’t convert to Christianity. My family eventually ended up in Turkey, and some of my cousins still live there today.

Today, I’m a comedian, and I’ve toured the world doing standup. Several years ago, one of the places I went to was Spain, which I instantly loved. But, I had mixed feelings too. It really got me thinking about my Sephardic roots in a whole different way. It opened my eyes up to what we had and what we lost and left me wanting to know more.

I decided that I wanted to return to the country to explore the Jewish history of Spain. I would record my new standup special at the same time.

So in 2015, after my wife Kylie Ora Lobell and I got married, we went on a honeymoon around the world, stopping in Spain along the way to film a documentary/comedy special about Sephardic Jewry in Spain. We called it “Reconquistador!” which is a play on the Spanish word for Spanish colonizers.

When we arrived in Spain, I noticed how much jamón (dry-cured ham) there was. In every deli and restaurant there were pig legs hanging on the walls. I cracked a joke that there must have been lots of pigs in wheelchairs roaming around the country.

I found out that during the Inquisition, in order to weed out the Jews, restaurants would put ham into every dish they were serving. If someone didn’t eat it, they knew that person was a Jew.

In the Inquisition, thousands of Jews were tortured and burned at the stake. Many were forcibly converted. Others, like my family, escaped to nearby countries. There are still large statues of Queen Isabella I and King Ferdinand II, who led Spain during the Inquisition, around the country.

During our trip, Kylie and I went to Girona, the Jewish quarter. There’s a Jewish museum there. It feels like other Jewish museums. “There used to be a thriving Jewish community here, but we killed them. Now, here’s a museum.”

In my film, I talk about how it was painful for me to visit the museum – which had the name “Lobell” everywhere. I felt the impulse to joke about it, but I had to live with the pain of it and try not to make jokes. I saved that lightheartedness for my standup sets, which I did in Barcelona.

One of the most poignant parts of the trip was going to a Chabad for Shabbat services. There were heavily armed guards outside of the synagogue who questioned my wife and I before letting us in. They escorted us to the rabbi’s house for Friday night dinner. It felt like we were fugitives walking in the street. What did we do wrong? Was it wrong to be a Jew? In the 21st century in Spain, we were still facing antisemitism and hate.

There are Jews in Spain today, including my cousins, who moved there from Turkey a few years back. In 2015, Spain said it would be giving citizenship to the descendants of the Jews who were expelled during the Inquisition as a way to right the wrongs of the past. But as of 2021, they had rejected thousands of applications. Thousands of other people never received a response. It doesn’t exactly surprise me.

Right now, antisemitism is on the rise. We talk a lot about the Holocaust, which is extremely important, but our people have faced other traumas, like the Inquisition, as well. It was important to me to share this part of Jewish history.

In my standup act in “Reconquistador!” I joke that when you expel the Jews from your country, you have to bring them back if you want to laugh. I’d like to think that my film touches on all the emotions. Happiness. Sadness. Anger. Frustration. Joy.

I am hopeful that at the very least, people will become more educated about Sephardic Jewish history. And, at the same time, I hope I can make them laugh as well.

“Reconquistador!” is screening in New York City on Sunday, November 20 at 12:30pm. Get your tickets here. To bring the film to your synagogue or city, please email Kylie@Koldigitalmarketing.com to set up a screening. Learn more at ReconquistadorMovie.com.

Danny Lobell is a stand-up comedian, who filmed a documentary/comedy special about Sephardic Jewry in Spain. To bring this documentary, “Reconquistador!”, to your synagogue or city, please email Kylie@Koldigitalmarketing.com to set up a screening. Learn more at ReconquistadorMovie.com.