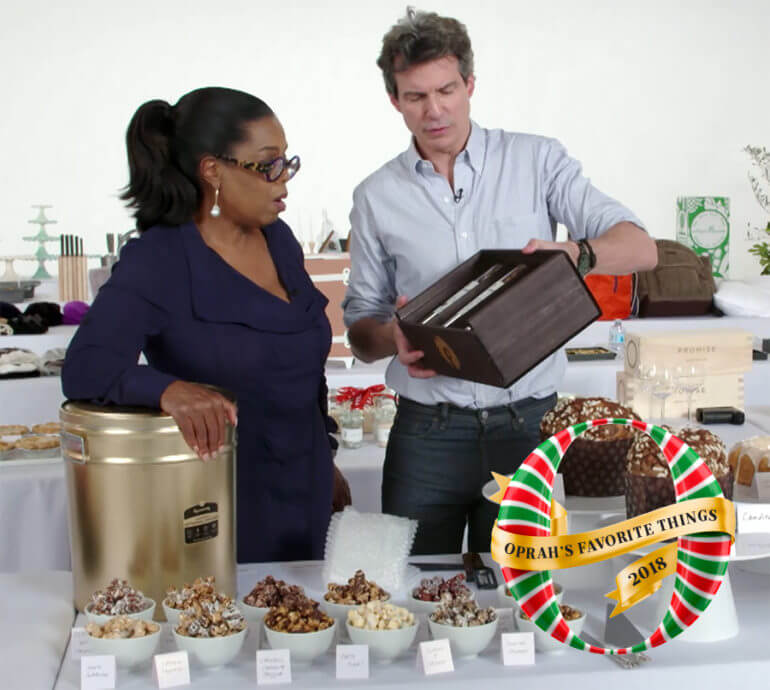 Popinsanity Gourmet Popcorn is a business that almost never started. The popcorn machine that made the first batch of the heavenly and now uber-successful snack (even Oprah thinks so!) was just a day away from being at the curb, awaiting its fate in a garbage dump somewhere.

Yankey, the son of a mashgiach (kosher supervisor), always had the food industry in his orbit. He worked for years helping his father in various hotel kitchens and ultimately became a chef himself. After many years as a professional musician, successful caterer and owner of a bakery in Miami, he decided to move to Monsey, NY with his wife and open a cafe. Due to circumstances beyond his control, the project fell through a few days before the grand opening. He tried to return and sell as much of the equipment as he could, but was left with a $300 popcorn machine gathering dust in his dining room. He cleaned it off for his daughter’s graduation party — its last hurrah before his wife asked him to throw it out the next day.

When a girl at the party inquired if he had any sweet popcorn, he said “no,” but glanced at the cotton candy booth next to him and got an idea. He started doctoring up the popcorn with sweet syrups and gave his creation out to the girls to take home.

The next day, phone calls started coming in: the girls’ parents all presumed that the popcorn had been purchased and wanted to buy their own. They were dumbfounded to learn that Yankey made it himself. They asked him to make more — they’d pay for the popcorn!

Yankey wanted to help them out, but he also already had a job as a musician. He still did what he could — working well into the night after coming home from work to make popcorn for those that asked. From there, things snowballed. Word of mouth brought in more order requests quickly, and Yankey needed help. 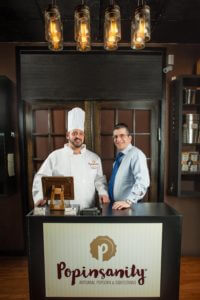 In the summer of 2013, a member of Yankey’s band recommended that he meet with Aaron Zutler, an old friend and fellow musician, who was also an experienced sales and marketing executive. He thought he might be able to help him bring his delicious popcorn out of his basement and onto store shelves around the US and beyond. The two worked together for two years researching the snack industry and flavor trends, sourcing quality ingredients and machinery, until they found a space where they could start production.

They then found the perfect location, but it was out of their price range. After multiple rounds of conversation back-and-forth, the landlord of the facility, Mike Rosenblum, asked why the duo was so interested in the space. They simply shared their passion for bringing Popinsanity to light, and that made an impression on him.

“Go after your dream,” Rosenblum said. He gave them the first three months rent-free and supported their endeavor fully. “Between that and Yankey’s father-in-law lending us money for the next six months of rent, we were able to do it,” Aaron explains.

This is by no means the only instance in which Popinsanity was supported by the utter kindness of others: “So many people took on a mission — not a job, even — to help Yankey and me,” Aaron says.

It was also at this time that Popinsanity got its name. They had contests for naming the company but nothing felt right. They then turned to customer comments to find new inspiration. One of the most common comments was “Wow, this is insane! It’s pareve? That’s crazy!!” Thus, Pop“insanity” was officially born.

Now named and ready to roll out, Popinsanity made appearances in premier kosher supermarkets and at Jewish events. The more popular they became, the more the orders came flooding in. While this stage was quite difficult due to the limitations of small-batch production, the duo made it work: Yankey took care of sourcing the ingredients, inventing the flavors and doing the actual popcorn-making and Aaron was in charge of all sales and marketing. 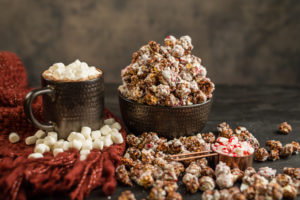 The artisanal popcorn brand began with seven incredible flavors. Now, that selection has more than doubled. Spanning from the classic sweet-and-salty to flavors like cinnamon swirl and s’mores, they developed a taste for every occasion and palate. New additions to their gourmet lineup include pecan praline and maple french toast.

At that point, 90% of Popinsanity’s business was Jewish. They hadn’t made it to mainstream American stores yet. Aaron was intent on breaking out of the kosher market and bringing this popcorn to a wider stage. In order to do so, though, the team needed additional expertise and talent. So Aaron reached out to his rabbi and mentor in Israel (who was visiting Monsey) and explained his growing pains. The rabbi listened intensely for two hours and asked very detailed and pointed questions about the business. After a long silence that seemed to go on forever, the rabbi looked Aaron straight in the eye and said, “I have the perfect solution.” But that was all Aaron got at that time. They said their goodbyes and his rabbi went back to Israel.

The next morning, an unassuming gentleman by the name of Yitz Joseph walked through the door. With him, came nearly four decades of product development and sourcing and manufacturing experience for luxury brands in more than 17 countries. An expert at forecasting consumer market trends and crunching numbers, he walked in ready to work. Yitz and Aaron had actually gone to yeshiva together under the guidance of the rabbi he met with. Aaron lost touch with Yitz, but Yitz and the rabbi remained very close so it was the rabbi’s brilliant idea to put them back together. So there, the dream team was solidified.

Collectively, it was decided to take Popinsanity to a gift show in Atlanta — rather than a food show — so their artisanal popcorn could stand out among many kinds of artists rather than be one of thousands of popcorn vendors. With a booth bedecked in chandeliers and plush carpets — and yes, the only artisanal popcorn business around — Popinsanity drew a considerable amount of attention, and began its journey from being something near-exclusively Jewish to all-American.

Aaron has plenty of stories about how this decision helped them get into supermarkets and high-end superstores. Nordstrom, Neiman Marcus and Saks Fifth Avenue in Canada bent over backward to get Popinsanity as a vendor.

With visibility at these premier locations, some of which catered to the wealthy and other elites, there came another stroke of hashgacha pratis (divine intervention) — the artisanal popcorn caught the eye of Oprah Winfrey’s team at a trade show and made it to the “Oprah’s Favorite Things” list in 2018. With that tremendous exposure and endorsement from one of the most popular and visible people in the world of media, Popinsanity’s popularity skyrocketed and became a national phenomenon. They’ve become specialists in corporate gifting and have sold to companies such as Google, HBO, Apple and Fox Sports as well as major fashion brands such as Louis Vuitton, Tiffany & Co. and Chanel.

Since being included on Oprah’s career-changing list, Popinsanity has quadrupled its production and is available internationally, in-person and online. The trio and their growing staff accommodate this boom by producing thousands of pounds of popcorn a week with the help of custom machinery — still at the same factory in Monsey. Only now are they opening an additional production facility that’s four times the size of their current factory. (Both are being run in tandem).

“I don’t take these opportunities for granted. People spend time, money and use consultants [to get into these companies]. Baruch Hashem many of these corporations have reached out to us. We know that Someone else is running the show from above. It’s a challenge to gain the interest of such internationally known organizations, with a yarmulke, no less. What are the chances of a company established only six years ago, by three orthodox Jews getting to sell their products to these high tier retailers and corporations?” Aaron shares.

“Honesty, integrity and love are what makes this dream team work,” he continues. “Plus, at the end of the day, we all know where this comes from. We all know where we got it and Who gives and takes everything — that’s Hashem.”

When the Popinsanity partners had the opportunity to go on TV, they initially questioned whether to wear a yarmulke. Aaron’s rabbi told them, “You need to show who you are.” So yarmulkes were and are always a staple part of their look whether they’re on screen or off. They interact with so many people who have never seen Jews before and have built tremendous relationships with buyers at trade shows across the country, constantly making a kiddush Hashem. 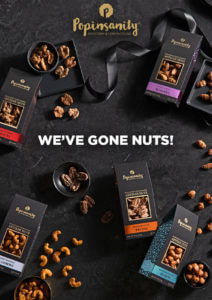 Popinsanity shows no signs of slowing down. This past fall, they started selling their product in 30 stores in Israel and launched a gourmet nut line that includes 13 flavors in five nut types (think spicy buffalo peanuts and maple roasted cashews, just to name a couple delectable options!) “The packaging looks like jewelry,” Aaron notes. The team also has plans to come out with a savory popcorn line incorporating seasonings like garlic and truffle, as well as Shichi-mi tōgarashi, a trending Japanese spice.

Today, they were featured on The Drew Barrymore Show for National Popcorn Day.

Popinsanity has never strayed from its roots as a kosher and Jewish endeavor. “People tell me that we were propelled by The Power of O [Oprah],” Aaron says. “We say that it was The Power of H [Hashem].”