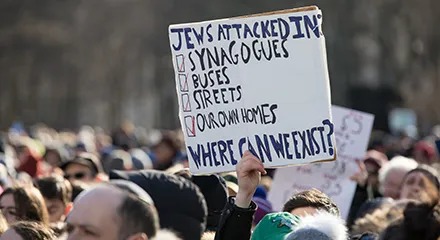 A report published by Americans Against Antisemitism takes a statistical look at antisemitic crimes in New York City between April 2018 and August 2022.

Overall, 194 recorded cases of antisemitic crimes in this period are divided into physical assaults (154) and verbal assaults (40). Out of all 194 cases, there were only two occurrences where the attacker was convicted and sentenced to prison, with under half of perpetrators having been arrested in the first place. 94% of victims in those four years identified as either Orthodox or Hasidic, and 78% of these assaults occurred within four neighborhoods in Brooklyn, all with large and identifiable Orthodox Jewish communities: Flatbush-Midwood, Crown Heights, Boro Park-Kensington and Williamsburg.

This element of the data contradicts what many political and policing parties insist: that an uptick in white supremacy is the major cause of hate crimes against the Jewish population. This is not to say that white supremacy isn’t a significant issue. This group has harmed Jews in the US, particularly in synagogue shootings, as well as many other racial and ethnic groups. At the same time, we must be able to verbalize all of the perpetrators of crimes against Jews. We can’t address a problem we won’t acknowledge.

New York City remains a relatively small sample size, despite the city having one of the highest density populations of Orthodox Jews in the country.

Independently of this specific report, the rate of antisemitic attacks are rising at an alarming and observable rate: Anti-Jewish attacks made up 60% of all hate crimes in New York City in November 2022, far more than against any other minority group. To look at the past year at large, there has been a 125% increase in antisemitic attacks in the city nearly every month over the course of a year, when comparing 2021 to 2022.

All in all, this begs the question: if most perpetrators of antisemitic assaults go unarrested, much less unpunished, what’s to deter more from continuing to act upon their uncalled-for hatred?