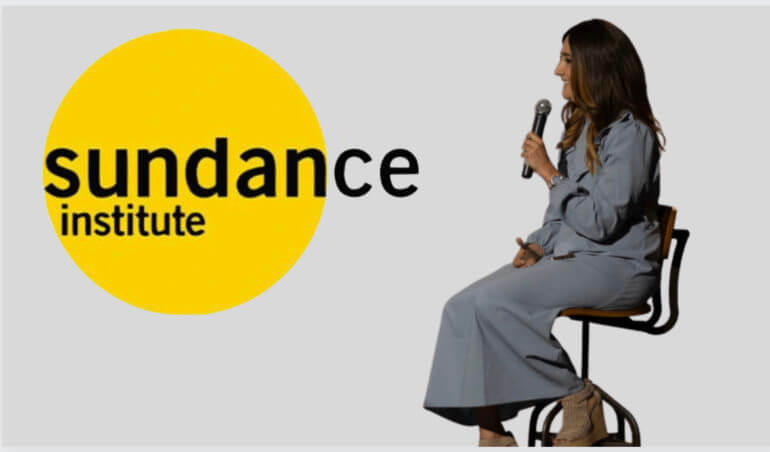 Jew in the City has been working tirelessly to get better representation of Jews on screen. Next stop on that journey: the Sundance Film Festival — the country’s largest independent film festival.

While so much work is going on to combat antisemitism behind-the-scenes within the TV industry, this is the first time JITC’s new Hollywood Bureau is discussing the issue with those in film.

The panel called #MeJew: Antisemitism, Authentic Representation, and Jewish Identity in Hollywood will be a conversation between JITC Founder Allison Josephs and Variety Features Editor Malina Saval. Malina wrote the award-winning article, Too Jewish for Hollywood: As Antisemitism Soars, Hollywood Should Address Its Enduring Hypocrisy In Hyperbolic Caricatures of Jews.

The two will discuss the belief that Jews are vastly overrepresented in Hollywood, why the representation is so inauthentic and how to change the current narrative — replacing rising Jewish hatred with pride. The panel will take place on Sunday, January 22 from 2-3:30. The general public can also attend even without tickets to the festival, by registering here. For those who won’t be there, the panel will be recorded and shared afterward.

Here, I sat down with Allison in a conversation to learn more about this notable event:

This is all so exciting. How did this panel come to be?

About a year and a half ago, I started learning that Hollywood has minority bureaus that advocate for accurate representation of their specific community on-screen. There was no bureau for Jews, though, which I thought was absolutely insane. Essentially, I looked around and learned from those bureaus about how they run and how we can start doing what they’re doing, and thus, our own Hollywood bureau was formed.

Part of that work we do includes going to a festival like Sundance and attending other major media events to work on more accurate representation. I realized if we want Jews to be a part of these conversations, we need to make sure that Jews are involved in the process! We got introduced to the Sundance people from another bureau, pitched a panel idea to them and they accepted us. As far as I understand, I don’t think anyone has done a panel on Jewish representation at Sundance before. There have been Israeli movies and Jewish movies, but this is the first time someone is recognizing that there is a problem in Jewish representation and saying we need to do something about that in a public way.

It’s so important. Ultimately, what do you hope to change with this panel

The work that we’ve done so far in the last year has really been flagging issues about Jewish representation and depiction in the world of television. We have to prove that we even belong in these conversations, fighting the stereotype that Jews are too powerful and don’t need help. Even other Jews believe that stereotype. As Orthodox Jews, we have an even bigger hurdle — to prove our humanity. That’s not a given, unfortunately. We need to show that Orthodox Jews are a group of people that shouldn’t look down at or belittle and instead, see us with the pride and humanity we see in ourselves.

So step one is explaining that Jews should be a part of the conversation and explaining the danger that is currently happening when we’re not with all the cases of rising antisemitism. Step two is education. We want to share concrete examples of the modern day tropes on screen — including horned Jews and Jews as vectors of disease — and talk about both why that is so damaging to see and what we should replace them with.

What would it look like if proud Jewish depictions became the new norm? As Jews, we get so excited when we see someone in media wearing a yarmulke in public, for example, or when a religious character shares Jewish wisdom on screen and is actually seen as normal. The bar shouldn’t be that low.

This year at Sundance there is actually going to be a film shown called Chanshi, about a woman who breaks free from the religious world and goes to Israel — it’s based on the story of the filmmaker. While we definitely understand that people go through treacherous experiences in religious environments — we have a whole branch of our organization devoted to helping those people (Makom) — they don’t make up the only stories. It’s a really challenging thing when people who have had the most abusive experiences are the ones with the microphones. That’s not Judaism when it’s practiced as it’s meant to be. That’s Judaism in an unhealthy way. We know people who want to get positive Jewish stories greenlit and are having a harder time doing that. So we need to find a pathway for proud and positive Jewish stories to be allowed to be told.

The dream would be to use these conversations to inspire people in the film industry to write positive Jewish characters into future movies and for studios to be more accepting of them. When they think about positive minority depictions in film, we want them to include Jews too.

What can others do to help this issue?

I don’t think we can end antisemitism without a spiritual component to it. It’s not just about education. There’s a spiritual element of Jewish people meriting to get out of exile. So we also want to create moments that are a kiddush Hashem, or sanctifying God’s name. A chilul Hashem, or desecration of God’s name has an effect of people not wanting to be part of the Jewish people. That’s how we feel when we see people like Madoff or Harvey Weinstein and other religious characters getting arrested for horrible things.

When that’s all you see, it isn’t good. When you see Jews that are living up to values proudly, we feel inspired and want to be like them. We’re hoping to create worldwide inspiration and any way Jews become a kiddush Hashem in their own lives is helping that cause.

We’re launching a Jewish pride campaign as well at Sundance for celebrities to wear their Jewishness proudly by going out in a way that’s identifiably Jewish. To have celebrities come out as a proud Jew and not feel shame or that they have to hide is so important and can inspire others to do the same. The campaign will be called #MeJew. Stay tuned for more!

What's The Difference Between Guilt, Regret And Feeling Like A Bad Jew?