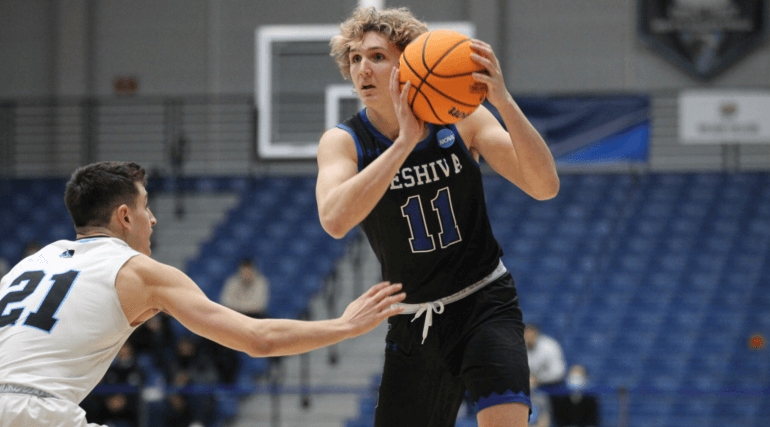 Ryan Turell is giving all Orthodox Jewish athletes more reasons to dream. This week he was selected in the G League draft, which is the NBA’s official minor league basketball organization. Turell will subsequently be the first Orthodox Jew to play in a G League game – in contrast to David Kufeld who was drafted to the Portland Trailblazers in 1980, but didn’t sign the contract because they couldn’t guarantee that he’d have off on Shabbos. Turell was drafted 27th overall by the Motor City Cruise, the Detroit Pistons’ affiliate in the G League.

A model to his peers, Turell was the leader of Yeshiva University men’s basketball team, the Maccabees, which is composed entirely of Orthodox Jewish players. The Maccabees boast a 50-game winning streak spanning multiple seasons; the 6’7” forward averaged 27.1 points last year for the team and was named 2022’s Division III Player of the Year. The 23-year old player had one season of college eligibility left when he declared for the draft in March.

His coach, Elliot Steinmetz (father of Jacob Steinmetz, the first Orthodox baseball player to get picked in the MLB draft) speaks highly of Turell’s character off the court as well.  “[He’s] An absolute gem of a person. I’ve never been around a kid who’s so good at what he does and at the same time so humble and so in touch with the fact that there are kids, and even adults, who look up at him and want his time,” Steinmetz says. “He’s so nice and so uplifting.”

Because the Maccabees play in Division III, the bottom tier of NCAA collegiate athletics, Turell’s chances of being drafted were lowballed. “Honestly, it’s been amazing to have all the support we’ve had on a Division III level, it’s just unheard of,” Turell states. “It’s just really inspiring to see that you can inspire so many people through basketball.”

His chances seemed even lower when an injury forced him to drop out of the G League’s scouting showcase in May, as well as the NBA’s Summer League in Las Vegas. However, Turell did not let the odds deflate his dreams: “They just motivate me to work even harder.”

While playing in the G League does not guarantee a spot in the NBA, it means Turell could be called up to replace an injured or underachieving player. He could also earn an opportunity to play off the bench later in the season.

Turell states that he plans to play games on Shabbat so long as he can walk from his hotel to the game, much like Jacob Steinmetz.

His goals are not limited to the NBA. Turell plans on eventually playing basketball in Israel. “It’s always been a dream of mine to go play in Israel, regardless of the NBA,” he says. “Even if I have a great career in the NBA, Israel is something I definitely want to do afterwards.”

An earlier version of this article erroneously named Ryan Turell as the first Orthodox Jew drafted to the NBA.

What Are The Basic Halachic Requirements For Tzniyus?