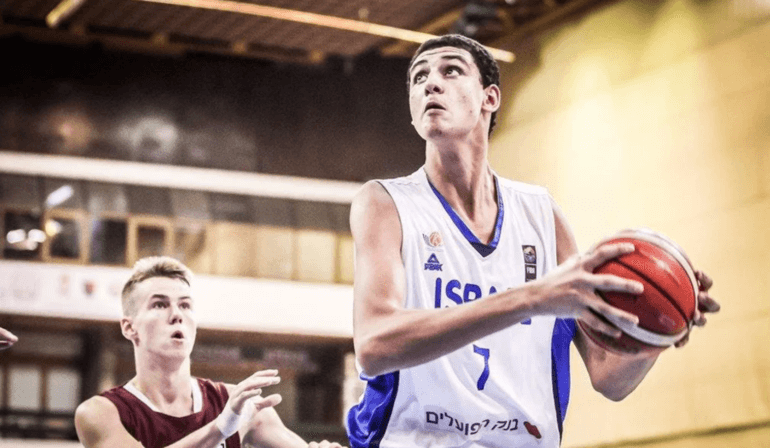 Israel is home to many marvels, but there is only one native giraffe: Gilad “Giraffe” Levy.

Levy, 20, is the tallest man in Israel at 2.20 meters (7’2”). When asked if he’s tall enough to play basketball, he shares a resounding yes: he will play with Hapoel Jerusalem this season, and has been training for the sport for four years. When he was 16, Levy moved to Spain to study at Estudiantes in Madrid, a developmental academy where he could play against opponents of a similar height.

The competition was fierce, but that was not the only obstacle he had to overcome. Levy is religious — he attended a religious elementary school and middle school, then moved to the Galilee and attended Gilboa/Maayanot academy, which has a more even mix of religious and secular students. He kept up with his Jewish lifestyle in Spain.

He prays every morning and his team is accommodating of his Shabbat observance. When it came to keeping kosher, he ordered kosher catering for the entirety of his first two years. Throughout the following two years he cooked for himself, purchasing kosher meat and fish from various shops in Madrid. Even when traveling for games and events — including Podgorica in Montenegro, where the FIBA U20 European Championship was held earlier this year — arrangements are made for his religious needs.

“I’m a big believer, I believe in God. I’m religious in every way…All the rest of the week we practiced at 9 P.M., but on Fridays the practice was at 3 P.M. so I’d have time to get ready and go to services and Shabbat dinner. In the mornings, I went to shul and afterward I ate lunch with an Italian Jewish family there who adopted me. On Passover, my family came to see me.”

Levy is now returning to Israel to complete his IDF draft, which he had previously deferred for two years. He received multiple offers from Israeli teams, but ultimately chose Hapoel Jerusalem. “It’s a place with a very big support system, a place that wants to get to every final and win titles. That’s something I’m aiming for. I want to be on a big team, to start to blossom and for people to know my name. The coach [Alexander Djikic] worked with Estudiantes in the past. I know about him, I’ve seen him. He and the new assistant coach [Sergeant Place] are known as coaches who have really nurtured players.”

Levy explains that he still has a lot to learn, and hopes that his new coaches and team will help him develop and advance his career. The boy who used to be teased for being “giraffe-like” is now embracing it and showing off the resilience and fearlessness he’s developed along the way.

“I’m not ashamed to say that I want to reach the NBA,” he says. “I have two more years to enroll in the draft. If not the NBA, then Europe, the EuroLeague, and of course the adult Israeli national team. I want to do big things like that.”

The Day I Didn't Die In The Sbarro's Bombing