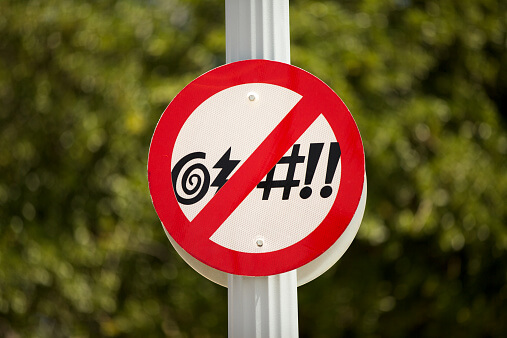 Why do the curses given on Har Eval soooo outnumber the blessings given on Har Gerizim? Why is there so much cursing in the Torah?

Thanks for your question. I have a lot to say about it.

First, the way you phrased the question “Why is there so much cursing in the Torah?” made me laugh out loud. I know what you mean but I couldn’t get over the image of Moshe accidentally kicking the leg of the coffee table and letting fly with a string of colorful epithets.

Before we do that, let me explain your question for the benefit of readers who may not know. In Deuteronomy 27, God gives instructions for after the Jews cross the Jordan: six Tribes were to stand on Mount Gerizim to bless the people. The other six Tribes were to stand on the adjacent Mount Eval to pronounce a curse. The Torah then explains that “The Levites will speak up, saying to everyone in Israel, in a loud voice, ‘Cursed is the one who makes a graven or molten image, an abomination to Hashem, the work of a craftsman, and sets it up in secret.’ And all the people shall respond, saying amen” (27:14-15).

The Leviim go on to express curses for people who commit a number of misdeeds and the people are to respond amen to each one. These include those who: disrespect their parents; move their neighbor’s boundary marker; mislead the blind; pervert the justice due to converts, orphans or widows; are sexually intimate with their own father’s wife, an animal, their own sister or their own mother-in-law; strike others in secret; take a bribe to execute innocent people; and don’t uphold the words of the Torah in general.

So all of these things earn a person curses – including the last item on the list, which is a catch-all for all the mitzvos in the Torah. But what do we have to do to earn blessings?

But what about those of us who don’t run red lights, who do pay our taxes and who haven’t murdered anyone? What do we get?

Nothing. You get punished for breaking the law but you don’t get rewarded for obeying it. If you want to be honored at a testimonial dinner, you’re going to have to do something above and beyond the call of duty, like dedicating a wing to the children’s hospital. Nobody’s going to give you a medal because you didn’t embezzle.

What a dilemma our shuls and schools would have trying to choose honorees if our choices included Bob (for not tripping any blind people), Fred (for not having intimate relations with his mother-in-law) and Pete (who didn’t accept any bribes to execute innocent people)! Honestly, that’s a pretty low bar for behavior. I don’t know about your community but where I live, we kind of expect that no one is perverting the justice due to orphans or being intimate with livestock, no additional incentive required.

So, when you look at it that way, it absolutely makes sense that one is cursed for violation but not blessed for observance.

Here’s the part where I flip the script. The Torah mentions blessings and curses but then goes on to only list the curses. Rashi on Deuteronomy 27:12 cites the Talmud in Sotah (32a), where this ceremony is fleshed out. As we mentioned, six Tribes stood on Har Gerizim and six stood on Har Eval. The kohanim, the Leviim and the aron stood between the two mountains. They would turn towards Har Gerizim and say, “Blessed is the one who doesn’t make a graven or molten image…” and all the people would respond amen. They would then turn towards Har Eval and say, “Cursed is the one who makes a graven image…” and everyone would respond amen. The Leviim would turn from mountain to mountain expressing a blessing while facing Har Gerizim and a corresponding curse while facing Har Eval. So while it’s not explicit in the Torah, there were in fact as many blessings as there were curses.

Now, we’ve already illustrated that the military won’t give you a medal for not going AWOL and your parents won’t give you a cookie for not breaking a window, and that makes perfect sense. But as it turns out, God will bless you for not making idols and for not moving your neighbor’s property line.

As far as the curses “soooo outnumbering” the blessings, we see that here there’s actually a one-to-one correspondence. But consider the next chapter: Deuteronomy 28 includes the tochacha – the rebuke – that tells us what will happen if we don’t follow God. The Torah spends 14 verses telling us the rewards we’ll reap for compliance, followed by 54 verses describing the curses for disobedience. This certainly seems skewed but I don’t think it is. I’ll explain why.

Let’s assume that one of the penalties God sends for violating the Torah is illness. But how many types of illness are there? One might suffer (God forbid) from asthma, lymphoma, leukemia, an abscess, hearing loss, gingivitis, renal failure, etc., etc., etc. There’s a virtually infinite number of medical conditions from which one might suffer. The opposite of all of these is simply “good health.”

Similarly, a bountiful crop is concise. The opposite, however, could manifest in a variety of ways, from a flood to a drought, and from locusts to a blight. The reality is that a curse has more potential manifestations than a blessing.

Also, keep in mind that curses for rebelling against God didn’t come all at once; they came in stages. This may not be apparent in Deuteronomy 28 but it’s explicit in Leviticus 26, which is the first time we are told the tochacha. There, after just two verses naming potential consequences, God tells us that if we still don’t listen to Him, He’ll add additional consequences. Two more verses of bad stuff follow, again capped with “if you still won’t listen, I’ll have to do more….” This happens several times in the first tochacha.

God’s modus operandi, He tells us, is to send smaller troubles first as a sign to examine our deeds and change our ways. If we don’t take the hint, He turns up the heat and the troubles gradually intensify. So the curses in the tochacha don’t represent an all-or-nothing onslaught of troubles. Rather, they’re a series of scenarios, which we have the ability to abort at any time.

(Please keep in mind that we can’t say that a specific individual got sick because they spoke lashon hara, that somebody died because they treated Shabbos casually or that a hurricane hit a particular area because they promoted promiscuity. None of us have that ability and it’s just plain rude to blame the victim by suggesting that they’re responsible for their own troubles. All of us can use our troubles as an opportunity for introspection but no one can point fingers at another and suggest that we know why they “deserved” it.)

Remember, God’s attribute of mercy far outweighs His attribute of punishment. He rewards good deeds for 2,000 generations but only punishes misdeeds for up to four generations – and that’s assuming that the offender’s descendants persist in his bad behavior (Exodus 34:7). Rashi cites the Tosefta that we see from this that God’s beneficence outweighs His retribution by a factor of 500.

Similarly, we struggle for a limited time in this world, for which we are paid an infinite reward in the next. We get what we earn, both in this world and the next, but no matter how you slice it, I think you’ll find that God’s blessings – many of which He gives us for free – ultimately outweigh any curses that one might bring upon himself through bad behavior.