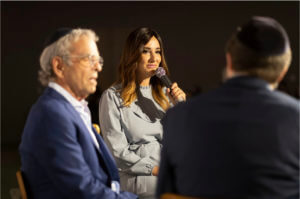 We live in a world with a lot of confusion. On a regular basis, we see innocent people suffer and evil people prosper. Even when life isn’t explicitly unfair, we often don’t see the behind the scenes workings of the universe. We see only a small snippet of reality from a very narrow vantage point. My family recently got a chance to perceive the connectedness between the seemingly disconnected. Moments like this I like to think of as a wink from God. No, these moments are not proof of faith and they don’t undo the very real pain we experience when we don’t get the wink. But they do provide a glimmer of hope: maybe there is always a Master Plan that, while we are not privy to most of the time, exists nevertheless.

I shared this story last week at Lifetown, a 53,000 square foot center built for kids with disabilities that creates a simulated Main Street for kids to learn in and play in. The event was to thank some of the volunteers who come to Lifetown, in this case, the Friendship Circle community. Lifetown and Friendship Circle Livingston were built/started by Zalman and Toba Grossbaum, a Chabad couple who has been living in the area for over 20 years. The story begins in 1996 when Zalman got his cheek swabbed by Gift of Life at the Jewish Renaissance Fair. For 20 years, he didn’t think about the fact that he had put himself on a bone marrow registry, but then in 2016, Gift of Life reached out. He was a perfect match to a man named Michael, who had been told he only had a year to live after being diagnosed with Lymphoma.

Michael, a man in his 70’s, was living in Florida with his wife when he got the devastating news. He stayed hopeful and told his doctor he was going to mess up the statistics on his prognosis. When Michael heard there was a perfect bone marrow match for him through Gift of Life, he pictured the guy was 6’2″ and in impeccable shape – a linebacker, more or less. While the donor and recipient info was sealed for a year, as soon as the information was able to be exchanged, both sides agreed to meet. Zalman, though great in deeds and inspiration, did not have the physical physique Michael had pictured!

Zalman just happened to be in Florida, where Michael lives, when he found out Michael’s contact info. As soon as he got Michael’s number, he called him and told him he was down the block! The met shortly afterwards and a lifelong friendship emerged. In fact, after spending time together, the two realized that they had met a few months before Michael was ever diagnosed. A few months beforehand, Zalman was asked to run a shiva at the home of one of Michael’s deceased friends. They met briefly in the kitchen and then Michael had to run and catch a plane. We are told in the Talmud (Megillah 13b) that God provides the Refuah (the cure) before the Makkah (the ailment). Perhaps this brief encounter occurred so that Michael could see that the plans were already in place before he got the terrifying news.

The second part of the story involves my family. I met Zalman in 1997 – just a few months after his cheek was swabbed. My story is one of being spiritually saved. A triple murder in my childhood school caused me to begin to question the purpose of life at only 8 years old. For 7 years, I suffered from minor panic attacks and off and on insomnia, believing life was pointless. In my teens, I began to explore Judaism as a possible purpose of living.

I grew up near where Zalman and Toba live and one of my friends used to bring me to their house for Shabbos as I was becoming observant. Being in their warm home, eating Toba’s yummy challah and cholent and playing with their adorable kids, were some of my earliest and fondness moments in starting my journey to observance. I eventually got my sisters and parents to come for Shabbos meals as well. They all became observant one by one after that. The Grossbaum’s impact on my religious journey was so noteworthy, that a few years later, when I got married, I asked Zalman to recite one of the Sheva Brachos (traditional seven blessings) under our chuppah. After our wedding, my husband and I spent some time learning in Israel and we lost touch with the Grossbaums until we reconnected when Lifetown came to fruition.

So how do these seemingly disconnected stories meet? Well, a year ago, one of my employee’s husbands decided to take his small side genealogy business to become his full time career, and I knew he was very good at what he did. I told my parents that they should hire him. They had dabbled in genealogy here and there, but why not take a good thorough look at our family’s stories? As they began to do this work, my father reached out to some relatives he had lost touch with, including a first cousin. Now my father only has four first cousins in the world, so it’s surprising to lose touch with any of them. But my father’s uncle tragically died in his 30’s and my father’s aunt moved away with her kids after that and the families grew apart. 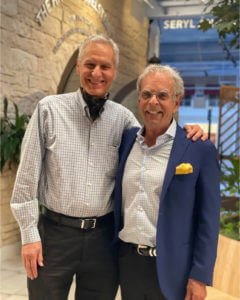 The last time my father saw his cousin was fifty years ago. As my father reached out to his cousin to see if he had any family photos or family trees, they updated each other on the last five decades of their lives. My father explained that we had all become observant, which was surprising, because my father and Michael came from very secular families. Michael had his own surprise. Michael explained that he had  a serious cancer diagnosis but his life saved by an observant Jew named Zalman Grosssbaum. Since we lived in the area and were now religious, he wanted to know if we knew Zalman. My father was dumbfounded. He told his cousin we did in fact know Zalman. He told Michael, “Zalman saved your life physically and helped save my family’s life spiritually!”

Watch the video above all the way to the end for a remarkable end to this story.

Were the Jews Forced to Accept the Torah?