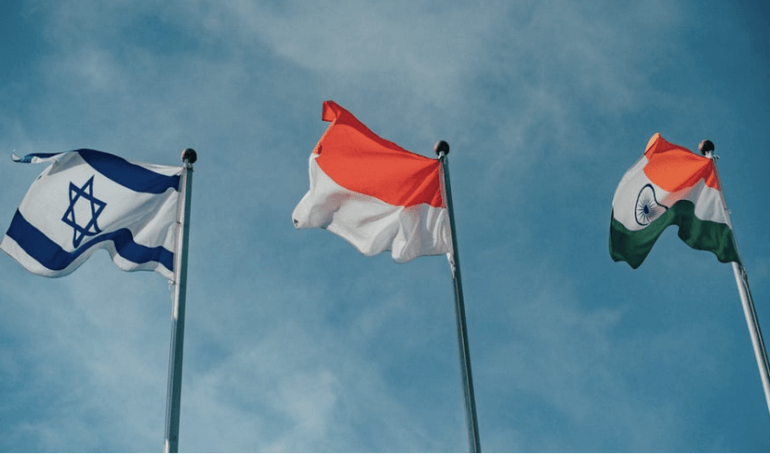 One of my favorite parts of any Olympic Games is the Parade of Nations during the opening event. Something is riveting about how each country’s athletes walk together, united by their uniforms and costumes, proudly waving their nation’s flag. It is an incredibly patriotic moment.

There is something intoxicating about cheering on sports in general. People who normally wouldn’t interact or see each other as similar suddenly join, wearing their team’s colors, singing the same songs and experiencing a collective euphoria — or mourning, depending on the outcome. In a world that increasingly values individuality, sports events remain an acceptable avenue through which one may blend with others to create something much larger: a solid entity with the pure intention of supporting their team.

As we experience another round of drama and competition, I find myself reflecting on the Parade of Nations and how it reminds me of another national parade.

When the Jewish people emerged from slavery and took to the desert, they too walked in a choreographed formation. Each shevet, tribe, traveled together in a grid surrounding the Mishkan, the Tabernacle, and like our modern athletic teams, a unique flag represented each one. Yehuda, Yissasschar, and Zevulun were to the east in front of the Mishkan. Reuven, Shimon, and Gad walked from the southern side. To the west were Menashe, Ephraim, and Binyamin. Finally, Dan, Asher, and Naftali came from the North.

Traditionally, the shevatim embodied different characteristics. Each had an individual tribal strength that set them apart. They also represented twelve different paths a person could take to come close to G-D. By positioning them equidistant from the Mishkan, Hashem conveyed their equal relationship with Him, regardless and because of their differences. They continue to serve as a model of diversity in Jewish thought and practice.

This is a part of the great tragedy of the Lost Tribes. When Assyria exiled all the tribes except for Yehudah, Binyamin, and some of the Levi’im, we lost all they contributed to making us a whole nation, including learning from the unique ways in which they expressed their connection to Hashem and the Torah.

Today, it is rare to know with certainty which tribe a person is from. While one might reason that they must be from one of the three tribes the Assyrians left behind, there are varying opinions regarding whether or not any or all of the tribes returned during the last 2000 years. According to some, they will never return, according to others they have already returned, and still others say that some have and some haven’t — and those were just the positions taken during the Mishnaic times! Various groups have identified as potential tribes in the last few decades, leading to debate each time. So unless you’re one of the lucky few who can trace your ancestry back with certainty (Kohanim and Levi’im, for example), there’s a possibility you may be from any one of the tribes.

As a child, I would fantasize about which tribe I might belong to, especially when I felt a connection with a particular Biblical personality, like Michal from the tribe of Binyamin. It’s a fun exercise, even if there’s no real way of knowing for most of us until Moshiach comes. As the Winter Games come to an end, I’d like to invite readers to try this game for themselves. I’ve collated below some information about each tribe, like the gemstone that represented them on the High Priest’s breastplate and the symbol found on their tribal flag. I’ve also summarized their strengths and characteristics based on the blessing they received from Yaakov as he lay on his deathbed. As you read about each of the shevatim, see if any of the descriptions resonate with you. Do you think they’re your ‘team’? I’d love to hear which tribe you feel you belong to and why!

Tribal Character: Reuven was the first born, a status which usually brings a double blessing. However, as Yaakov relates in his blessing to Reuven, Reuven lost his portion due to an “impulsive” act. He is compared to water, which rushes recklessly forward. However, water is also a source of life and energy; the Torah is compared to water. So this comparison does not mean Reuven is destined to be a destructive force. If harnessed appropriately, the strength of water can be a means of creativity.

Tribal Character: In his blessing, Yaakov relates incidents in which Shimon and his descendents take part in violent actions. He is depicted in terms of his anger, and Yaakov prays that this intense rage be dampened. To accomplish this, the tribe of Shimon was scattered throughout the other portions. The members of the tribe were often traveling teachers and scribes, focused on eking out a livelihood and caring for their families.

Tribal Character: Levi was Shimon’s “partner in crime” and similarly had his anger cursed and his descendants scattered. However, the tribe of Levi earned itself the position of priests when they alone did not join in the sin of the Golden Calf. They were able to withstand the pressure, and were rewarded. Even though they too did not have a portion in the land of Israel — they were free from material concerns — the rest of the nation supported them through various tithes so they could devote themselves to lives of service.

Tribal Character: Yehudah inherited malchus, or kingship. His descendant David became the head of the enduring Jewish dynasty that will one day return. Just as Yehudah showed humility when confronted by Tamar and selflessness when his brother Binyamin seemed in danger, the model of Jewish leadership is to rule with humility and selflessness rather than power.

Tribal Character: Yissachar was marked by his scholarship — Yaakov compared him in the blessings to a strong-boned donkey that can carry a heavy load, which Rashi explains refers to the Torah (Genisis 49:14). Later descendents included many members of the Rabbinical court, the Sanhedrin. This tribe partnered Zevulun, who supported them while they stayed in the halls of study. The learning of Yissachar merited both tribes.

Tribal Character: Yaakov refers to Zevulun living by the seashore. They became merchants who traded far and wide, and they used this talent to support others in learning. To this day, there are those who model these tribes’ partnership, with those who are successful in business choosing to invest in others’ Torah learning. As a reward for their support, Zevulan was blessed with riches from the sea, such as the rare chizalon creature from which a special dye was made.

Tribal Character: Dan is characterized by judgment and vengeance. Rashi (Genesis 49:16-17) connects Yaakov’s blessings to Dan’s descendant Samson, who served justice to the Philistines. Dan as a tribe is marked by objective judgment and a willingness to act on the results of it as needed.

Tribal Character: Naftali is represented by a fast-moving gazelle. At the time of Yaakov’s death, Naftali ran from the Maharat HaMachpela to Egypt to bring back the cave’s deed and prove his father’s right to be buried there. As a tribe, they were the runners in battle, and because of their swiftness, brought back reports of victory ahead of the army’s return. They are seen as independent, and as the bearers of good tidings.

Tribal Character: Gad were elite fighters. They worked in groups, and served as both the vanguard and rearguard during Jewish battles. They exposed themselves the most to enemy fire, working to protect the rest. This tribe is not afraid of war: they are ready to fight for their beliefs and values.

Tribal Character: The tribe of Asher was blessed with an extraordinarily fertile portion of Israel. They were particularly blessed with olive trees which produced an abundance of oil. Having extra means not having to worry about subsistence. It means being able to develop a personality that can and knows how to enjoy things, because you have the time and resources available to do so.

Yosef was given a double portion of tribes, represented by his two sons, Menashe and Ephraim. Both tribes are characterized by their and their father Yosef’s ability to thrive in a foriegn environment (Egypt). They were able to retain their own identity regardless of immense pressure around them. Menashe and Ephraim represent staying true to the Torah’s moral compass despite the confusion the world presents.

Tribal Character: Binyamin and his descendants are noted by their modesty — their ability to cultivate their inner selves and connect to Hashem through quiet, subtle thought and action. Notable examples of this are the matriarch Rachel, King Shaul, and Queen Esther. For his own ability to hold his tongue when necessary, Binyamin merited the portion of Israel that contained Jerusalem and the holy Temples. Additionally, Yaakov compares Binaymin to a “ravenous wolf” in his blessings, hinting to the fact that Binyamin’s strength was a dogged ability to hunt, consume and internalize holiness.