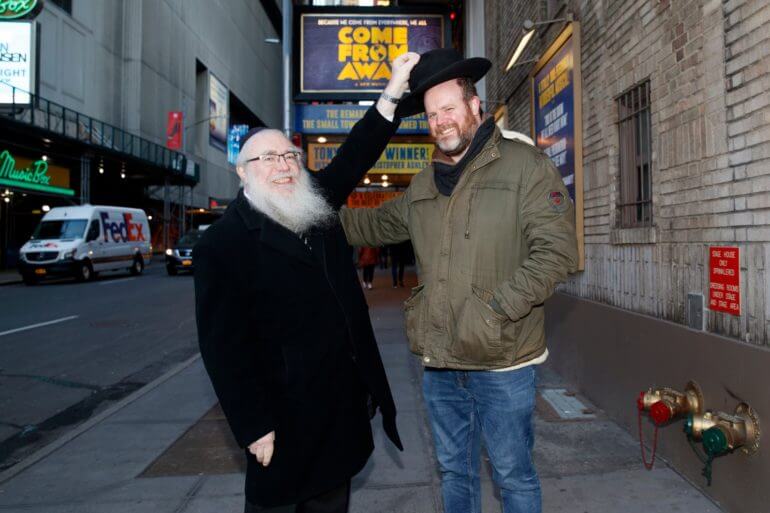 The Broadway musical, Come From Away, features a Chabad Rabbi who was a spiritual guide to passengers in a plane that was diverted on 9/11. More than four years after the show debuted, the actor who plays the rabbi met his muse! Come From Away tells the true story of 7,000 passengers who unexpectedly landed in Gander, a small town in Canada, when all air travel had to reroute after the Twin Towers were hit.

One person among those passengers was Rabbi Leivi Sudak, the head of Chabad in Edgware, London. On 9/11, Sudak was taking a flight to New York to visit the grave of Rabbi Menachem Mendel Schneerson, commonly known as the Ohel. His plans were diverted when the plane landed in Gander.

Sudak is played by actor, Paul Whitty, and in the musical, he wears a knitted kipa and modernclothing. Two of Sudak’s encounters with Gander locals appear in the play.

In one scene, an older gentleman, Ed, meets and confides to Sudak about being a Holocaust survivor after keeping it a secret for many years. They talk for a while and as they part ways, the Rabbi gives Ed a kippah. While their encounter ends here in the musical, Sudak and Ed remained close and stayed in touch until his passing a few years ago.

In the second scene, a town official noticed that Sudak was not eating any food. In reality and in the musical when Sudak explains his kosher dietary needs, the official gives him access to a kitchen. Sudak makes kosher food for himself and for the other Jewish people who were stranded with him. He goes the extra mile to make vegetarian and Halal meals for those with other dietary restrictions.

While these scenes were both in the musical, Sudak tells Whitty more of the details during their meetup. Whity says, “It’s a real honor to get to tell this story and an honor to hear the story firsthand. I’m very emotional right now. That is a lot to process.”

Sudak was very excited about the musical, but he says that unfortunately, he could not see it himself because “A Jewish man should not be listening to other women’s voices singing.” However Sudak says “his wife, mother and daughter have all been to see the musical,” and they loved it.

While Sudak has not visited Gander since his accidental arrival there, he says, “I wave from the window every time I fly over.”