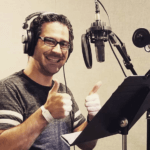 Acting isn’t an easy profession, all the more so when you are an Orthodox Jew. But to be an award-winning actor that’s also Shabbos-observant? Elliot “Eli” Schiff might be one of the only ones in the world. After winning not one, but two awards at this week’s SOVAs (Society of Voice Arts and Sciences), Schiff sat down with Jew in the City for another installment of Seven Questions With. Here’s what he said.

If You’re Freaking Out About Omicron, Here’s Why There’s Hope

This Orthodox Jewish Ice Skater Will Represent Israel at the Olympics